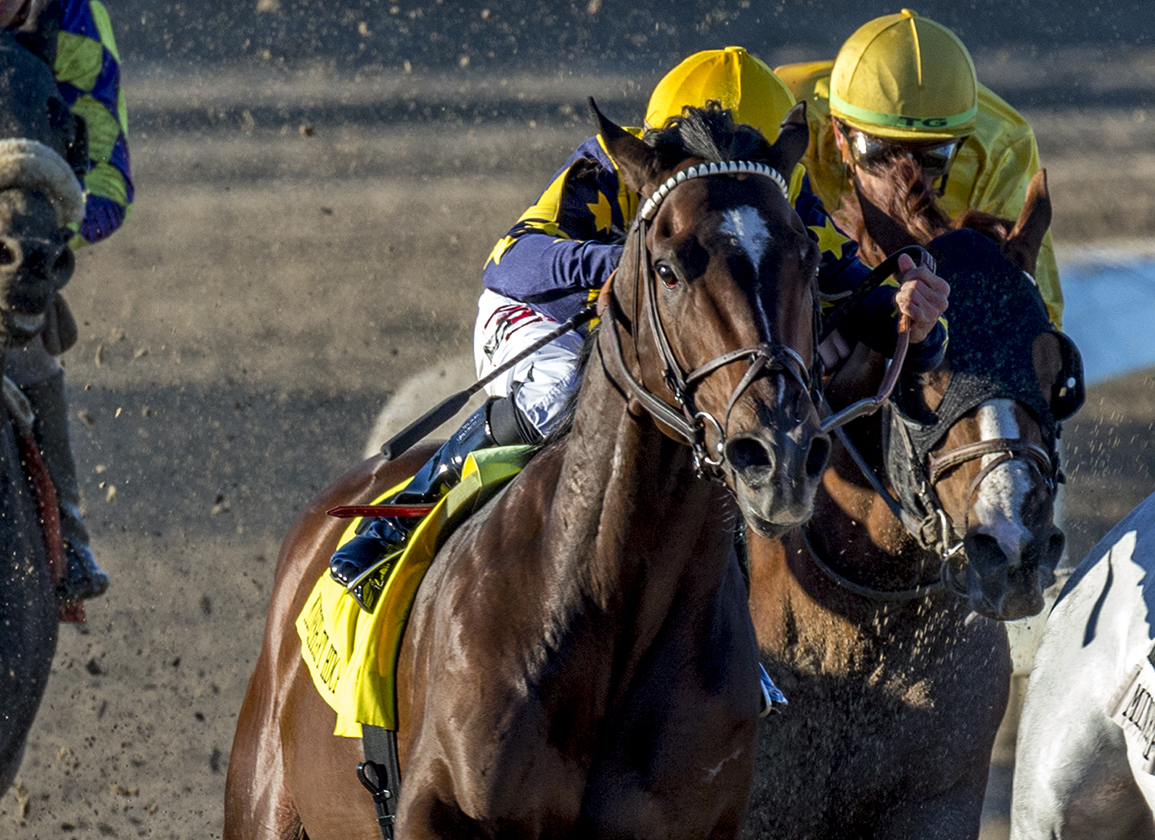 Triple Crown season might be heating up but the well-bred handicap divisions are keen on having a say in how the big stage shapes up. Here's who's been shouting the loudest this week.

Stonestreet Gold Again a Rising Star…
The famous silks have done it once more, this time with Marsalis (Curlin) adding another 'TDN Rising Star' accolade to GISW Hot Dixie Chick's already impressive tally as a broodmare. Full-brother and New York's Leading Second Crop sire Union Jackson also claimed Rising Stardom in his racing days; while half-sister Pauline's Pearl (Tapit) added a victory in the GIII Houston Ladies Classic S. and a second in the GII Azeri S. to her million-dollar resume. Considering the dam also earned the TDN seal of approval, this female family really seems to enamor us in all the best ways and what's better than a Rising Star producing more Rising Stars?

A Titan Among Us…
With freaky-fast Olympiad (Speightstown) either breaking track-records or just missing them two races in a row en route to graded stakes victories, LNJ Foxwood's 'breeding stars' momentum doesn't look to be going away any time soon. The brilliant colt is one of his sire's 63 graded winners, and 128  black-type earners. The $700,000 KEESEP grad is bred on the same cross as MGISW Rock Fall (Speightstown), who tore through five victories in a row in 2015 including the GI Vosburgh and Alfred G. Vanderbilt S. in the Empire State.

It's Not This Time all the time…
The 2022 racing season is still young, but Not This Time has already begun to stake his claim as one of the most exciting young sires in the States. Counting GII Louisiana Derby winner Epicenter, Melody of Colors S. winner Last Leaf, and Midnight Stroll waltzing home in the Stonehedge Farm South Sophomore Fillies S. this past weekend, the stallion has 18 black-type winners. Taking into account his 144 lifetime starters as of calculation Mar. 28, he's hitting 17.36% stakes horses (25), 12.5% stakes winners (18), and 4.17% graded winners (6).

Where does the time go?
American Pharoah is about to enter a new stage of his breeding career…being a broodmare sire. And so, the ever elusive construct thus continues to move ever forward. With the retirements of As Time Goes By and Merneith, the ranks of blue-blooded broodmare prospects with him in the pedigree grow: the former in particular bred for success being out of Broodmare of the Year Take Charge Lady (Dehere) and a half to sires Will Take Charge (Unbridled's Song) and Take Charge Indy (A. P. Indy). As Time Goes By is expected to visit Into Mischief. Merneith ends her career Grade I placed and a multiple graded-stakes winner with no immediate stallion plans announced.

Japan takes over the world one race at a time…
Anyone who has tracked November auctions the past several years was not surprised when Japanese horses either won or hit the board in five of six open stakes on the Saudi Cup card bar one…the main event. We were even less surprised when they parlayed those incredible results into an even bigger Dubai World Cup night: winning, dead-heating, or placing in every single race minus the G1 Al Quoz Sprint and the Dubai Kahayla Classic, the latter they had no entries. Japanese connections have been scooping up quality American bloodlines for decades including, perhaps most famously, Sunday Silence, who went on to be 10-time Champion Sire in the country. Now the Land of the Rising Sun could set their eyes once again on the GI Kentucky Derby with Crown Pride (Jpn) (Reach the Crown {Jpn}), a great-grandson of the aforementioned legend through his sire. His trainer already willing after his G2 UAE Derby victory secured a spot in the gate, should the ownership group agree, a Japanese-bred descendant of Seattle Slew and Kingmambo will be in the starting gate on the first Saturday in May. As an added note on the American influence here, Crown Pride's dam was recently bred to Nadal (Blame).