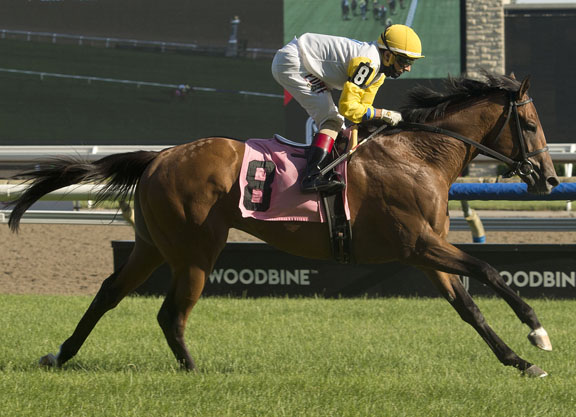 Despite facing more seasoned rivals in Saturday's GIII Marine S. at Woodbine, Shirl's Speight (Speightstown) looms large in the traditional primer for the Queen's Plate, scheduled for Sept. 12. Sent off at 3-1 for a trainer not typically known for his first-time starters, the Roger Attfield trainee took control in the early going of the seven-furlong turf test July 4 and rolled home an emphatic eight-length winner under Rafael Hernandez, becoming a TDN Rising Star in the process. The Charles Fipke hombred is out of Perfect Shirl (Perfect Soul {Ire})–a daughter of GISW Lady Shirl (That's Nice)–who annexed the 2011 GI Breeders' Cup F/M Turf.

On the other end of the spectrum, John Oxley's Lucky Curlin (Curlin) will be making his 10th start in the 1 1/16-mile contest. The Mark Casse-conditioned colt needed six tries to get off the duck at two, and finally earned the distinction via DQ in a sloppy six-panel affair at the Fair Grounds in December. Off the board in a pair of stakes at the New Orleans oval over the winter, the homebred came from off the pace to score last time in Etobicoke over the Marine's course and distance June 14.

“He's a horse that's disappointed me, to be honest,” said Casse. “We were always thinking, 'If he ever gets his act together..' He was a horse early on that we thought was as good as [Grade III winner] Enforceable [Tapit]. And of course, Enforceable is going to the [GI] Kentucky Derby.”

“His last race, from a Beyer standpoint, was very good. I wasn't surprised, but it was pleasant. He's been extremely frustrating for us because we've had high hopes for him. There are horses whose abilities are limited. He hasn't been that way. So, we'll see how he handles two turns. I'm still not positive that he isn't a come-from-behind sprinter. But we're going to give it a try.”

Among Queen's Plate eligible runners is Dotted Line (Signature Red), listed at 18-1 in the Queen's Plate winterbook. The winner of three starts in 2019, including a pair of stakes over the Tapeta, the Sid Attard trained gelding finished fifth in Woodine's seven-panel Queeneston S. against fellow Ontario breds July 4.