TDN Rising Star Mihos Gets Up in Mucho Macho Man 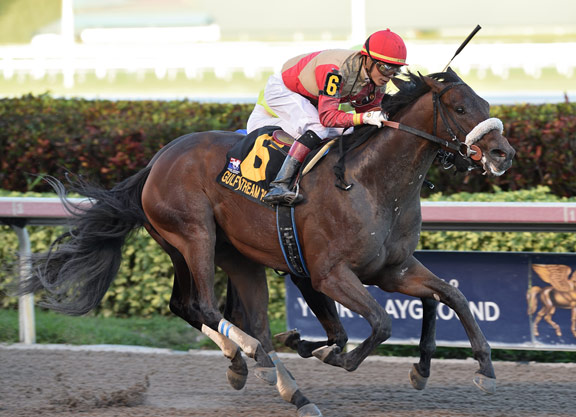 Third on debut behind next out graded winner Vekoma (Candy Ride {Arg}) at Belmont Sept. 23, Mihos earned the 'Rising Star' nod next out when earning his diploma at Aqueduct Nov. 24. Installed as the second choice behind the much-hyped Code of Honor (Noble Mission {GB}), the bay bided his time at the back of the pack, running alongside the favorite through a :23 flat opening quarter. Those two advanced up the outside in unison to sit mid-pack with Code of Honor just ahead of Mihos through a half in :45.42. Trophy Chaser hit the front at the top of the stretch and tried to run away with it, but Mihos charged up the outside to collar that rival in the final strides for a neck success. Florida-bred Garter and Tie rounded out the trifecta with Code of Honor fading in the lane to be fourth.

“He was resolute, that's for sure. That's kind of typical of him,” trainer Jimmy Jerkens said. “The first two races, he kept coming. Even when he looked like he didn't have the best of it, he gives himself a little breather and then comes again.”

“We were a little wide the whole way,” said winning rider Jose Ortiz. “Code of Honor was on my inside and I tried to make a move. I tried to run with him. I thought he was the horse to beat. I thought it would take a lot of speed to catch Trophy Chaser. When we got to the 3/16ths, my horse switched leads a little late. Trophy Chaser got away from me a little bit, but when he changed leads and I hit left-handed and he gave me a great kick. He had a target in front of him and he kept coming.”

As for the beaten favorite, Hall of Famer John Velazquez said, “He was going easy, but at the quarter-pole he took a deep breath and let the bridle go.”

Mihos is the second foal out of Feline Flatline, an unraced half-sister to GISW Sharla Rae (Afleet Alex). She produced a Summer Front filly in 2017 and a Speightster colt in 2018. Feline Flatline was bred back to American Freedom. Click for the Equibase.com chart or VIDEO, sponsored by Fasig-Tipton.