TDN Q & A: Taylor Made's Travis White on Mshawish & Not This Time 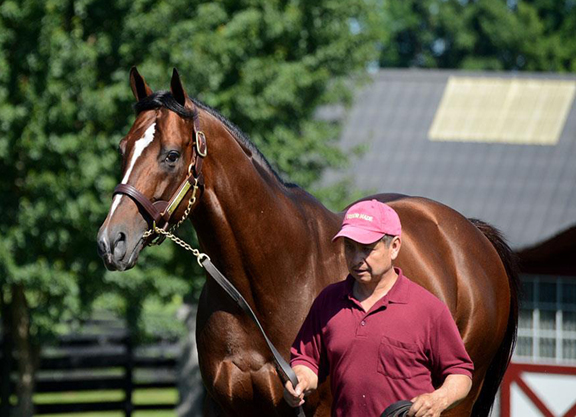 Taylor Made had three rookies in their stallion barn in 2017 with the fruits of those labors heading to the yearling sales this summer and fall. Multiple Grade I winner Mshawish (Medaglia d'Oro) has one yearling in next week's Fasig-Tipton Saratoga Sale, as well as three in Fasig-Tipton's New York-Bred Sale, as does GI Breeders' Cup Juvenile runner-up Not This Time (Giant's Causeway). Travis White, stallion nominations manager for Taylor Made, discusses with why these two young first-crop yearling sires are such standouts.

TDN: Mshawish had an interesting career. He was a stakes winner at three in France, a Group II winner at four in Dubai, and a Grade I winner at five in the U.S., all on turf. Then he switches to dirt at the end of his 5-year-old season and what happens?

TW: We took notice of [him] when he ran fourth in the GI Cigar Mile H. on his first try on the dirt. He just got beat for the win. And he actually put his head in the lead there toward the end of the stretch. So that's kind of when he got on our radar. And then obviously, he followed that up with a very impressive win in the GIII Hal's Hope S. and then went on to win the GI Donn H. which really put him on our radar screen.

TDN: The Donn was particularly an eye-catching race. He was already a Grade I winner on the turf; what made him such an exciting prospect on the dirt?

TW: If you go back and watch his races, he could really be anywhere in the race. He didn't have to be on the lead. He could sit mid-pack and be covered up. But he had a very good turn of foot, kind of push button. And when he turned for home, he just really accelerated and put away a pretty good bunch of horses there at the end.

TDN: Was it a real selling point to breeders to have a horse as accomplished as he was on different surfaces?

TW: For us, as a stallion operation, it was a very important factor to have. A Grade I winner on the dirt and turf, plus the fact that he was by Medaglia d'Oro, played a huge impact on us as far as how much we wanted to try to get this horse.

TDN: Physically, how is he built?

TW: His best attribute is probably his balance. He's a very, very well-balanced, proportioned horse, and I think that's probably why he was as good as he was on the racetrack. He's about 15.3 hands. He has a very pretty head, he's a great mover on the end of a shank. But overall, I think his balance is the key thing there.

TDN: What did you see in his weanlings last year?

TW: They were a lot like him. I mean, just very well balanced, square behind, great movers. Most of them were very, very dead correct and with good bone to them, good substance. Overall, I think they're just a lot like him, and they're not complicated horses at all.

TDN: Have they improved even more as yearlings?

TW: From what I've seen so far, the same traits have carried over as weanlings to yearlings now. They're still just very good movers, very balanced horses, very pretty heads, good neck, good shoulders, square behind, just the stuff you like to see in a very quality yearling.

TDN: What type of buyers do you think will be gravitating toward his yearlings?

TW: I think that you'll see a combination of a lot of different buyers gravitate toward him. I think trainers will like him because they look like good, solid, just sound horses. And I think they'll be very precocious as well.

TDN: Mshawish's race career was kind of a slow burn that exploded at the end, but Not This Time was a star from the start. He was raised here on the farm?

TW: Yes, we've had his mother, [graded winner] Miss Macy Sue (Trippi), since retirement. She has been probably one of the better mares on the market currently. [Her son] Liam's Map (Unbridled's Song) is an absolute very, very good-looking horse and a beast of a racehorse. His performance in the GI Breeders' Cup Dirt Mile was unbelievable. That carried on with Not This Time being such a standout racehorse as well.

TDN: Not This Time's career was brief due to a soft tissue injury, but he made it count.

TW: Second time out at Ellis Park he just romped by ten lengths. It was completely dominating the field. He just kept getting better and better as time went on. [In his next start, the GIII Iroquois S.], he beat a very, very good field and just completely put them away down the stretch, [winning by 8 3/4 lengths]. He beat [the next year's GI Kentucky Derby runner-up] Lookin At Lee (Lookin At Lucky) and [future graded stakes winner] Recruiting Ready (Algorithms) in that race. It was a highly regarded 2-year-old field as a Breeders' Cup prep race.

TDN: His final start was the GI Breeders' Cup Juvenile. What made it such a stellar performance in spite of the neck defeat?

TW: He just relaxed early on, was kind of covered up on the backstretch, but then that move he made around the final turn and into the stretch was just so impressive. He was wide the whole way and just ran out of space there at the very end. A fantastic race.

TDN: How has he been received by breeders?

TW: He was probably the easiest sell that I have had here since Unbridled's Song. He is very imposing. He is big. Dark bay, almost black. Big, leggy, scopey, two-turn horse, has a great, long, thin neck and well-defined shoulder. Breeders just absolutely loved the horse from day one.

TDN: Not This Time had yearlings sell for up to $200,000 at Fasig-Tipton's July sale. What do you expect going forward?

TW: We're very optimistic going into the sales. He's a horse that just got better with time and age, and I see his yearlings are kind of [going down] the same path. They're big, they're two-turn, scopey horses that I think a lot of buyers will like.