TDN Look: A Young Man, an Old Man, a Second Chance, and a Dream 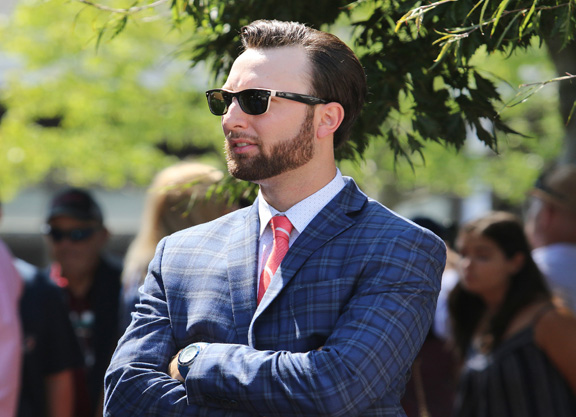 Cameron Beatty was at that stage in life–young, healthy, athletic, motivated, naive–where he never even imagined the possibility that everything he had could be taken away from him. He was the starting quarterback at Freehold Township (NJ) High School and had accepted an offer to play at Fairleigh Dickinson, where he had an academic scholarship. He was going places, and on the fast track.

In an instant, everything changed.

In 2010, Beatty, now 27, was on his way to the gym to workout when he had a motorcycle accident so serious that it nearly cost him his life. He suffered a brain injury, a ruptured spleen and internal bleeding. At first, the doctors did not realize the extent of the spleen injury and the bleeding it was causing, but when his heart rate dropped to under 20 beats per minute he was rushed into emergency surgery.

“I woke up one morning bleeding to death,” he said.

It was a windy, grey morning on the backstretch at Monmouth Park as Beatty told his story. He was there not just to talk about his accident but about the horse he owns, Horologist (Gemologist). The New Jersey-bred is coming off an upset win over 2018 Eclipse Award winner Jaywalk (Cross Traffic) in the GIII Monmouth Oaks and is preparing for the biggest start of her career, the GI Cotillion S. Sept. 21 at Parx. Life is good now. He's married, got his degree from New Jersey City University, recovered from his accident to the point where he was able to play semi-pro football and owns a valuable and talented horse.

What does one story have to do with the other? Everything.