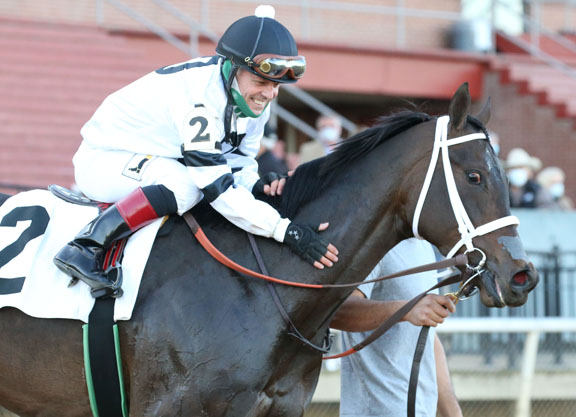 Will's Secret enters the Top 10 at No. 3 after her GIII Honeybee S. win | Coady

It was an eventful weekend on the road to the GI Kentucky Oaks, with major preps at Aqueduct (Busher Invitational S.), Oaklawn (GIII Honeybee S.) and at Santa Anita (GIII Santa Ysabel S.). The winners of all three of those races have made their way into our Oaks Top 10. Kalypso (Brody's Cause), who was third in the Santa Ysabel, drops out as trainer Bob Baffert has said he won't point her to the Oaks.

There's nothing on tap for the 3-year-old fillies this weekend but there will be a huge race Mar. 20 as the top two on our list, Clairiere (Curlin) and Travel Column (Frosted), are set to meet in the GII Fair Grounds Oaks.

Hall of Fame trainer Steve Asmussen has had a lot of success in the Kentucky Oaks, winning it in 2005 with Summerly (Summer Squall) and in 2014 with Untapable (Tapit). Both fillies won the GII Fair Grounds Oaks on their way to the winner's circle at Churchill Downs and now Asmussen takes the same path with the talented daughter of Curlin. Since 2005, five winners of the Fair Grounds Oaks have gone on to win the Kentucky Oaks, including Rachel Alexandra (Medaglia d'Oro). Received a ton of support in the Kentucky Oaks Future Wager, where she is the 7-2 favorite. Still must contend with rival Travel Column, who beat her in the Golden Rod S. and lost by just a neck in the GII Rachel Alexandra S.

A classy filly from the Brad Cox barn, Travel Column worked a sharp five furlongs Saturday, posting a bullet :59.20 workout. An $850,000 purchase at the Fasig-Tipton Saratoga yearling sale, she could be the Oaks favorite. All she has to do to achieve that is defeat our No. 1 horse, Clairiere, in the Fair Grounds Oaks. The two are very evenly matched. She broke her maiden at Churchill in September, so the track surface will not be an issue come Oaks day.

A newcomer to the top 10, Will's Secret jumps all the way up into the third spot off of a win in the Honeybee. Winning for the third straight time, she enjoyed a perfect ride from Jon Court, who got her to the lead and then slowed the pace down to a walk. They went the half mile in 49.70. Filly has faced Clairiere once, finishing third behind her in an October maiden race at Churchill Downs. Court, at age 60, will be looking to win the Oaks for the first time. Trainer Dallas Stewart won the Oaks in 2006 with Lemons Forever (Lemon Drop Kid).

Has a lot of upside but also has a lot to prove. The Shadwell Stable homebred was explosive in her debut, winning by 7 1/4 lengths and came right back to win the GIII Forward Gal S. at seven furlongs. It's worth noting that her dam (Asiya) never won beyond seven furlongs. Trainer Todd Pletcher said she may go next in the Fair Grounds Oaks, which is setting up to be a bear of a race. Closed at 28-1 in the Oaks Future Wager.

Missed her planned start in the GII Davona Dale S. after she had a minor problem and missed some training time. It looks like she will come back in the GII Gulfstream Park Oaks, where she will have to play catch-up. Whatever was bugging her is in the past as she has had two workouts since Feb. 28. The latest was a five furlong breeze on Saturday. Still, might not be the best way to go into the Kentucky Oaks, off just one prep. Like Zaajel, is owned by Shadwell Stable. Cost $1.05 million at Keeneland September. Her dam won the Gulfstream Oaks by an incredible 21 3/4 lengths before finishing fourth as the favorite in the 2013 Kentucky Oaks.

A little late to get going, but trainer Kenny McPeek appears to have her ready after working four times at Gulfstream Park. Her scheduled start in the Mar. 27 Gulfstream Park Oaks comes after she finished fourth as the odds-on favorite in the GII Golden Rod S. in November. Like Malathaat, she will have only one prep for the Kentucky Oaks, which might not be the best way to go into the race.

Her race in the Davona Dale, where she was ninth and beaten a city block, remains a mystery. What happened? Trainer Butch Reid said there's nothing new to report on his Eclipse Award-winning filly and that her next race has yet to be picked out. Coming off a terrible race and with not much time left before the Oaks, it's no certainty she will make the race. But we will keep her in the Top 10 until the connections say the Oaks is not in her future. Can you draw a line through her last race or not?

It's been an odd year for the California-based 3-year-old fillies. No one has stepped forward to claim the top spot in the division and most of the fillies racing there have yet to run a big speed figure. The latest to emerge is Beautiful Gift, who earned an 87 Beyer when winning the Santa Ysabel. There were only four horses in the race and three were trained by Bob Baffert. Scored a narrow win over Moraz (Empire Maker), who was just a head back at the wire. A win in Santa Anita Oaks would solidify her standing as the top 3-year-old filly based in Southern California.

A very interesting prospect from the barn of Chad Brown. Made just her second lifetime start in the one-mile Busher Invitational, which she won by a half-length. She didn't beat the best field, but she showed a lot for a horse who had merely broken her maiden and had never raced beyond six furlongs. “I like the way she galloped out and I think she's going to be a good filly in the future. Two turns will be even better,” jockey Javier Castellano said after the win. The Gazelle, which is next, is run at a mile-and-an-eighth and will be an important test for the daughter of Flatter.

Looks like the second best 3-year-old filly in the Steve Asmussen barn. She didn't break her maiden until Feb. 12, and didn't take much money when making her stakes debut in the Honeybee. At 18-1, ran a sharp second behind Will's Secret. A Stonestreet Stables homebred, she is by Tapit, which means she probably hasn't peaked. Dam Hot Dixie Chick (Dixie Union) won the GI Spinaway S. in 2009 for Asmussen. She never won beyond seven furlongs or was even tested at a distance longer than that.