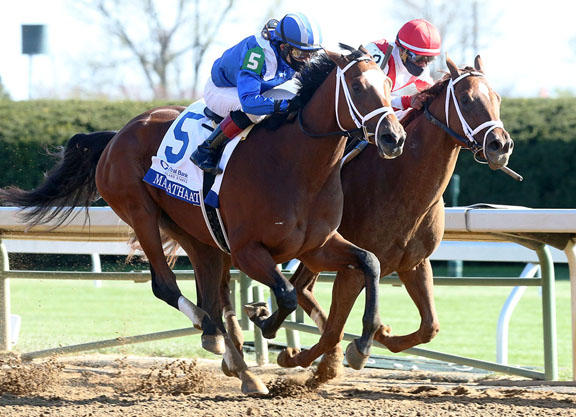 After the busiest weekend of the year for 3-year-old fillies eyeing the GI Kentucky Oaks, the field is pretty much set for the race. There were four preps over the weekend, which was a problem. There are not enough top horses to go around to fill that many races, so the fields were six, six, six and four. It looks like the Oaks will be highly competitive. There is no one standout. Instead, you will have a number of horses in with a chance and a favorite who should be in the 3-1, 7-2 range.

2) MALATHAAT (Curlin–Dreaming of Julia, by A.P. Indy)
'TDN Rising Star' O-Shadwell Stable. B-Stonestreet Thoroughbred Holdings (KY). T-Todd Pletcher. Sales History: $1,050,000 ylg '19 KEESEP. Lifetime Record: GISW, 4-4-0-0, $412,150.
Last Start: 1st GI Central Bank Ashland S., KEE, Apr. 3
Accomplishments Include: 1st Tempted S., AQU, Nov. 6
Equineline PPs. KY Oaks Points: 110
If Travel Column isn't the Oaks favorite, Malathaat will be. She had a few bumps in the road, which kept her sidelined until she made her reappearance in the GI Ashland S. at Keeneland. It was worth the wait. She appeared beaten at the head of the stretch as Pass the Champagne (Flatter) opened up by four lengths on the field, but Malathaat was able to run her down to win by a neck. For obvious reasons, trainer Todd Pletcher is very high on her. “She's a really special filly,” he said. “She's been great since day one. She was a spectacular yearling which is why she cost what she did ($1.05 million). She's a joy to train and she is so professional.” Will come into the Oaks having had one prep, perhaps not the ideal way to prepare for this race.

3) SEARCH RESULTS (Flatter–Co Cola, by Candy Ride {Arg})
O-Klaravich Stables Inc. B-Machmer Hall (KY). T-Chad Brown. Sales History: $310,000 ylg '19 KEESEP. Lifetime Record: GSW,
3-3-0-0, $299,000.
Last Start: 1st GIII Gazelle S., AQU, Apr. 3
Accomplishments Include: 1st Busher Invitational S., AQU, Mar. 6
Equineline PPs. KY Oaks Points: 150
Is a lot like Malathaat in that she is undefeated and lightly raced. Cemented her spot as one of the Oaks favorites with a 2 3/4-length win in the GIII Gazelle S. at Aqueduct. Her time for the mile-and-an-eighth was slow (1:54.14), but was actually faster than males ran in the GII Wood Memorial, which went in 1:54.49. Everything about her suggests that trainer Chad Brown will have her ready for an improved effort in the Oaks. She's improved with every start and her best race to date came in the Gazelle in her first start around two turns. Will be ridden by Irad Ortiz, Jr., among the hottest jockeys on the planet.

4) CLAIRIERE (Curlin–Cavorting, by Bernardini)
O/B-Stonestreet Stables (KY). T-Steve Asmussen. Lifetime Record: GSW, 4-2-2-0, $350,492.
Last Start: 2nd GII Twinspires.com Fair Grounds Oaks, FG, Mar. 20
Accomplishments Include: 1st GII Rachel Alexandra S. presented by Fasig-Tipton, FG, Feb. 13; 2nd GII Golden Rod S., CD, Nov. 28
Equineline PPs. KY Oaks Points: 94
With the big wins over the weekend from Malathaat and Search Results, she drops down two spots in our rankings. The main thing she has going for her is that she's almost as good as Travel Column. She has faced that filly three times and shows a win in the Rachel Alexandra and two second-place finishes. The main thing she has going against her is her running style. She has no early speed, which will make her vulnerable if there is not a fast early pace in the Oaks. Trainer Steve Asmussen will be shooting for his third career win in the Oaks.

5) PASS THE CHAMPAGNE (Flatter–Champagne Taste, by Distorted Humor)
O-R. A. Hill Stable, Black Type Thoroughbreds, Rock Ridge Racing LLC, BlackRidge Stables LLC & James Brown. B-Preston Madden (KY). T-George Weaver. Lifetime Record: GISP, 3-1-2-0, $115,170.
Last Start: 2nd GI Central Bank Ashland S., KEE, Apr. 3
Equineline PPs. KY Oaks Points: 40
An interesting new face on the trail to the Kentucky Oaks, she makes her debut in our top 10 off a big effort in the Ashland. Making her first start beyond seven furlongs and around two turns, the private purchase nearly pulled off what would have been a mild upset, but couldn't hold off Malathaat in the final yards. Has never run a bad race. Will likely need to improve further to win Oaks, but that is very much a possibility for the underrated George Weaver.

6) PAULINE'S PEARL (Tapit–Hot Dixie Chick, by Dixie Union)
O/B-Stonestreet Stables (KY). T-Steve Asmussen. Lifetime Record: GSW, 5-2-1-1, $461,500.
Last Start: 1st GIII Fantasy S., OP, Apr. 3
Accomplishments Include: 2nd GIII Honeybee S., OP, Mar. 6
Next Start: GI Kentucky Oaks, CD, Apr. 30
Equineline PPs. KY Oaks Points: 120
The second part of a potent double from the team of Asmussen and Stonestreet Stables, she's been doing everything right of late. Dismissed at 18-1, Clairiere's stablemate was a sharp second in the GIII Honeybee S. before winning the GIII Fantasy S. at Oaklawn as the 4-5 favorite. Surprisingly, the Fantasy did not come up very strong this year, so she might have just have been taking advantage of weak competition. Unlike a lot of Asmussen horses, she was not particularly precocious–especially considering her dam was a GIII Schuylerville S. and
GI Spinaway S. winner. Unlike Clairiere, she has enough tactical speed to suggest that she will get a good trip in the Oaks.

8) SOOTHSAY (Distorted Humor–Spellbound, by Bernardini)
O-Claiborne Farm, Perry R. Bass II, Ramona S. Bass & Adele B. Dilschneider. B-Raydelz Stable (KY). T-Richard E. Mandella. Lifetime Record: GSW, 2-2-0-0, $276,600.
Last Start: 1st GII Santa Anita Oaks, SA, Apr. 3
Next Start: GI Kentucky Oaks, CD, Apr. 30
Equineline PPs. KY Oaks Points: 100
When Moonlight d'Oro (Medaglia d'Oro) went to the sidelines shortly after winning the GIII Las Virgenes S., it appeared that Hall of Fame trainer Richard Mandella had lost all chance to win the Kentucky Oaks. But he's back in the running, thanks to Soothsay. Making just her second lifetime start and coming off a maiden race, she jumped up with a half-length win in the GII Santa Anita Oaks. She'll be one of many in the Kentucky Oaks with little experience, but there's no doubt that she has some talent. “We expected a lot of her from the first start and from that start until now, she just grew up,” said Mandella. “You kind of see it happening. Otherwise, we wouldn't do something like this.”

9) BEAUTIFUL GIFT (Medaglia d'Oro–Sea Gift, by A.P. Indy)
O/B-Baoma Corporation (KY). T-Bob Baffert. Lifetime Record: GSW, 3-2-0-1, $99,600.
Last Start: 1st GII Santa Anita Oaks, SA, Apr. 3
Accomplishments Include: 1st GIII Santa Ysabel S., SA, Mar. 7
Equineline PPs. KY Oaks Points: 90
While Bob Baffert is always tough in Grade I races, he's probably not going to win this year's Kentucky Oaks. But his best shot comes in the form of this daughter of Medaglia d'Oro. She scored a gritty victory in the GII Santa Ysabel S. before coming back to finish second behind Soothsay in the Santa Anita Oaks. Everything about her says that she is a good filly, but maybe not good enough to beat the very best of her division. John Velazquez, who is getting more and more business from Baffert, has the mount.

10) ADVENTURING (Pioneerof the Nile–Questing {GB}, by Hard Spun)
O/B-Godolphin (KY). T-Brad Cox. Lifetime Record: SW, 4-2-1-1, $131,370.
Last Start: 1st Bourbonette Oaks, TP, Mar. 27
Equineline PPs. KY Oaks Points: 50
Can she run her best race on the dirt? That's the question Adventuring will have to answer after winning the Bourbonette Oaks over the Tapeta surface at Turfway Park. She did break her maiden on the dirt and is 1-for-3 on that surface. Like Essential Quality, she is owned by Godolphin and trained by Cox. With Florent Geroux committed to Travel Column, will need a new jockey for the Oaks. Will be a lonsgshot in the Oaks, but not a hopeless one.