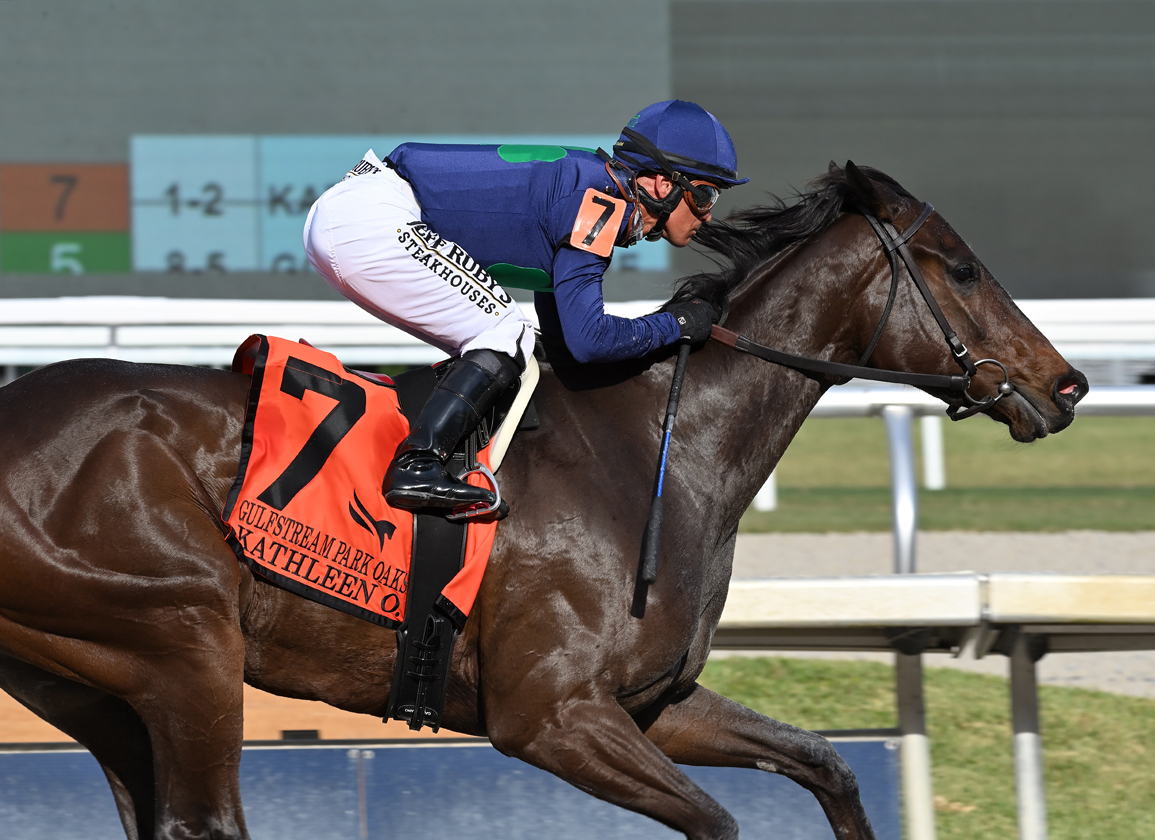 The GI Longines Kentucky Oaks will be overshadowed by the GI Kentucky Derby, but maybe that shouldn't be the case. The Oaks is absolutely loaded, perhaps the deepest in many years. In any other year, Secret Oath (Arrogate), Echo Zulu (Gun Runner), Kathleen O. (Upstart) or Adare Manor (Uncle Mo) would be an obvious heavy favorite. This year, a horse like the undefeated Kathleen O. might be third choice in the wagering at, say, 7-2 or 4-1. After a busy Saturday last week, which included Secret Oath's third-place finish against the boys in the GI Arkansas Derby, it will be another busy week for fillies eyeing the Oaks, kicking off with Friday's GI Central Bank Ashland S. at Keeneland. Saturday's action will include the GIII Gazelle S. at Aqueduct and the GII Santa Anita Oaks.

After his filly failed to win the Arkansas Derby, trainer Wayne Lukas confirmed that Secret Oath will go next in the Kentucky Oaks. That's the right call. She needed to win the Arkansas Derby to warrant a start against males on the first Saturday in May. Though she didn't win, she turned in a terrific performance when facing the boys. Once she wound up last and wide down the backside, she was in trouble. An eye-catching middle move took her all the way to second position in the stretch, but she couldn't sustain her bid. Afterward, Lukas said that jockey Luis Contreras will keep the mount for the Oaks. Based on her solid performance in the Arkansas Derby and all the hype she garnered for her three dominant efforts before that–most of it justified–she'll probably be the favorite in the Oaks. It's been 32 years since Lukas has won this race. It would have been a better story had she gone in the Derby, but it will be hard not to root for the Coach to pull this one off.

What a nice filly. She's 4-for-4 and has been visually impressive in each of her starts, the most recent being the GII Gulfstream Park Oaks. It wasn't a tough race and the only horse in there that possibly could have beaten her was Goddess of Fire (Mineshaft), who finished second. But she did everything right…again. She sat back early, started rolling approaching the far turn and then ran away from the competition in the stretch to win under a mild drive.

“She has strong power at the finish,” winning rider Javier Castellano said. “I like the way she did it today, nice and easy with a strong finish. She has a lot of potential. I think she's going to be fun in the future.”

Hall of Fame trainer Shug McGaughey has done a masterful job bringing her along. Her first three Beyer numbers were, in order, a 67, a 78 and then an 85. That raised the question as to whether or not she was fast enough, but that was put to rest when she improved again and ran a 98 Beyer in the Gulfstream Park Oaks. Going into this weekend, that's the fastest number among all the fillies eyeing the Oaks. Can she improve some more? Yes. Does she have to improve to win the Kentucky Oaks? Maybe not.

An undefeated champion and she may not be the favorite in the Kentucky Oaks, which tells you what an incredibly strong group this is. There is so much to like. She was brilliant last year and is in the hands of Hall of Famer Steve Asmussen. She has never lost. But…How good was her comeback race? That is the question. For the first time in her career, she had to work for the win, beating Hidden Connection (Connect) by just a nose as the 1-10 favorite. The Beyer number was not great–the 88 was the slowest of her career. So, there are two schools of thought: 1) She has not improved from last year and it will catch up to her in the Oaks; 2) Asmussen didn't have her at all cranked up for her 3-year-old debut, she learned how to fight in the Fair Grounds race, and will run much better in the Kentucky Oaks. Which will it be?

She's been out of sight and out of mind since winning the GIII Las Virgenes by 13 lengths all the way back on Feb. 6 for then trainer Bob Baffert. But, let's not forget, that was a huge performance and it earned her a 94 Beyer. Baffert elected to give her some time off afterward and gear up for this Saturday's GII Santa Anita Oaks. With Baffert's suspension pending, she's been in the barn of new trainer Tim Yakteen for about two weeks. Last Saturday, Yakteen sent her out for a five-furlong work in 1:00.20. The trainer change shouldn't be a concern. Baffert did most of the heavy lifting to get her to this point and Yakteen is perfectly capable. She could easily win the Santa Anita race in a blowout fashion, which would mean she'd come to Churchill Downs as hot as any horse on this list. She has no points because Baffert trainees weren't eligible to earn points in any of the preps. She'll likely need to run first or second Saturday to make it in, but that shouldn't be a problem.

Another horse we haven't heard from in a while, Nest is the 2-1 morning line favorite for Friday's Ashland at Keeneland. She is the deserving favorite, but it's not an easy spot as the competition includes the very fast Happy Soul (Runhappy) and the Brad Cox-trained Interstatedaydream (Classic Empire), an 8 1/4-length allowance winner on Mar. 13 at Oaklawn. Trainer Todd Pletcher has really taken his time with this filly. After she beat a very good field in the GII Demoiselle on Dec. 4, she didn't show up again until besting some tomato cans in the Feb. 12 Suncoast S. at Tampa Bay Downs. That race proved little. For her, the Ashland is the real test, and should she win it, she'll be yet another horse who might have been favored in any other year only to go off at 5-1 or 6-1 in this year's Oaks.

Finally, her big test. Happy Soul drew post six for the Ashland, a race that will go a long way toward deciding her future. We know she can run. She won her last three starts by a combined 26 1/4 lengths. But those were all held at a six furlongs or shorter and her sire was an Eclipse Award-winning sprinter. Having to stretch out to 8 1/2 furlongs for the Ashland will pose a huge test. Is she a Kentucky Oaks horse or a horse who belongs in sprint races? Coming off a win in the Dixie Belle S., where she completed the first quarter in :21 1/5, she should go right to the lead in the Ashland and play a game of catch-me-if-you-can. We know Jim McIngvale will be rooting for her.

If someone other than the big three or four is going to win the Oaks, it may just be this filly. She's been a little up and down in her career. She looked like a star in the making when winning the GII Pocahontas S. by 9 1/4 lengths last September, but then was outrun in the GI Breeders' Cup Juvenile Fillies. She followed that with a fourth-place finish as the 2-1 favorite in the GII Rachel Alexandra S. That made it look like she wasn't quite good enough to compete against the very best, but then she rebounded with a big effort in the Fair Grounds Oaks to almost pull off the upset against Echo Zulu. The good Hidden Connection will have to show up for her to have any chance in the Kentucky Oaks, but there's every chance that can happen.

No matter how she fares this weekend, she figures to be double-digit odds in the Kentucky Oaks. Again, that tells you just how strong this field looks to be. A New York-bred who kicked off her career with back-to-back wins against state breds, including one in the Maid of the Mist S., the best race of her life was the only one she lost. She gave Nest the fight of her life when finishing second, beaten only a neck, in the GII Demoiselle. She followed that with a seven-length romp in the Busher Invitational. The New York route to the Kentucky Oaks is not always the strongest, but this one should emerge as the biggest threat among that contingent.

This daughter of Shackleford makes the list after winning the GIII Fantasy S. at Oaklawn. Would she have won if Secret Oath were in there? Probably not. She finished third behind Secret Oath, beaten 9 1/4 lengths, in the GIII Honeybee S. in her prior start. Most likely, she benefitted from the Fantasy being an easy spot. She did show a lot of talent when breaking her maiden, winning by 7 1/4 lengths back in September at Churchill. But she failed to back that up when a distant second, beaten 10 3/4 lengths, in the Rags to Riches S. Has earned her way into the Kentucky Oaks, but hard to see her being a major factor in that race.

Not sure what to make of this filly, who is unbeaten in four starts, but has never raced outside of Dubai. Also notable that since her last start, in the Feb. 18 GIII UAE Oaks, she has had only one listed workout. That was a four-furlong breeze in :49.10 on Apr. 1 at Palm Beach Downs for trainer Todd Pletcher. You can't blame her connections for giving the Kentucky Oaks a try, but this is not the sort of year where a mystery horse out of Dubai can win it. Would have to be something super special to pull this off.