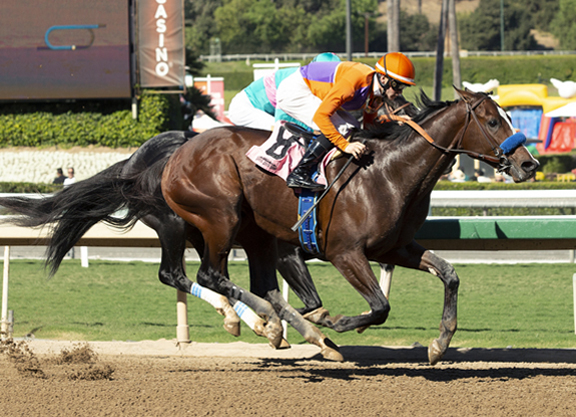 It’s the first installment of the 2020 TDN Derby Top 12, and chaos and uncertainty are the prevailing (but intriguing) themes. Betting favorites have gone down in defeat in the last seven “Road to the GI Kentucky Derby” preps, and there is no clear consensus on which 2-year-olds represent the top of the crop. But it’s plenty early–we’re 125 days from post time for the first leg of the Triple Crown.

1) THOUSAND WORDS (c, Pioneerof the Nile—Pomeroys Pistol, by Pomeroy)
O-Albaugh Family Stables & Spendthrift Farm. B-Hardacre Farm (Fl). T-Bob Baffert. Sales History: $1,000,000 yrl ’18 KEESEP. Lifetime Record: GSW, 2-2-0-0, $151,000.
Last Start: 1st GII Los Alamitos Futurity, LRC, Dec. 7
Next Start: Uncommitted.
Equineline PPs. KY Derby Points: 10.
Consider the lofty perch of Thousand Words to be more of an optimistic placeholder than emphatic assertion at this stage of the season. This $1-million KEESEP Pioneerof the Nile bay is undefeated in two starts, having debuted as a stalking sprint winner over 6 1/2 furlongs Oct. 26 at Santa Anita, then stretching out to two turns for a blinkers-on, pace-pressing score (over only three rivals and a sealed wet track) in the GII Los Alamitos Futurity. This colt earned style points by forcing an uncoupled stablemate through quick splits, yet still had enough fight and interest left to repel a stretch challenge from the runner-up in the GI Breeders’ Cup Juvenile, and Thousand Words galloped out stronger than that favored rival after the wire. No next-race prep has been etched in stone, but the GIII Robert Lewis S. or GII San Felipe S. have been mentioned as possibilities.

One side effect of Derby fever in recent seasons has been an unprecedented zeal to try top-level juvenile grass horses on dirt as sophomores. This $160,000 KEESEP pinhook, who re-sold for $850,000 at OBSMAR and capped a three-for-three season with a mature, capable win in the GI Breeders’ Cup Juvenile Turf, could make that transition because of the unflappable presence he displayed in two stakes starts. Two seasons ago the Juvy Turf produced three Derby starters (Mendelssohn, Flameaway, My Boy Jack), and last year War of Will parlayed a Juvy Turf fifth in into a trip-troubled Derby seventh before winning the GI Preakness. S. Trainer Chad Brown told TDN after the Breeders’ Cup that, “I’m curious to find out what he can do on the dirt in the spring. We’ve been running him on the turf because there are more distance races available to him than had we started out on dirt.” Structor’s poise in his first race against winners–holding off a cavalry charge in the GIII Pilgrim S.–is worth a watch in case you need a convincer about how well he handles pressure.

‘TDN Rising Star’ Dennis’ Moment will be squarely at the center of early-season Derby debates because the narrative for this $400,000 FTSAUG Tiznow bay contains elements that can be used to argue both for and against his chances. Supporters will view his prospects through the prism of “Dennis” being an athletically gifted 19-length maiden winner who dominated the GIII Iroquois S. in hand, then lost all chance when stumbling out of the gate and running last as the 9-10 favorite in the Breeders’ Cup Juvenile. Detractors will argue that Dennis didn’t beat any contenders of consequence in either his Ellis Park maiden romp or his September stakes win at Churchill, and it is a concern that the colt has now lost a rider and/or failed to come out of the gate cleanly in two of his four lifetime starts. Circle his planned soph debut Feb. 29 at Gulfstream as one of the most highly anticipated comebacks of the 2020 Derby campaign.

Maxfield’s 5 1/2-length clock-cleaning of the GI Breeders’ Futurity field at Keeneland Oct. 5 was flat-out the most visually impressive Derby prep race on the autumn schedule. Considering he had never before raced against winners or around two turns, it was ultra-impressive how this Street Sense Godolphin homebred settled, wove through the pack, then bounded outside and swooped past seven horses between the three-eighths and quarter poles before opening up big in the stretch under light encouragement. The reason Maxfield isn’t ranked higher on the initial Top 12 is because he’s recovering from surgery to repair a “mildly displaced” ankle chip, and he’s only up to farm training in Ocala right now before a scheduled return to trainer Brendan Walsh’s stable at Palm Meadows in several weeks.

Ajaaweed’s second, beaten only a half-length in the GII Remsen S., rates as one of those sneaky-good performances in which the runner-up ran more impressively than the winner. On a chilly Dec. 7, the final five races (including four stakes) at Aqueduct were won in wire-to-wire fashion, and this Curlin Shadwell homebred was allowed to settle near the back while wide on both turns behind a tepid tempo. Ajaaweed began to wind up for a serious run 2 1/2 furlongs out, uncoiling with a slow-burning grind before sparking into action when asked to pick up another gear three-sixteenths from home. This colt was the only foe making headway behind a speed-carrying winner who needed to be saved by the wire, and the remainder of the tired field was scattered behind the top two by open lengths.

After breaking his maiden by eight lengths on the turf at Golden Gate, the connections of Anneau d’Or wanted to take a shot at the Breeders’ Cup Juvenile Turf. As a Plan B hedge against getting shut out of that oversubscribed race, the colt was cross-entered in the Juvenile, and this $480,000 OBSAPR Medaglia d’Oro bay (RNA’d for $170,000 at KEESEP) ran a surprise second on the dirt at 28-1 despite being three or four paths wide on both turns. In the Los Al Futurity, Anneau d’Or managed to get pocketed in a four-horse field while taking kickback over a sloppy surface, and when he finally tipped out to a clear path and commenced a lumbering run, he got on even terms with (but never passed) number one-ranked Thousand Words. Trainer Blaine Wright told Horse Racing Nation that the Feb. 1 Lewis S., the Feb. 15 El Camino Real Derby, and the Mar. 7 San Felipe S. are all possible next-race options, with the Apr. 4 GI Santa Anita Derby a longer-range target.

Independence Hall paired a favored, open-lengths winning debut at Parx on the GI Pennsylvania Derby undercard with a gaudy 12 1/2-length dismantling of the GIII Nashua S., so there’s a buzz of anticipation to see what he comes up with for an encore in career start number three. We won’t have to wait long, because Wednesday he’ll headline the one-turn mile Jerome S. at Aqueduct as the heavy favorite against a weak-on-paper crew. This $100,000 KEESEP Constitution colt (subsequently RNA’d for $200,000 at FTFMAR after breezing an eighth in :10 2/5) sizzled a 101 Beyer Speed Figure in his stakes coming-out party (at 9-1 odds, no less), making him the only juvenile to crack triple digits on the Beyer scale in 2019.

Tiz the Law closed as the second favorite behind “all other males” in Pool 1 of the Kentucky Derby Future Wager primarily because his horror-trip third in the Kentucky Jockey Club S. was fresh in the minds of bettors. Some handicappers will look at what happened to him in that race–locked, blocked and pocketed, with several momentum stoppages before bulling through too late–and come to the conclusion that this $110,000 SARAUG Constitution bay would have been much the best under cleaner circumstances. Others will need more convincing. “Tiz” won sprinting in his Saratoga debut against fellow New York-breds. He next jumped up to open company to win the one-turn mile GI Champagne S., a race that also saw him creating and then overcoming his own trouble (repeatedly running up on heels while full of run). One concern is that in both of his stakes tries, Tiz has had his head cocked out to the grandstand and has required fairly busy handling to stay straight and on the correct lead.

This $175,000 KEENOV Dialed In colt broke his maiden at second asking by 5 1/4 lengths over seven furlongs, and his two-turn debut was a better-than-it-looks loss as the 3-5 fave in the Springboard Mile S. In that Remington race, Answer In settled in fifth, committed to an inside path 3 1/2 furlongs out, had to tip four wide at the quarter pole, then got caught on the heels of a tiring leader. But he showed zero hesitation when jockey Javier Castellano gunned him down to the rail to try to dive through a narrow passage in deep stretch, losing only by a head.

There’s no getting around it: Storm the Court’s blinkers-on, wire-to-wire 45-1 shocker capped the most perplexing and confounding edition of the Breeders’ Cup Juvenile in its 35 runnings. Perhaps a silver lining for the colt’s Derby development will be that because so many people regard his performance as a fluke, this $60,000 OBSAPR Court Vision bay (bought for $5,000 as a FTKFEB yearling) won’t be saddled with the usual high-pressure expectations that come with winning that race. The Juvenile was beset by no-shows: The third-favorite on the morning line scratched three days before race, the second fave in the betting ran a dull sixth, and the odds-on choice stumbled out of the gate and finished dead last. But still, Storm the Court won the internal Juvenile pace battle and had enough left to prevail in a slugfest stretch drive. His connections are considering–but not limiting their options to–the winter Derby preps at Santa Anita.

South Bend started a perfect three-for-three in one-turn races, but he threw in a blah sixth as the humbled fave in the GII Kentucky Jockey Club S. That race was run over a sealed, sloppy track under the Churchill lights, and it was the first two-turn try for this $70,000 OBSMAR Algorithms bay (RNA’d for $47,000 at FKTJUL). But South Bend’s one-length win in the Oct. 27 Street Sense S. is quite a bit more encouraging. He stalked while covered up at the rail, lost several positions on the turn, got bottled up behind traffic, then tipped out to punch home with a nice run. The final time was only a hundredth of a second off McCracken’s stakes record set in 2016, and the third- and fourth-place finishers both won Grade II stakes in their next starts.

This Declaration of War $50,000 KEESEP pinhook who resold for $190,000 at OBSAPR has made a respectable turf-to-dirt transition after requiring four starts to break his maiden. The crowning achievement of his juvenile season was a three-quarter length win in the Kentucky Jockey Club S. over a sloppy/sealed surface. Silver Prospector rated comfortably in fifth for most of that trip before commencing a steady grind 3 1/2 furlongs out, but he did require assertive handling from jockey Ricardo Santana, Jr. to nail a three-way photo with an 87-1 runner-up and the trip-troubled Tiz the Law. The gray is stabled at Fair Grounds, with next-race plans yet to be disclosed.

On the Bubble: (in alphabetical order)
Chance It (Currency Swap): Has roughed up Florida sire stakes competition and looms as home-court fave in Saturday’s Mucho Macho Man S.

High Velocity (Quality Road): Didn’t give up without a fight against Thousand Words in the Los Al Futurity.

Shoplifted (Into Mischief): ‘TDN Rising Star’ is the only BC Juvenile participant so far to come back and win; took overland route home in Springboard Mile.