TB Makeover Wraps Up in Lexington 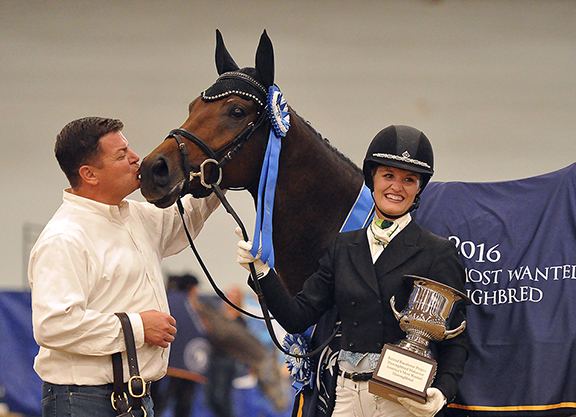 It was a rousing finish at the Thoroughbred Makeover as Lauren Turner and Fairway King took top honors in front of a packed crowd and collected the winner’s share of $10,000 (in addition to the $5,000 they earned by winning their division).

On Saturday the top three finishers in each division came back to compete in the semi-finals. The winners of each division were then invited back for the finals later that afternoon, in which the winner was determined by crowd applause. Turner and Fairway King wowed the crowd, performing their dressage test like seasoned pros before lapping the arena at a true racehorse pace.

Turner found Fairway by way of Facebook. Her go-to eventing horse’s career was going to be coming to a conclusion and she’d been hunting online for a new prospect. She stopped to see several horses on her way to a horse show one weekend last year, one of which was Fairway King. She passed on him the first time she saw him, but the owner called her several days later and offered her a price she couldn’t refuse.

Turner, who specializes in combined training out of River Birch Farm in Jasper, GA, said she just competed in her first CCI* three-day event (comparable to a graded stakes race) last month with her older horse.

“Completing my first one-star was a dream. That was my older horse’s last competition before retirement. I came into the Thoroughbred Makeover hoping to do well enough to sell [Fairway King], but the money we just won means that I get to keep him,” Turner said through tears of joy. “I think he will eventually be my main competition mount. The transformation he’s made from racehorse to show horse this year is just incredible.”

Turner said she enjoys working with Thoroughbreds and hopes to find a few racing clients that she can work with to retrain and sell their horses that aren’t going to make it on the racetrack.

“I want to be part of bridging the gap between racing and sport horses. I’m eager to work with trainers and owners to help them get their horses off the racetrack and put a solid foundation on them so they can have value in a different discipline,” said Turner.

The TCA Thoroughbred Ambassador Award, which was tallied based on which trainer earned the most votes in an online poll and came with a $2,500 check, was Michelle Craig, whose Youmightbearedneck competed bridle-less in show jumping after breaking his jaw in a multi-vehicle trailering accident earlier this year.