Taylor's Idea to Shake Up Sales, on TDN Podcast 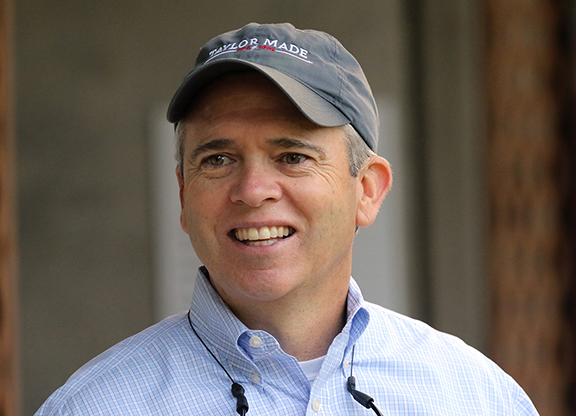 Appearing this week as the Green Group Guest of the Week on the TDN's Writers' Room podcast for January 8, Mark Taylor said that the industry needs to re-examine the role X-rays and the repository play in the sales process.

“I don't know if buyers would every endorse this, but take Keeneland September books 4, 5 and 6 and say there is not going to be a repository, it is absolutely buyer beware,”said Taylor, who is the vice president of marketing and public sales operations for Taylor Made. “It wouldn't work for $1 million horses but would it work for $50,000, $60,000 horses?”

Taylor understands the desire of buyers to have as much information as possible on potential purchases, but said that people have become too reliant on X-rays, which is causing a handful of unnecessary problems.

“From my perspective as someone who sells more yearlings than anyone else on the planet other than Keeneland and Fasig-Tipton, we watch what these horses do. We don't forget about them after we sell them,” Taylor said. “We track the ones who are running and the ones who aren't and what level they wind up at. The correlation between what the X-ray report says and how they run is very unpredictable. The vet reports have become the most important component of the sales process and that's a case of the tail wagging the dog. When you go the sales that paper better be clean or else you are completely up the creek.”

Taylor said ending the repository system for certain books at certain sales would help the smaller breeders financially. He also said that the extensive work done on horses before sales in hopes that they have clean X-rays is not good for the horse.

“You have to X-ray them in February of their yearling year,” he said. “They all have these little tiny chips, so you have to send them to the clinic, hang them upside down, put a tube down their throat, anasthetize them and then they have to stand in a stall for 45 days before the get back outside. We are doing all these really unnatural things to the horse to fix problems, that in my mind, were never going to bother the horse to begin with.

“There are no X-rays. There is no scoping. It's just buyer beware. You would bring in a bunch of well-raised horses and you advertise that they were raised organically, that we haven't done anything to them. A market like that would be so much more healthy because you'd save the breeder probably an extra $6,000, $7,000 and you'd be delivering a sound product.”

Taylor said that his idea would be a matter of returning to the past.

“This may sound crazy, but it could be the future and this thing could come back full circle to the days when my dad was raising horses,” he said. “They didn't go looking for problems. If the horse went lame they would get a diagnosis and try to fix it. We subject our horse to a ton of unnatural things trying to satisfy the vet reports. This would be a way to rectify some of these problems and draw breeders back in.”

The TDN Podcast is sponsored by West Point Thoroughbreds and the Green Group.