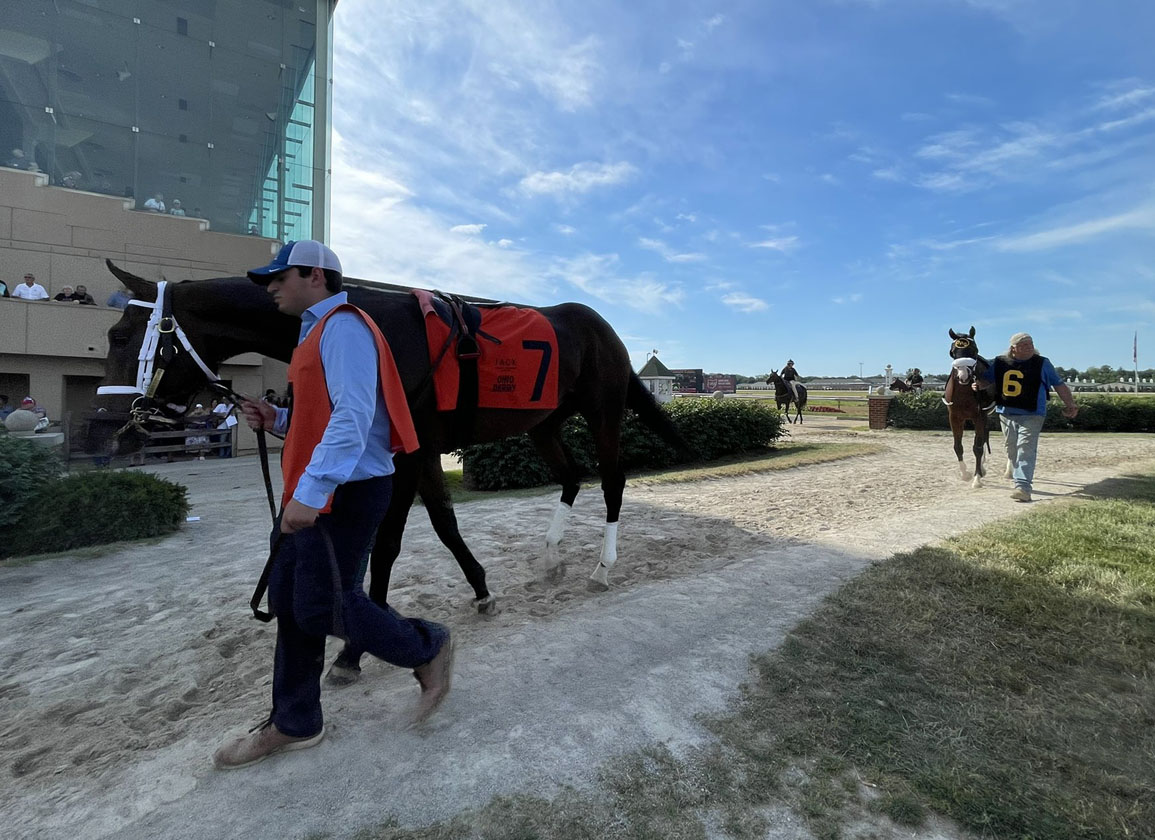 Saturday's GIII Ohio Derby–the lone graded event carded annually in the Buckeye State–attracted three runners who made their last start on the first Saturday in May beneath the Twin Spires in neighboring Kentucky. The trio, sent off the first, second and fourth wagering choices in the $500,000 test, would go on to combine for a trifecta that returned a chalky 14-1, as Peachtree Stable's 13-10 favorite Tawny Port (Pioneerof the Nile), a respectable seventh in the Derby, gathered up 3-2 second-elect White Abarrio (Race Day)–16th at Churchill–in the waning stages to take it by a length. Classic Causeway (Giant's Causeway), who outran odds of nearly 79-1 to be 11th in the Run for the Roses, boxed on gamely for third in his first run for the Ken McPeek barn.

Tawny Port broke without incident and was happy enough to sit back in the latter half of the field as longshot Pineapple Man (Gormley) and Classic Causeway led from White Abarrio, who appeared to be falling into yet another perfect trip. Classic Causeway, who displayed a bit of a rating gear, re-engaged and poked his head in front with about five furlongs to travel and galloped them along down the backstretch, as the chief protagonists bided their time a few lengths in arrears. White Abarrio was the first to come after the front-runner at the three-eighths marker and Tawny Port was also finding his best stride while forced to cover a bit of ground on the turn. White Abarrio poked his gray snout in front between rivals at the top of the lane, but Tawny Port was doing slightly the better work to the outside and grinded out the victory.

Two-for-two over the Turfway synthetic to start his career, Tawny Port was an even fifth behind Epicenter (Not This Time) in the GII Risen Star S. Feb. 19 before returning to the Florence oval to complete the exacta underneath Tiz the Bomb (Hit It a Bomb) in the Apr. 2 GIII Jeff Ruby Steaks. Backing up on just two weeks' rest in an attempt to pick up the necessary points for a Kentucky Derby bid, the dark bay scored a one-length success in the GIII Stonestreet Lexington S. at Keeneland. Drawn 18 of 20 in the Derby and sent off at 80.50-1–30 cents lower than the victorious Rich Strike (Keen Ice)–Tawny Port raced in the last third of the field for the opening three-quarters of a mile, came six wide for the drive and was beaten just under five lengths.

It has been a remarkable 2022 posthumously for Pioneerof the Nile, who passed away suddenly just over three years ago. Of course the sire of Triple Crown hero American Pharoah, Pioneerof the Nile has been represented by no fewer than nine black-type winners this season, including recent GI Acorn S. heroine Matareya, GII Summertime Oaks/GII Santa Ynez S. victress Under the Stars, GII TwinSpires Turf Sprint hero Arrest Me Red and Canoodling, winner of the GIII Megahertz S. and GIII Wilshire S. He is the sire of an additional 10 black-type performers this season alone.

Tawny Port is one of three winners from four to the races for his talented dam, a half-sister to Korean-based stakes winner and millionaire Clean Up Joy (Purge). Third dam Trust Greta bred eight winners from as many starters, including six-time GSW Surf Cat (Sir Cat) and GSW Rosie O'Greta (Fight Over). Livi Makenzie is the dam of a yearling filly by Always Dreaming from the same Empire Maker sire line as Tawny Port and foaled a colt by Global Campaign this past Apr. 25.