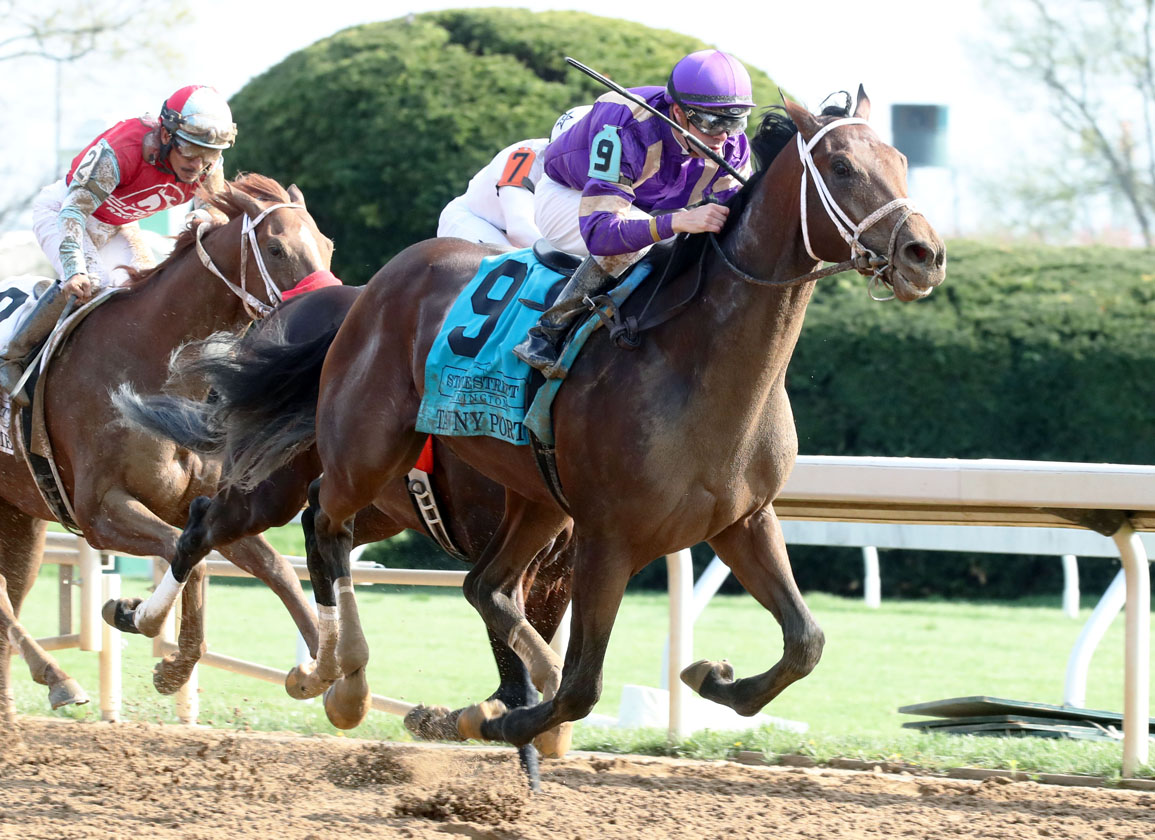 The 5-1 shot found a good spot in an outside fifth rounding the clubhouse turn. Traveling nicely while three wide heading into the far turn, he rolled up on the outside of the top two in the stretch and powered down the center to win going away by a length over the pacesetting Major General (Constitution). The latter, winner of last year's GIII Iroquois S., was adding blinkers following a dismal 10th in the GII Tampa Bay Derby Mar. 12.

Favored In Due Time (Not This Time), runner-up in the GII Fasig-Tipton Fountain of Youth S. Mar. 5, raced further back than expected and was along for third.

A winner of his first two tries going a mile over the Turfway synthetic Dec. 4 and Jan. 7, Tawny Port was a respectable fifth–beaten 7 3/4 lengths by likely Derby favorite Epicenter (Not This Time)–with a troubled trip in his first try on dirt in a live renewal of the GII Risen Star S. Feb. 19. He was a solid second, beaten 2 1/2 lengths, to Tiz the Bomb (Hit it a Bomb), in the Jeff Ruby Steaks last time.

“He responded today,” Cox said. “There was a little bit of a question mark with how well he would handle the dirt. He ran well at the Fair Grounds. Florent [Geroux] came back and had positive comments after that race, and I thought, 'Well, you know, right now, maybe you try to go in the Jeff Ruby Steaks.' So that's what we did, and he ran a real respectable race. Then we found ourselves nominated to this race and it worked out today.”

As for the Kentucky Derby, Cox added, “We'll see how he comes out of [today's race]. I'd like to congratulate [owners] John and Elizabeth Fort. This was John's idea, to come back in two weeks immediately after the Jeff Ruby. He said, 'We need to look at this race,' and I said, 'Well, I nominated him.' We watched him and he seemed to have a great energy level and his weight's great. He's a good-looking colt–really good-looking. [John Fort] picked him out.”

Tawny Port, the 21st graded winner and 44th black-type winner for Pioneerof the Nile, is a member of his sire's penultimate crop. The late WinStar sire's first crop consisted of five graded winners and it just got better from there, with Horse of the Year and Triple Crown winner American Pharoah a member of his second. Pioneerof the Nile, a MGISW and runner-up in the 2009 GI Kentucky Derby, died unexpectedly at age 13 in 2019.

Livi Makenzie was a $5,500 Keeneland September purchase for Mike Walker in 2010, was third in two graded events and won the 2013 Saylorville S. at Prairie Meadows, then was purchased by WinStar for $190,000 at the 2014 Keeneland November sale. She had four foals for WinStar, the last being Tawny Port–who sold for $430,000 to John P. Fort at Keeneland September–and was resold at the 2020 Keeneland November sale for $30,000 to St. Simon Place and Scott Stephens while in foal to Always Dreaming. That Always Dreaming foal is now a yearling filly and the mare was bred back to WinStar stallion Global Campaign for 2022.

Livi Makenzie is by champion Macho Uno, who now has 20 stakes winners out of his daughters. His 2021 Soaring Free S. winner First Empire (Classic Empire) is by a son of Pioneerof the Nile, while Pioneerof the Nile's MGSW and young sire Cairo Prince is out of a mare by Holy Bull, Macho Uno's sire.