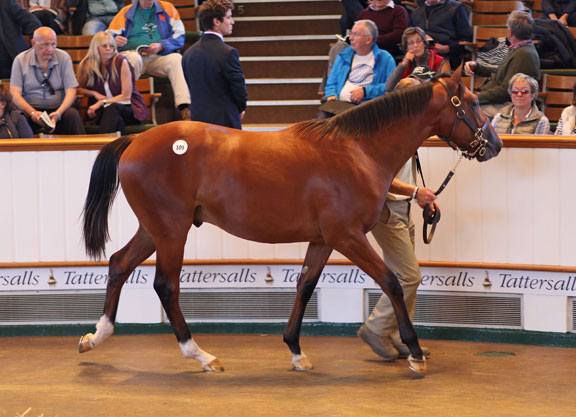 Mogul selling for 3.4-million gns at Book 1 in 2018. His full-sister will be offered this year | Tattersalls

A daughter of Newsells Park Stud's star producer Shastye (Ire) (Danehill) is among the 19 yearlings by Galileo (Ire) set to be offered at Book 1 of the Tattersalls October Yearling Sale from Oct. 6 to 8, for which the catalogue was unveiled on Wednesday. The bay filly (lot 436)-a full-sister to dual Group 1 winner Japan (GB) and group winners Mogul (GB) and Sir Isaac Newton (GB) and a half to G2 Middleton S. victress Secret Gesture (GB) and Australian listed winner Maurus (GB)-is the first filly out of Shastye to be offered as a yearling since 2016, when another daughter of Galileo fetched 1.35-million gns.

Other offerings by the perennial champion sire set for the sale include a full-sister to dual Classic winner Capri (Ire) (lot 122); a half-brother to dual Group 1-winning juvenile and promising young sire Shalaa (Ire) (lot 178); a colt out of Classic winner Sky Lantern (Ire) (Red Clubs {Ire}) (lot 444) and a filly out of stakes producer Wannabe Better (Ire) (Duke of Marmalade {Ire}) (lot 520), whose fillies the last two years have made 1.2-million gns and 500,000gns. Young stakes-winning mares with their first foals by Galileo include G3 Prix Imprudence winner and multiple Group 1-placed sprinter/miler Spectre (Fr), who has a colt (lot 454); multiple American graded stakes winner Prize Exhibit (GB), who has a filly (lot 374); and Australian Group 3 winner Dawn Wall (Aus), who also has a filly (lot 117).

Dubawi (Ire) has provided the sale-topping yearlings here the last two years and on paper he has every chance to maintain that reign. His 20 catalogued include a colt out of champion and King George and Arc winner Danedream (Ger) (Lomitas {GB}) (lot 112); a colt out of the Classic-placed Jacqueline Quest (Ire) who is a full-brother to this year's Royal Ascot winner Onassis (Ire) and a half to GI Breeders' Cup Juvenile Turf victor Line Of Duty (Ire) (Galileo {Ire}) (lot 229); a half-brother to G1 Investec Oaks victress Qualify (Ire) (Fastnet Rock {Aus}) (lot 356); a filly out of Group 1 winner and young stakes producer Seal Of Approval (GB) (lot 422); a half-sister to G1 Deutsches Derby winners Windstoss (Ger) (Shirocco {Ger}) and Weltstar (Ger) (Soldier Hollow {GB}) (lot 524) and the first foal, a colt, out of G1 Moyglare Stud S. winner Intricately (Ire) (lot 225).

Frankel's Banstead Manor studmate Kingman (GB) is coming off a stellar weekend in Europe and the U.S. and his 21 on offer include a half-brother to G1 2000 Guineas and G1 St James's Palace S. winner Galileo Gold (GB) (Paco Boy {Ire}) (lot 174) and a plethora of others out of young, stakes-winning mares.

“Graduates of Book 1 of the October Yearling Sale have enjoyed another stellar year with the likes of this year's dual Group 1 winner Palace Pier and outstanding global stars Newspaperofrecord and Russian Camelot flying the flag throughout the world,” said Tattersalls Chairman Edmond Mahony. “The international achievements of Book 1 purchases at the highest level have yet again demonstrated the uniquely global appeal of Europe's premier yearling sale and this year's catalogue is yet another in a long sequence of truly exceptional Book 1 catalogues. We have an extraordinary number of yearlings by the very best of an outstanding cast of European sires and, crucially for buyers at every level of Book 1, all 547 Book 1 yearlings can reward owners with the lucrative prize money offered through the £20,000 Tattersalls October Book 1 Bonus scheme. While the prize money for the hugely popular Book 1 Bonus Scheme has been slightly reduced in these uncertain times, it still remains uniquely rewarding and a significant number of the fillies in October Book 1 will also be eligible for the recently introduced Great British Bonus scheme.”