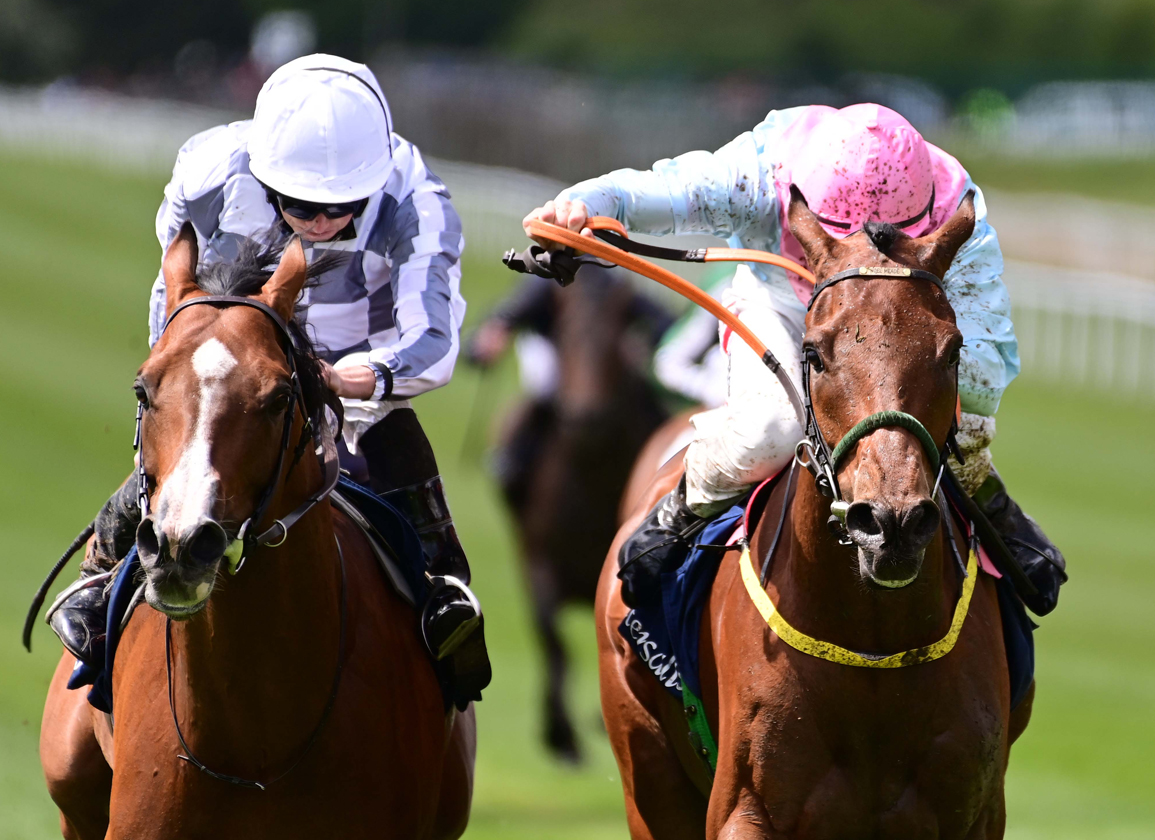 Beaten three times by Broome (Ire) (Australia {GB}) already this term, Tom Hendron and Finbar Cahill's Helvic Dream (Ire) (Power {GB}) had been inching closer each time and chose the big occasion to turn it around as he denied that Ballydoyle rival in a thriller for the G1 Tattersalls Gold Cup on Sunday. Benefitting from the heavily rain-eased going at The Curragh, the 4-year-old who emanates from the Noel Meade stable better known for its national hunt runners travelled smoothly on the inside in mid-division throughout the early stages. Filling the eye with Colin Keane motionless turning for home, the 8-1 shot had dead aim on the 10-11 favourite who had been committed by Ryan Moore approaching two out. Eventually asked to go and win his race, the gelding responded generously to overhaul Broome close home and prevail in a bobber by a short head, with a length back to the G3 Queen Elizabeth S. and Neom Turf Cup winner True Self (Ire) (Oscar {Ire}) in third. “I've won plenty of group 1s over jumps and had a number of horses placed in Guineas and a fourth in the Epsom Derby, so this feels just fantastic,” Meade said. “I was afraid to even dream about it. It means a lot and I can die happy now! It's a shame nobody is here, because you'd want to be going to the champagne bar over there!”

Having beaten the future luminary Champers Elysees (Ire) (Elzaam {Aus}) by 4 3/4 lengths in a heavy-ground Roscommon median auction race that has subsequently taken on a different dimension in September 2019, Helvic Dream was tried over too far before narrowly missing out on a first black-type win when third in a blanket to the Listed Vincent O'Brien Ruby S. over a mile at Killarney in August. Third in the valuable “Northfields” H. over 10 furlongs here on Irish Champions weekend in September, he bounced out of that to beat the useful Up Helly Aa (Ire) (Galileo {Ire}) by 7 1/2 lengths in the G3 International S. again over 10 furlongs on soft at this venue in October. Only eighth when the 5-4 favourite for the Listed Trigo S. at Leopardstown later that month, he was again flat on his return when a distant eighth behind Broome in the Listed Devoy S. at Naas Mar. 28. Narrowing that to 3 1/2 lengths next time when fourth in this track's G3 Alleged S. Apr. 17, he was just two lengths in arrears when second in the May 3 G2 Mooresbridge S. here last time.

Colin Keane delivered a masterclass in waiting ride tactics and said, “He relishes that soft ground and although I wasn't too sure we'd beat Broome, I did think he'd get a little bit closer. I thought he'd run well at Naas [in the Devoy], but he really disappointed us for whatever reason and the last day I got to Ryan [Moore] and he took off again. I wanted to have one crack at him and ideally, I should have waited another couple of strides again today. He's not short of pace and when he has those conditions I'd have no fear coming back in trip.”

Meade has no immediate plans for Helvic Dream. “He's improving all the time and Gillian O'Brien needs special mention here, as she treated him with a Chinese system which releases all the muscles and lets them loosen up. Two days after she'd done him, he was absolutely dancing down the yard. He could realistically be a horse for the [G1] Champion Stakes at Ascot, as you often get slow ground there which suits him. We'll have to think about a mile as well.” Aidan O'Brien said of Broome, “We were delighted and we're going up in trip with him now, for either the [June 4 G1] Coronation Cup [at Epsom] or the [June 19 G2] Hardwicke [at Royal Ascot].”