Pizza Bianca Gets Clement Off the Schneid 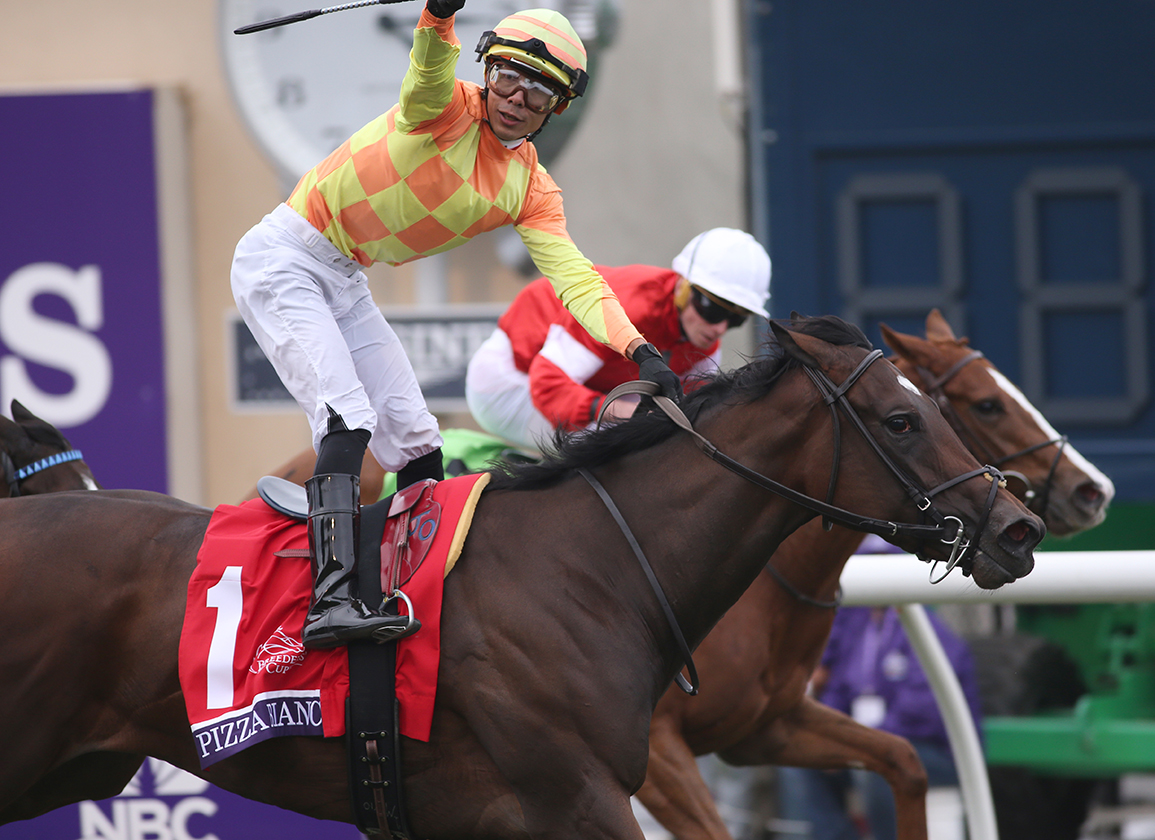 In the 1997 Breeders' Cup not far away at old Hollywood Park, trainer Christophe Clement made a favorable impression with his first-ever starter at the championships, sending out Allen Paulson's Flag Down (Deputy Minister) to a sound third-place effort behind Chief Bearhart (Chief's Crown) in the GI Breeders' Cup Turf. Thirty-nine starters had represented the stable in the 22 years since, each walked back to the barn a defeated animal.

You couldn't have faulted the Frenchman if he'd begun to feel a bit like the late Bobby Frankel, who saddled 36 starters in the Breeders' Cup before Squirtle Squirt (Marquetry) snapped his own dubious streak in 2001. But for trainers as capable as Christophe Clement, skids like this are bound to end sooner and not later, and so it was Friday afternoon when Pizza Bianca (Fastnet Rock {Aus}), a homebred for celebrity chef and Breeders' Cup ambassador Bobby Flay, slalomed home down the Del Mar lane to give the owner a second win in the GI Breeders' Cup Juvenile Fillies Turf, joining 2010 victress More Than Real (More Than Ready). Ryan Moore worked out a good trip from an awkward draw aboard French raider Malavath (Ire) (Mehmas {Ire}), whose rails run through the final furlong fell just short, while 'TDN Rising Star' Haughty (Empire Maker), who just snuck into the race, finished a promising third.

Pizza Bianca was the recipient of a very quiet Joel Rosario ride at just over 5-1 on Saratoga debut July 22, and came with a wide sweep off no pace whatsoever to outfinish odds-on Expand the Map (Ire) (Dark Angel {Ire}) by three-parts of a length. Tested for class in the GI Natalma S. at Woodbine Sept. 19, the homebred was more forwardly placed while clipping the hedge  for the opening half-mile, traveled nicely into the race nearing the straight and was short of room a furlong and a half out before boxing on gamely for second to Godolphin's Wild Beauty (GB) (Frankel {GB}), who'd have likely gone favored for Friday's race had she made the trans-Atlantic journey.

With Rosario opting for the undefeated Koala Princess (More Than Ready)–somewhat surprisingly sent off the betting favorite at 9-2–Jose Ortiz inherited the ride on Pizza Bianca, and the duo was off to an uneventful beginning from gate one. Allowed to drift back through the field, the dark bay raced with about three behind early as the positively ridden G1 Fillies' Mile third Cachet (Ire) (Aclaim {Ire}) set a moderate pace in advance of Turnerloose (Nyquist), with Mise En Scene (Ire) (Siyouni {Fr}) posted three wide for Oisin Murphy. With only GII JP Morgan Chase Jessamine S. upsetter California Angel (California Chrome) in her rear-view passing the half-mile pole, Pizza Bianca was outfooted into the turn by the latter, relegating her to last with three furlongs to race, but she nevertheless traveled strongly, appearing only to need somewhere to run when push came to shove.

Sent through an opening one off the fence between the rail-skimming Malavath and Consumer Spending (More Than Ready) as they neared the eighth pole, Pizza Bianca hit another gear to whoosh past a stubborn front-running Cachet and Hello You (Ire) (Invincible Spirit {Ire}) with time ticking away and flashed under the wire first.

“Very nice. Great win,” said Clement. “I'm delighted. I was surprised [agent] Ron Anderson and Rosario didn't ride the filly because we always thought that she a nice one and she proved us right today. I'm absolutely thrilled with the confidence showed in us. It's nice.”

On behalf of Flay, renowned bloodstock agent James Delahooke went to 1.25 million guineas ($2,122,050) for White Hot at the 2014 Tattersalls October Yearling Sale. The fifth-priciest offering in Book 1, White Hot was, at the time, a half-sister to 2011 G1 Investec Derby hero Pour Moi (Ire) and to MGSW & MG1SP Gagnoa (Ire) (Sadler's Wells). Flay entered White Hot carrying to Fastnet Rock (Ire) in the 2017 Tattersalls December Mares sale, but elected to withdraw her and that decision had proved fruitful, even prior to Friday's event.

Gagnoa's foal of 2017, the filly Etoile (War Front), took out the G3 Juvenile Fillies Sprint at Naas in 2019, while the current 2-year-old colt out of Gagnoa, Ancient Rome (War Front), has done his part to flatter the family with a victory in this year's G3 Prix des Chenes and runner-up efforts in the G1 Prix Jean-Luc Lagardere and G1 Criterium International this season. White Hot's full-brother Dawn Patrol (Ire) was the winner of the G3 Loughbrown S. and was third in the G1 Irish Derby in 2020. This is also the female family of G1 Epsom Derby hero Lammtarra, Hector Protector and Bosra Sham, et al.

Pizza Bianca is the first Breeders' Cup winner for the exceptional dual-hemisphere stallion Fastnet Rock (Aus) (Danehill) and is his seventh championship starter from his Northern Hemisphere-foaled crops. Pizza Bianca is the 42nd top-level winner for her sire, joining GI Man O'War S. heroine Zhukova (Ire), who is also out of a Galileo mare. She is also the stallion's 182nd worldwide black-type winner and 114th graded/group winner. Pizza Bianca is a mind-boggling 227th SW, 123rd GSW and 37th G1/GISW out of a daughter of the late Galileo. Cover Song, a daughter of Misty For Me (Ire) (Galileo {Ire}), won the 2016 GIII Autumn Miss S. for Spendthrift Farm and was purchased by Flay (James Delahooke, agent), for $1.6 million at FTKNOV a short time later. He RNAd Cover Song, in foal to Dubawi (Ire), for $3.9 million at FTKNOV in 2018.

White Hot was barren to Quality Road for 2020, but foaled a colt by Uncle Mo this past Feb. 4 and was most recently bred to Not This Time.