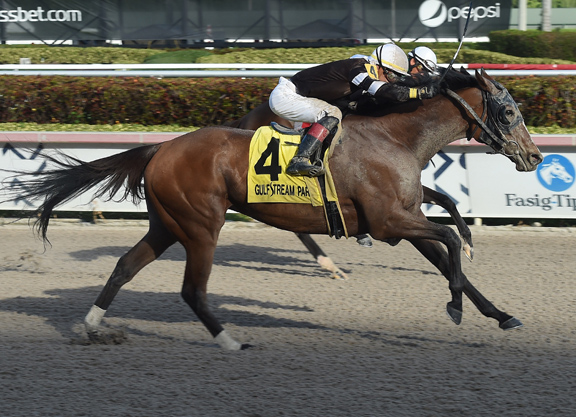 Pink Sands (Tapit) seems to save her best for Gulfstream Park, having posted two of her four previous victories over the surface. Making her fifth attempt at graded stakes competition in Saturday’s GIII Rampart S., the immaculately bred bay came with a stinging rally from last to earn a most valuable success.

The outposted Cookie Dough (Brethren) was well into stride from gate 10 and made her way down to the inside running rail, where she set a strong pace as Pink Sands dropped out to trail down the backstretch. Still out of the picture with three furlongs to race, Pink Sands raced in the slipstream of the rallying Cairenn (First Dude) while deep on the turn, was switched outside of that one traveling well into the stretch and kicked home sharply to grab the favorite in the final two jumps.

“She kind of went through her conditions here last year so we felt like when we brought her back down here that she does like the track and she’s had a little bit of an opportunity,” said winning trainer Shug McGaughey. “We had this in our mind…and it worked out well. She likes it here, it was a mile and [we were] trying to win a graded stakes with her.”

A course-and-distance allowance winner just shy of one year ago, Pink Sands was third to Come Dancing (Malibu Moon) in the GII Ruffian S. in May ahead of a breakthrough stakes tally in the June 22 Lady’s Secret S. at Monmouth. Well-beaten in the GIII Shuvee S. at Saratoga in July and in the GIII Locust Grove S. at Churchill in September, she was last seen finishing a never-nearer third in Aqueduct’s Pumpkin Pie S. Nov. 9.

The 78th career graded winner for Tapit, Pink Sands’s Grade I-winning dam was acquired by Larry and Karen Doyle’s KatieRich Farms for $1.5 million with the filly in utero at the 2014 Keeneland November Sale. KatieRich sold Pink Sands for $625,000 at the 2016 Fasig-Tipton Saratoga Sale. Her Smile, who earned her top-level success in the 2011 Prioress S., is a half-sister to the stakes-winning Moon River (Bluegrass Cat) as well as Doolittle (Polish Numbers), the dam of SW & GSP Tricks To Doo (Into Mischief). Pink Sands’s year-younger full-brother Timing Now was a $750,000 Keeneland September yearling purchase and was sent to Japan, where he has recorded two wins from four starts this season. The dam of a weanling colt by Candy Ride (Arg), Her Smile was most recently bred to Arrogate.