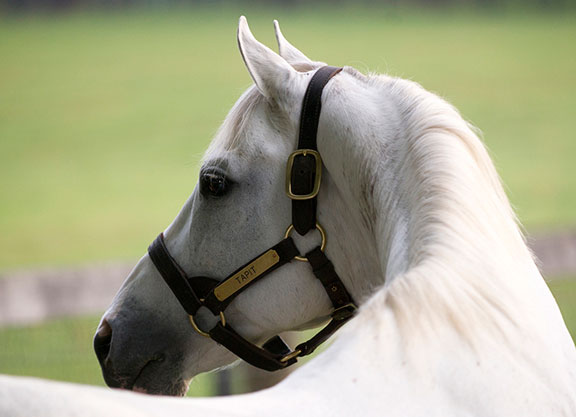 Though this is no comment of how much it cost to produce or acquire them, this week we publish lists of the leading sires of 2017 ABC Runners at the midyear point. As mentioned, it's important to realize that Midyear earnings thresholds are only around 65% of the year-end earnings thresholds, so it is possible–even likely–that some horses which are A Runners at Midyear will not have any more earnings, so could slip to B or even in a few cases C Runners. But, having said that, they can only win what's available to them, and a big majority of A Runners, or C Runners now will be A Runners or C Runners by the end of the year as well.

The leading sire of Midyear 2017 ABC Runners so far this year is none other than Gainesway's three-time Leading North American Sire Tapit, with 42 ABC Runners in 2017.

Eleven North American or European sires have 30 or more Midyear ABC Runners, which means we're seeing their names a lot in the results sheets. Tapit, for example, has 18 C Runners this year; goodness knows what it cost to produce them, but at least if they're not going to be good horses, they're at least earning their training fees.

Galileo, as noted, is the leading NA/EU sire of Midyear A Runners, with 26. Europe's number two sire, Dubawi, is a clear second on this list, with 20, with Tapit and Scat Daddy tied for third, each with 15 Midyear A Runners in 2017. Kitten's Joy, Candy Ride, and Sea The Stars have 13 each; Fastnet Rock, NH version, has 12; and American sires Uncle Mo, War Front, and Quality Road have 11 each.

Uncle Mo, of course, sets the standard for F2013 sires (first 4-year-olds 2017), with 30 ABC Runners, of which 11 are A Runners. Girolamo, a good sprinter-miler for Godolphin, stood his first two seasons in New York, then moved down to Kentucky, where his third crop are Kentucky-bred 2-year-olds of 2017. No doubt that New York-bred money helps his cause, but he's done well to tie with Twirling Candy for second among F2013 sires, with 14 ABC Runners this year, and he actually leads Twirling Candy in 2014 A Runners, six to five. In this crop of sires, we can just refer to Uncle Mo as “perennial number one” and Twirling Candy as “perennial number two”, so any category in which either or both are usurped, it's worth noting. Two sires exported from Spendthrift are tied with 13 ABC Runners each, but note that Wilburn (Okalahoma) has just one A Runner this year and a consequent six-month class rating of 1.38, while Archarcharch (Korea) has no 2017 A Runners and a class rating of 1.23. Florida's First Dude and former Airdrie sire Haynesfield have 11 ABC Runners each, though First Dude is third by number of 2017 A Runners, with four. Another Florida sire, Adios Charlie, has 10 ABC Runners in 2017, while the leading European F2013 sire is Zoffany, with nine ABC Runners, of which three are A Runners.

Among F2014 sires, Frankel is the new Uncle Mo, European version of course, but he towers over his contemporaries. His first crop now includes 10 GSW, about 8.8% of foals, which puts him in roughly the Galileo class by that metric–and that doesn't even include Cracksman, who has been second in two Derbies. In terms of the data we're looking at today, Frankel is the leading NA-EU F2014 sire with 17 Midyear 2017 ABC Runners, of which eight are A Runners. Stay Thirsty (16) surprisingly runs him close by ABC Runners, but on closer examination 47% of Frankel's ABC Runners are A Runners, whereas it's 12.5% for Stay Thirsty; and 62.5% of Stay Thirsty's ABC's are C Runners, versus 35% for Frankel. Consequently Frankel returns a six-month class index of 2.58, whereas Stay Thirsty's is 1.63. Shackleford had 11 ABC Runners (he's subsequently had the impressive winner of the GIII Schuylerville S. on opening day at Saratoga). Gemologist has 10 ABC's, though eight of them are C Runners. Nathaniel, The Factor, and the Australian-bred sprinter Foxwedge have nine each; Dialed In, Algorithms, and the English sire Harbour Watch (unbeaten 2-year-old by Acclamation) have eight each. Union Rags, Maclean's Music, Excelebration, and Hansen (only US crop) each has seven, but they are quite a notable bunch; Union Rags is second to Frankel with five Midyear 2017 A Runners, while Maclean's Music is one of four sires, including Shackleford, Nathaniel, and Dialed In, with four A Runners, and one of Excelebration's is the top 3-year-old, Barney Roy.

Besides Tapit's 42 ABC Runners and Galileo's 26 A Runners, one of the most remarkable statistics we discovered has to do with the number of 3-year-old ABC Runners so far this year. We've written a lot about how Into Mischief has got to be a top-class sire, because his first big crop, which were 2-year-olds last year, made him Leading North American Sire of 2-Year-Olds both by earnings and by number of winners (36). Now we see more evidence of it: he is still the leading North American sire by 2014 foal crop progeny earnings (click here), as well as by number of winners (92!), and he even leads Tapit by number of Black-Type Horses from the 2014 crop, 20 to 19. This is reflected in the Table which shows the number of 3-year-old ABC Runners this year: Into Mischief 28, Tapit and Galileo 20 each, Frankel 17. That is some company he is keeping.

The final table we want to look at reflects this performance by Into Mischief; this is the average age of sires' ABC Runners in the last six months. There were very few 2-year-old ABC performances by July 5–it's just too early–so the average ages will be higher than if we did the same calculation, say, at year's end. So, with the circumstances to do with his foal crop numbers which we've described, Into Mischief (3.16) has by far the lowest average age of ABC Runner. Galileo (3.43) has a lower average age than even Kodiac (3.52), though Kodiac is such a good 2-year-old sire the average age of his ABC Runners will surely fall significantly by the end of the year. Hard Spun (3.63), Scat Daddy (3.65), and Dark Angel (3.66) come next, though again it should be noted we only considered the 31 North American and European sires which have 5-year-olds and up this year and 20 or more ABC Runners in this category.