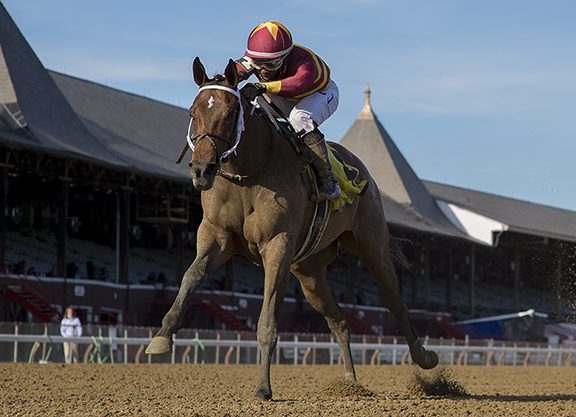 ‘TDN Rising Star‘ Thoughtfully (Tapit) continued a red-hot run with juveniles for trainer Steve Asmussen as she powered away a convincing winner of the GII Adirondack S. Wednesday at the Spa. Off since airing by 8 3/4 lengths at odds-on first out at Churchill June 11, the $950,000 Fasig-Tipton Saratoga purchase prepped for this by firing a five-furlong bullet in 1:00.91 over the strip Aug. 3 in company with unraced colt Calibrate (Distorted Humor) (XBTV Video).

Pounded down to 4-5 from a 2-1 morning line quote, the dark bay tucked in just behind Ava’s Grace (Laoban) and Make Mischief (Into Mischief) through splits of :22.33 and :46.12. Shuffled back to last of the five under a still motionless Ricardo Santana, Jr. at the top of the stretch, she tipped out for clear sailing and quickly inhaled her competition before bounding away to a dominant five-length tally in 1:17.20. Make Mischief bested Ava’s Grace for second.

“She’s a super nice, classy filly,” Santana said. “Today, going 6 1/2 [furlongs], I thought to take my time with her. It’s her second time out, and we wanted to teach her something. She responded really well. She has a lot of class.”

Asmussen’s go-to rider added, “She’s so special. When you work horses like her in the morning, you know what you have the in race. I was really happy and comfortable with where she was. This was the first time behind horses; last time, she was in the clear. Steve did a great job with her and [assistant] Scott Blasi and everyone did well with her. We’re really happy with her.”

Dam Thoughtfully hails from a strong Phipps family and is out of local GISW Furlough (Easy Goer), making her a full to GSW Happy Hunting. MGSW dam Blitey (Riva Ridge) produced MGISW sprinter Dancing Spree (Nijinsky II) and GISW Fantastic Find (Mr. Prospector), who in turn was responsible for MGISW Finder’s Fee (Storm Cat). Pension failed to produce a foal when bred back to Tapit for 2019, but foaled a full-brother to Thoughtfully Feb. 9 before revisiting the Gainesway super sire yet again.