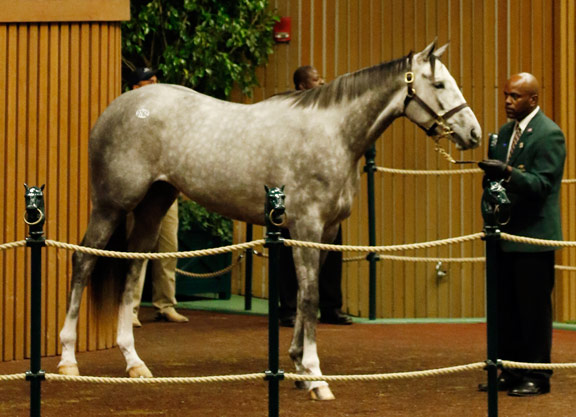 8th-CD, $54,440, Msw, 11-29, 2yo, f, 7 1/2f, 1:32.11, wf.
+ROYAL OBSESSION, f, 2, by Tapit
1st Dam: Rote, by Tiznow
2nd Dam: Song to Remember, by Storm Cat
3rd Dam: Wedding Reception, by Round Table
Royal Obsession was acquired by Stonestreet Stables for $1.15 million as part of the Regis Farms dispersal at Keeneland November earlier this month and returned immediate dividends with a 1 1/4-length debut score on closing day at Churchill Downs Sunday. The gray posted a steady diet of five-furlong works in Louisville over the last two months and was bet down to 7-5 favoritism from her 5-1 morning line designation. Away a step slowly, the 2-year-old trailed the field in the early stages behind a quarter-mile in :23.18 and made a steady wide bid on the turn to reach contention turning for home. Left with the more experienced Speightstastic (Speightstown) to catch in the final quarter, she raced a bit greenly, but kicked it into high gear to reel that rival in and win going away. Royal Obsession previously sold to Merriebelle Stable for $550,000 as a weanling at Keeneland November before Regis Farms paid $1 million for her as a Fasig-Tipton Saratoga yearling. The winner’s dam, a half to GI Garden City S. heroine Magnificent Song (Unbridled’s Song), sold in foal to Distorted Humor to Sheikh Abdullah Almaddah’s Marbat, LLC for $260,000 at the 2011 Keeneland November sale. The mare produced the filly Jumby Bay (City Zip) last year and an unnamed weanling colt by Tapit this year. She was bred back to Distorted Humor. Jumby Bay sold for $140,000 at this year’s Keeneland September sale. Click here for Thoro-Stride video of Royal Obsession; click here for the TDN’s Keeneland November sales story. Click for the Equibase.com chart or the free Equineline.com catalogue-style pedigree. VIDEO, sponsored by Fasig-Tipton. Lifetime Record: 1-1-0-0, $33,000. O-Stonestreet Stables LLC; B-Marbat, LLC (KY); T-Steven M. Asmussen.