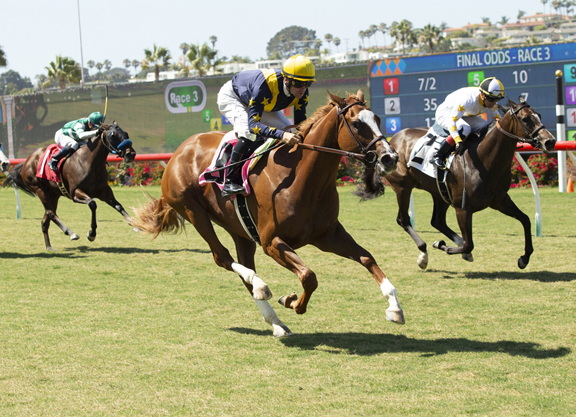 Newcomer Mind Out (Tapit) took some time to figure things out at Del Mar Wednesday, but when she did she uncorked a serious turn rally and flew home to get up and garner the ‘TDN Rising Star’ distinction. Having last breezed five panels in 1:01 here Aug. 11 (click for XBTV video), the chestnut broke outwardly from her wide draw to sit in a far-back last early. The 8-5 favorite moved inside of a bearing-out foe heading for home before shifting out into the center of the track for the stretch run. She responded willingly when hot-handed Flavien Prat asked her in earnest in midstretch, and collared pacesetter Nu Pi Lambda (City Zip) to score by a deceptively tight 3/4 of a length. According to Trakus data, the winner covered her final quarter in :22.48. The $850,000 Fasig-Tipton Saratoga buy is a half-sister to Miss Mischief (Into Mischief), Ch. Female Sprinter & Older Mare-Can, GSW, $522,980 and to the dam of last year’s MGISP Rowayton (Into Mischief), who will contest Saturday’s GI H. Allen Jerkens S. Presented by Runhappy at Saratoga. Her dam, a half herself to Grade I-winning juvenile J P’s Gusto (Successful Appeal), produced a full-sister to Mind Out in 2019 and a full-sister to Miss Mischief this Apr. 30. She was bred back to Triple Crown winner Justify. This is also the female family of champion Proud Spell (Proud Citizen). Antony Beck’s Gainesway is also the co-owner of this past Sunday’s ‘Rising Star‘ earner Sharing (Speightstown).