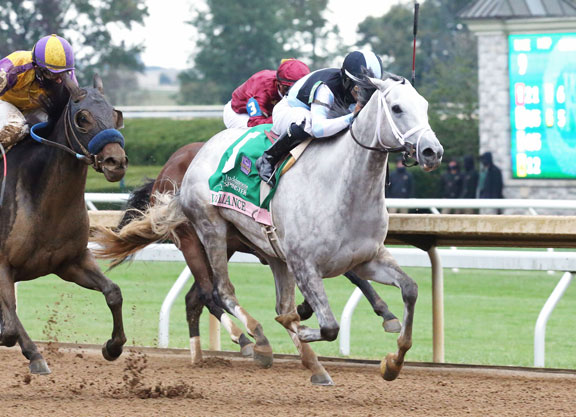 Valiance, previously a turf specialist who earned her first stakes win in a washed-off event last out, rallied from off the pace to upset the GI Juddmonte Spinster S. Sunday at Keeneland. The win sealed a berth in the GI Longines Breeders’ Cup Distaff for the gray and capped off a monster weekend at Keeneland for jockey Luis Saez.

Beginning her career with three straight turf triumphs last year, including a score in Monmouth’s Open Mind S., the $650,000 Fasig-Tipton Saratoga buy had to be shelved for over 10 months after that and suffered her first defeat when fourth in the off-the-turf Powder Break S. May 16 at Gulfstream. A non-factor sixth in the GII New York S., she got back on track against optional claiming company July 28 at Colonial and earned a career-high 93 Beyer when annexing the Eatontown S. in the Monmouth slop Aug. 27.

Off as the fourth choice in this sextet, Valiance was caught widest going into the clubhouse turn and maneuvered into a stalking third as favorite and GI Kentucky Oaks victress Shedaresthedevil dictated terms through a reasonable :23.62 quarter. Dropping back a spot as the pace quickened past a :46.97 half, she was given her cue approaching the three-eighths pole and sidled up alongside the frontrunner at the head of the stretch. Starting to wear that filly down passing the furlong grounds, she inched clear entering the final sixteenth only to be set upon by second choice Ollie’s Candy, but dug in to stave off that rival for the half-length victory.

“Just blown away. It’s been such an emotional year dealing with the craziest times that the world has seen. We’re just so honored to win a race like this with such a regally bred filly,” said Aron Wellman of winning co-owner Eclipse Thoroughbred Partners. “We’ve just been waiting and waiting and waiting to swing for the fences with her. We started her off last year as a turf filly. She trained well on the dirt all along, but the way things played out schedule-wise, option-wise, we kept her on the turf. She won a stakes last year on the turf as a 3-year-old, and we gave her a lot of time to come into her 4-year-old season.

“We never really ruled out the possibility that she was a good dirt horse. When she won the Eatontown in the slop, you know slop isn’t normal , but it gave us the confidence to take this monumental leap because she was a stakes winner on turf and then she was a stakes winner on dirt. We had nothing to lose by trying to go for the Grade I. We were going for it even though we knew [Midnight Bisou] was pointing for the Spinster and our hearts go out to the connections of that champion mare since she obviously couldn’t make the race. We felt that much more confident once she was out of the race that we would be live to make some noise.”

“It seemed like she had simply been training better on dirt than she ever did previously,” said trainer Todd Pletcher, who swept the two graded stakes on Sunday’s Keeneland card. “When she won her first three starts on the turf, it was logical to keep her on there. But when she didn’t fire her A race in the New York and when the Eatontown came off the turf, it was very impressive the way she did that that day. The margin doesn’t do justice to how easily she won that day. That’s when we started thinking about taking a shot in a big one. That was kind of the one thing missing on her resume was that graded stakes win. With a filly of her quality and pedigree, something like that was so valuable to her and we felt like in light of how well she was doing, it was worth taking a shot.”

One of 136 stakes winners for Tapit, Valiance becomes his 84th graded stakes winner and 27th Grade I scorer. She is the second foal to race out of Last Full Measure, who rallied from last to upset the GI Madison S. at 17-1 over the local synthetic track in 2013. Second dam Lazy Slusan was a two-time Grade I victress. Valiance has a 2-year-old Exaggerator half-brother named Harbor Bay and a yearling half-sister by Mastery who sold for $220,000 at last month’s Fasig-Tipton Kentucky Select Yearlings Sale. Last Full Measure, bought by China Horse Club for $1.5 million at Keeneland November in 2014, was bred to Constitution this season.