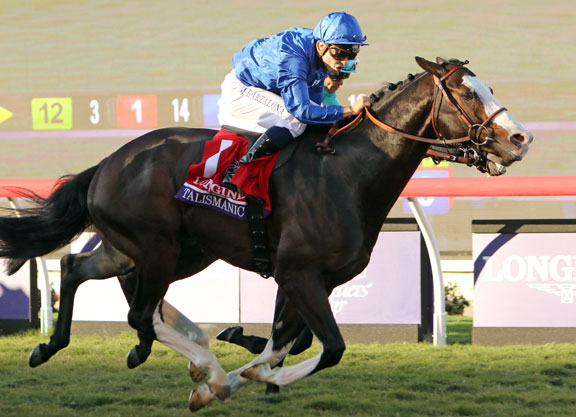 Trainer Andre Fabre had saddled two previous winners of the GI Longines Breeders' Cup Turf–In the Wings (GB) (Sadler's Wells), who won in the maroon-and-white of Sheikh Mohammed at Belmont Park in 1990; and Shirocco (Ger) (Monsun {Ger}) in the Big Apple in 2005. Fabre would have a soft spot for California as well. After all, he helped orchestrate the biggest upset in the 34-year history of the Breeders' Cup when sending out Arcangues at 133-1 in the 1993 GI Classic at Santa Anita and Godolphin homebred Talismanic (GB) (Medaglia d'Oro) made it five wins in all with a 14-1 upset in the $4-million event Saturday afternoon.

“The man is a living legend,” Godolphin's Joe Osborne said of Fabre. “He's got Breeders' Cups, Classics, Group 1s. He's just a master trainer and trained this horse perfectly. So, it's just a great result for us by our stallion, and bred by us and everything. So it just ticks all the boxes.”

Talismanic broke well enough from gate one and landed in about fifth position in the run to the first turn as Oscar Performance (Kitten's Joy), winner of this year's GI Belmont Derby and GI Secretariat S., was kicked straight into the lead and dropped down onto the rails from gate 13. Beach Patrol raced prominently as well, relegating Highland Reel–who led virtually every step of the way en route to the victory last year–was locked away in third, with Talismanic following him through from fifth. Oscar Performance led them through the lane and under the wire for the first time after a half in a reasonable :48.33 and there was very little change in the running order as the Turf field hit the midway point. Oscar Performance still held the call after a mile in 1:38 flat and took them around the final turn, but Beach Patrol was poised to his outside, while Highland Reel was feeling a left-handed stick from Ryan Moore with better than two furlongs to race. Highland Reel responded to the whip and was pulled out three wide to challenge outside Beach Patrol, but that maneuver allowed Mickael Barzalona to go on the attack atop Talismanic, who showed a superior turn of foot to dive through between Beach Patrol and Highland Reel three off the fence nearing the furlong grounds and stuck on gamely for the victory.

Barzalona splashed onto the international scene in 2011, winning the G1 Investec Derby aboard the Coolmore-owned, Fabre-trained Pour Moi (Ire) (Montjeu {Ire}) and nine months later, guided Sheikh Mohammed's Monterosso (GB) (Dubawi {Ire}) to a rousing success in the G1 Dubai World Cup. Talismanic was the first Breeders' Cup ride for the 26-year-old native of Avignon, France, and kicked off a late riding double for French jockeys.

“I can't believe it. I am thrilled to have won my first Breeders' Cup race,” he said. “I expected the horse to run well, but I'm not sure I thought I would win. Mr. Fabre is a great trainer.”

Sheikh Mohammed, alone and in partnership, has been represented by 10 Breeders' Cup winners, including fellow Breeders' Cup Turf victors Pebbles (GB), 1985, Daylami (Ire), 1999; and Fantastic Light, 2001 in addition to the aforementioned In the Wings.

A dual listed winner over 12 furlongs in 2016, Talismanic was 11th in the G1 Prix de l'Arc de Triomphe. First or second in his first four runs this season, the flashy dark bay with the baldy face was the easy winner of the G2 Prix Maurice de Nieuil at Saint-Cloud in July and was a latest third as the favorite in the G2 Prix Foy at Chantilly, with subsequent Arc runner-up Cloth of Stars (Ire) (Sea the Stars {Ire}) a neck ahead in second.

Talismanic was completing a huge day for Darley's Medaglia d'Oro, who was also responsible for GI Filly & Mare Sprint upsetter Bar of Gold and who has sired four Breeders' Cup winners in the last three years. Talismanic is a half-brother to Witnessed (GB) (Authorized {Ire}), dam of Godolphin's Stage Magic (Ire) (Dark Angel {Ire}), winner of the G3 Prix des Chenes at Chantilly in September. Third dam Capo di Monte is a half-sister to Wind In Her Hair (Ire) (Alzao), the dam of none other than superstar Japanese stallion Deep Impact (Jpn) (Sunday Silence). Magic Mission is the dam of the 3-year-old colt Edef Xam (Ire) (New Approach {Ire}) and was most recently bred to Muharrar {GB}). The mare's Invincible Spirit (Ire) colt of 2016 passed away last year.