Taking Stock: The Horse of the Year Debate 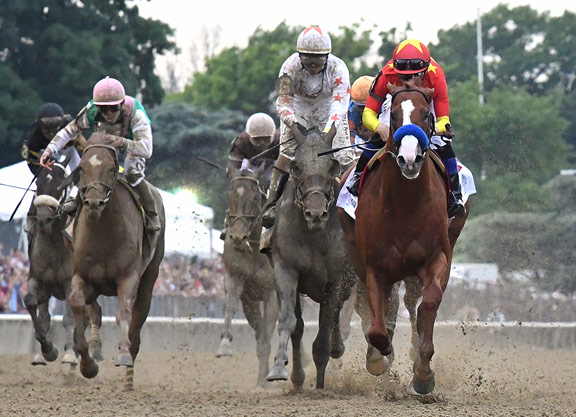 What a time to be alive!

I've seen it said on Twitter and elsewhere that the Triple Crown races are nothing more than a series of “restricted” races for 3-year-olds, and, therefore, not as important as the “unrestricted” Grade I races for older horses. To diminish the accomplishments of Triple Crown winner Justify (Scat Daddy) in this way is either ignorance or a line of historical revisionism used by some to make a case for Accelerate (Lookin At Lucky) as Horse of the Year.

Racing is a microcosm of society, and just as some longstanding institutions of the social order are under threat these days, perhaps it's not that surprising to see the Triple Crown, one of racing's greatest institutions, spoken of so cavalierly. We are living through a period where the significance of the past is being conveniently ignored for the construction of newer narratives within a historical void. But this conceit won't hold water in the long run because it is on precedence that historical significance is measured. And historical significance should be at the heart of the debate of Accelerate versus Justify for Horse of the Year.

In the modern era of the last 50 years or so, there have been five Triple Crown winners in the U.S.: Secretariat ('73), Seattle Slew ('77), Affirmed ('78), American Pharoah ('15), and Justify ('18). Each of these colts had to win the 10-furlong GI Kentucky Derby, the 9.5-furlong GI Preakness, and the 12-furlong GI Belmont S. within a period of five weeks, which is a debilitating task and an exceptional achievement, and it's why there have been so few to accomplish the feat. In fact, as the 37 years between Affirmed and American Pharoah dragged along, there was talk from many quarters about changing the format of the Classics, either by reducing race distances or extending time between them, as a method for manufacturing the possibility of another Triple Crown winner. That's how hopeless things seemed, and breeders specifically were blamed during this span for producing softer and speedier horses lacking toughness and the requisite stamina. But in the end, the institution stood as it had, despite repeated efforts for change, and American Pharoah and Justify arrived as examples of excellence that linked them by achievement to America's past Golden Age.

Some have forgotten this. Others, including Andy Beyer, who recently said that Accelerate should be Horse of the Year over Justify, have changed their minds. But what Beyer compellingly wrote in the Washington Post in '93 is still the case today: “The Triple Crown is exceptionally demanding and difficult–but that's what it's supposed to be. There are no tests in horse racing, and few in any sport, that are so reliable as a measurement of excellence. One might think that in a weak year a moderately talented animal might be able to get lucky and dominate his rivals over a five-week period. But this never happens. The four horses who have swept the series in the last 45 years–Citation, Secretariat, Seattle Slew, and Affirmed–ran among the very best of all time.”

The Classics are for 3-year-olds–as they are in Europe, from where they were modeled–and the best of each crop is aimed for them. They are the races that make reputations, garner the most prestige for owners and breeders, and have the greatest fan interest, particularly when a Triple Crown is on the line. And as Beyer wrote, to sweep all three has never been easy. There have been only 13 Triple Crown winners dating back almost 100 years. And every Triple Crown winner since the '70s, except for Justify–who was retired after the Belmont because of an injury–has also gone on to defeat older horses. More tellingly, however, each was voted Horse of the Year at three, because those voters at the time knew the enormity of their accomplishments.

Justify was undefeated and the winner of four Grade l races in six starts. He didn't race at two. The last horse to win the Kentucky Derby without a start at two was Apollo in 1882, which is quite something when you think about it. Justify's rise to Triple Crown winner, then, was as historic as it was meteoric and improbable, but the fairytale ended when a bothersome ankle forced his premature retirement.

Out of action for the second half of the year, Justify's brief campaign became fodder for the what-have-you-done-for-me-lately crowd, especially on Twitter. With a big syndication price around his neck and the notion that his record was being protected; a trainer, Bob Baffert, who's not popular on social media; an ownership group of multiple partnerships, including the ubiquitous Sol Kumin, that was ridiculed on social media; and the stigma of not having beaten older horses, Justify's popularity started to wane as the year wore on and Accelerate's wins accumulated.

Accelerate had an excellent year and won six of seven starts, including five Grade l races and the important year-end target of the last quarter-century, the Gl Breeders' Cup Classic. He became a natural “populist” opponent to Justify for Horse of the Year, a disruptor to the establishment.

I won't address the “social furor” surrounding Justify and his connections, but I can address the issue of the colt not defeating older horses with this: Neither did Seattle Slew or Affirmed as 3-year-olds.

Seattle Slew lost to J.O. Tobin, the English champion 2-year-old of '76, in his only start after the Triple Crown and never faced older horses at three, while Affirmed, who did, lost to Seattle Slew and Exceller the only two times he faced his seniors. That didn't stop either from being named Horse of the Year during their Triple Crown seasons, because of the weight of those three elusive wins.

In fact, the vote for Horse of the Year in '77 was close. Forego, an all-time great and the reigning three-time Horse of the Year, had won four of seven starts and was weighted at 136 pounds for the Grade I Marlboro Cup after winning the Grade I Woodward under 133 pounds to end a three-race losing streak. Unfortunately, the popular weight carrier's famously fragile ankles didn't hold up and he was forced to miss the Marlboro Cup and was put away for the year. Had he won that race, he'd have been the first to pass the $2 million earnings mark and would likely and deservedly been voted his fourth consecutive Horse of the Year title over a Triple Crown winner.

The next year, Exceller defeated both Seattle Slew and Affirmed in the Grade I Jockey Club Gold Cup to finish the season with a sparkling record of seven wins from 10 starts, including six Grade I races on turf and dirt, but he won no awards, with Affirmed voted Horse of the Year and Seattle Slew best older horse. That was a tough break for a thoroughly top-class horse.

In this context, Accelerate doesn't stack up next to such greats as Forego or Seattle Slew and maybe not even Exceller, and if those three couldn't turn the tables on Triple Crown winners, it beggars belief that Accelerate could topple Justify. But we're living through some strange times where norms have been discarded, and the ultimate decision on which horse is voted Horse of the Year will probably say more about us than him.