Taking Stock: The Cases of Navarro and Servis 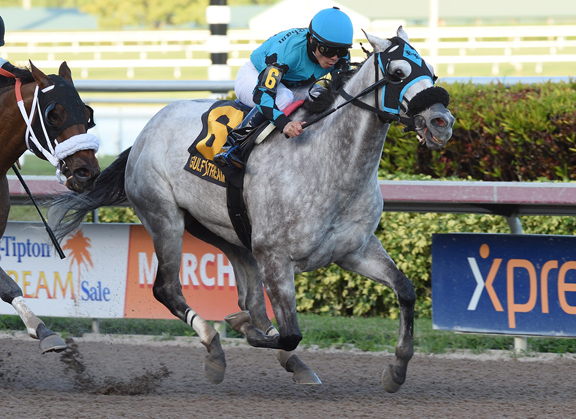 What an awful way to start the week. Sandwiched between a chaotic stock market and the spread of coronavirus, the racing industry got word Monday of a tawdry racehorse doping scandal that came packaged in four indictments against 27 defendants. These schemes were replete with instances of gutter-level language from wire taps that painted the treatment of some of these horses as nothing more than disposable money-making commodities.

The 27 individuals included some trainers and veterinarians. They were charged by the U.S. Attorney's Office of the Southern District of New York (SDNY) for the misbranding and adulterating of drugs, and the two biggest names in the roundup were well-known trainers Jorge Navarro and Jason Servis.

Railbirds have long suspected the duo of cheating for their high-win percentages and form-turnarounds of cheap horses, but both have also trained some high-profile runners in recent years. Navarro conditioned Grade l winner X Y Jet (Kantharos), who died unexpectedly earlier this year of what his trainer publicly stated was a “heart attack,” and Servis had last year's 3-year-old champion Maximum Security (New Year's Day) and Grade I winner World of Trouble (Kantharos), now at stud at Hill 'n' Dale alongside his sire. Coincidentally, New Year's Day (Street Cry {Ire}) also stood at Hill 'n' Dale prior to his sale to Brazil and then later to Japan.

All three racehorses–X Y Jet, Maximum Security, and World of Trouble–are mentioned in one of the four indictments issued by SDNY as having been “doped” by misbranded and adulterated drugs at one time or another, along with other unnamed runners trained by Navarro and Servis. Navarro appears in two indictments as a shameless and ruthless operator with no actual regard for the welfare of the horses under his care beyond their capacity to make a lot of money for him. He was charged with two counts of misbranding conspiracy (each count carries a maximum penalty of five years' imprisonment), and he's alleged to have brazenly given his horses a wide-ranging array of illegal and non-FDA-approved drugs that were illegally manufactured, transported, and sold across state lines. By far, he's the worst transgressor of the two in the indictments.

Servis was charged with one count of misbranding conspiracy. When Coolmore purchased 50% of Maximum Security a few months back, I wrote of Servis that his “gaudy win percentage has been fodder for innuendo.” It now appears that innuendo may be fact, if the SDNY allegations against him are proven true. In contrast to the long list of drugs linked to Navarro in two indictments, only two specific drugs are linked by name to Servis in the one indictment in which he appears. One is the FDA-approved Clenbuterol, a therapeutic prescription-based bronchodilator that's known under the trade name of Ventipulmin Syrup. Clenbuterol abuse was a topic that was addressed by trainer Mark Casse just last week in these pages.

The indictment alleges that Servis and his indicted assistant illegally administered Clenbuterol without a prescription, for the purpose of performance enhancement instead of therapeutic use. The other drug that Servis is accused of using, including on Maximum Security, is something called SGF-1000, which is not an FDA-approved medication and which I'll address later.

Because both trainers had been under electronic surveillance for a long time by FBI and other law-enforcement agencies involved in this far-ranging, multi-state, and multi-year investigation, the evidence against them appears to be strong for misbranding conspiracy–the only charges levied against them.

The Jockey Club (TJC) released a statement on Monday shortly after SDNY announced the charges, revealing that it had hired a private firm by the name of 5 Stones intelligence (5Si) in 2016 to investigate doping. According to TJC's release, “5 Stones' investigation produced indications of significant racehorse doping and active equine doping networks within the industry.”

5Si is a pretty serious outfit that has contractual work with the U.S. Department of Justice, and it describes itself on its website as “a network of former members of the DEA, FBI, Secret Service, CIA, ATF, Military Special Officers, and Detectives from the New York Police Department and Miami Police Agencies.”

An industry source who requested anonymity because he was not authorized to comment on the matter said that 5Si is still retained by TJC, which hired the firm in the fall of 2015, and said the firm has worked with the Meadowlands and three other top-level tracks in the investigation of doping rings.

“There were elements of cooperation within the industry with several high-level racetracks,” the source said, declining to name the other three entities involved. It's highly likely, based on information in the indictments, that at least one of those tracks was TSG's Gulfstream Park.

When 5Si started finding indications of widespread doping, it reported its findings to law enforcement agencies, the source said.

“It's gotta be shared with law enforcement immediately. It'd be a crime if it wasn't.”

Because of 5Si's bona fides with law enforcement, its findings were investigated, developed, and streamlined over the last few years by the FBI and other federal and state law enforcement agencies, resulting in the SDNY indictments that Manhattan U.S. Attorney Geoffrey S. Berman called in a press release as “the largest ever of its kind from the Department of Justice.”

Part of the investigations of Navarro and Servis included detailed electronic surveillance in 2019–the year X Y Jet won the G1 Dubai Golden Shaheen at Meydan and Maximum Security was first past the post in the Gl Kentucky Derby. The indictments list and describe some intercepted calls and text messages from Servis and Navarro that are highly incriminating, including a Feb. 18 text message from Servis to Navarro tipping him off to the whereabouts of a racing official in their barn area where alleged drugs were stored. Later the same day, Navarro then told someone else by phone that Servis had saved the day with his warning text, saying in part: “[The official] would've caught our asses f–ing pumping and pumping and fuming every f–ing horse [that] runs today.”

Navarro won three overnight stakes at Gulfstream on that day and finished second in two other races.

There's a lot more detail in the indictments of Navarro about drug administration, including specifics of Navarro himself brazenly administering named illegal drugs to X Y Jet in Dubai, including on race day. There's surprisingly little drug specificity related to Servis other than generic statements such as he “concealed the administration of PEDs,” except for specific notes on Clenbuterol use without a prescription and the aforementioned use of SGF-1000–which SDNY alleges that he covered up by “falsifying veterinary bills” and through “fake prescriptions.”

Most surprisingly, SDNY has no mention in the indictment of Servis about Maximum Security in Saudi Arabia, where the colt most recently won the $20-million Saudi Cup–the richest race in the world. You'd assume that SDNY would have included in its indictments any evidence of drug use from the Saudi race, as it did with X Y Jet's Dubai race, if it had incriminating evidence against Servis.

There's probably a reason for this. The dates in the indictment against Servis range from February to October of 2019. (For Navarro, they are from January 2017 to January 2020.) On Oct. 28, 2019, veterinarian Seth Fishman, one of Navarro's co-conspirators, was arrested and charged in Miami, and it's possible that this event sent everyone involved in these schemes scurrying underground.

Maximum Security won two races after October of 2019: the Gl Cigar Mile H. at Aqueduct Dec. 7, 2019, and the Saudi Cup on Feb. 29. Neither race falls within the range of dates where allegations against Servis were made in the SDNY indictment.

SGF-1000 is a drug that was originally manufactured in Australia in facilities approved by that country's regulatory agency, GMP/APVMA. You can read about it here.

A Kentucky-based company started to make a “counterfeit” version of the drug, according to the Australian company that sold the product, and this U.S.-produced product, which was sold widely on the internet, was compounded in facilities not approved by the FDA, according to the indictments. Therefore, as a non-FDA-approved drug, its use in racehorses was illegal, according to SDNY.

What exactly is SGF-1000? The Australian manufacturer lists its main ingredient as ovine placental extract.

Matt Hegarty of Daily Racing Form recently wrote this about SGF-1000: “SGF-1000 was analyzed by racing regulators in 2014 and found to contain no known performance-enhancing ingredients, according to Dr. Mary Scollay, the executive director of the Racing Medication and Testing Consortium, which is funded by the racing industry. However, Scollay cautioned that the substance could have had its formula changed in the ensuing years. She also reiterated that many internet pharmacies make unsubstantiated claims routinely for substances that are not known to have any efficacy.

“In the case of SGF-1000, the main ingredient was 'I think, sheep collagen,' Scollay recollected. That substance and others like it that are ingredients in similar products would not trigger a positive in drug tests because the substances do not have a known pharmacological effect and are therefore left off drug screenings.”

According to SDNY, the version of SGF-1000 that's been compounded in the U.S. is considered a PED, and the industry source who wished to remain anonymous said, “I'm sure the FBI labs would have analyzed it before bringing these allegations.”

Whether or not it's a PED will have no bearing on convictions, because SGF-1000, no matter how you look at it, appears clearly to be a misbranded and adulterated drug that's been manufactured at a facility not approved by the FDA, which governs the manufacture and distribution of drugs. Remember, the charges against Navarro and Servis are counts of misbranded conspiracy, and in this regard SDNY appears to have an airtight case against the two.

This isn't the ending. It's just the beginning–hopefully.