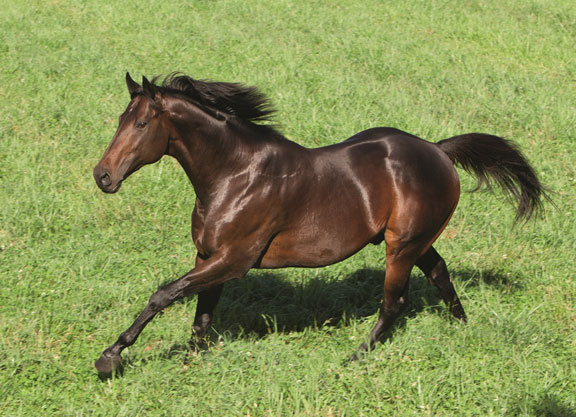 “If you had a nice mare, there's a couple of spots that mares haven't been named yet. We keep him at around 140 mares. He was very hard to manage the demand, especially last year at 75, and he's 60 now, but that's because of overall market conditions. It wasn't a reflection of cooling off on the track or anything to that end.”

Indeed, the stallion couldn't be hotter right now. Last Saturday, the Bob Baffert-trained Concert Tour, a debut TDN Rising Star for owner-breeders Gary and Mary West, won the Gll San Vicente S. at Santa Anita over seven furlongs in his second start to announce his arrival as a player in future Classics preps, and this Saturday Godolphin's undefeated 4-year-old Grade l winner Maxfield, four-for-four in a career that's been stopped several times by injury, will be heavily favored to win the Glll Mineshaft S. over a mile and a sixteenth at Fair Grounds, a race that trainer Brendan Walsh no doubt hopes will launch him into the elite races of the older-horse division.

At one time, after winning the Gl Breeders' Futurity S. at Keeneland at two, Maxfield was considered a leading 2020 Classics contender for Godolphin, but in a trying year that saw him make just two starts, he was able to only salvage wins in the Glll Matt Win S. at Churchill in May and the Tenacious S. at Fair Grounds in December, missing the glamour races of the division. However, as a consolation, Godolphin did manage to win a pair of Grade lll Derbys last year with another son of Street Sense who was bred like Maxfield. Trained by Brad Cox and also from a Bernardini mare like Maxfield, Shared Sense won the Indiana and Oklahoma Derbys.

If you saw TDN's list of leading sires of 3-year-olds in Wednesday's paper, you'll have noted that Street Sense leads all sires by black-type winners with three and that he's tied with Candy Ride (Arg) and Medaglia d'Oro with two graded winners through the first six weeks of the year. He's also second by progeny earnings to Into Mischief. He started the new year with Capo Kane's win in the Jerome S. over a mile at Aqueduct on Jan. 1, followed by two-for-two Shadwell homebred Zaajel's score in the seven-furlong Glll Forward Gal S. at Gulfstream on Jan. 30, which was a week before Concert Tour's San Vicente. If Maxfield wins on Saturday, he will give Street Sense a third consecutive weekend graded winner and his first in the older horse division.

“When you get a good Street Sense, you get a really good one,” Baffert emphasized, and he'd know. He trained McKinzie, who won the Gl Los Alamitos Cash Call Futurity at two, the Gl Pennsylvania Derby and Malibu S. at three, and the Gl Whitney at four, along with several other graded races, earning almost $3.5 million. He's standing his first year now at Gainesway for $30,000. Baffert thinks that Concert Tour, who earned a 94 Beyer Speed Figure in the San Vicente, will also get better as he matures and as the distances increase, and he's looking forward to stretching him out after two starts in sprint races.

“That's how Street Sense performed,” Fox said. “That's how his more high-caliber, signature horses have been. Colts and fillies going two turns on dirt. That's how he was, and that's what gets the market most excited about him.”

“He's flying on the track right now, but if you breed to him in 2021, you're going to be hitting the market perfectly because he's got three awesome books coming.”

Street Cred
From a Darley roster that features an array of proven stallions and promising young guns, from Medaglia d'Oro, Bernardini, and Hard Spun to Nyquist and Frosted, Street Sense must occupy a special place as one of two on the farm along with Street Boss that are sons of Sheikh Mohammed's pivotal sire Street Cry, who's commemorated with a statue on the ex-Jonabell property for being the first to establish the Darley imprimatur.

Though he died young at 16, Street Cry sired 131 black-type winners and has been influential around the world. His first N. American crop contained Street Sense, a champion 2-year-old and Kentucky Derby winner; Street Boss, a high-class specialist sprinter; and Zenyatta, a late-developing champion and icon. Add in another icon in Australia in Winx and a G1 Melbourne Cup winner in Shocking, and these five runners alone do the job of illustrating the versatility and aptitudinal scope of their sire over the span from sprints to Classic distances to two miles, on surfaces from dirt to all-weather to turf, with championship class at two and above, and Classic success at three.

That's quite a legacy to follow, but the Gl Breeders' Cup Juvenile/Kentucky Derby double marked Street Sense as unique, and the other horse that has won both races is Street Sense's barnmate Nyquist, who's started his stud career in great style. Darley has a chance to land another winner of the double with Godolphin's homebred champion 2-year-old Essential Quality (Tapit), who impressively won the BC Juvenile last year, but he'll have Darley-sired Derby aspirants like Concert Tour, Caddo River (Hard Spun), Risk Taking (Medaglia d'Oro), and The Great One (Nyquist) among others to potentially contend with in preps leading up to the big race in Louisville.

After his return, Street Sense had attained a level of status as the sire of five Grade l winners from his first five crops, but because each of his top-level winners to this point were fillies–Aubby K (2009), Wedding Toast (2010), Sweet Reason (2011), Callback (2012), and Street Fancy (2013)–he had to fight a perceived sex bias, along with a missing domestic crop, in the immediate years after Japan. His stud fee from 2014 to 2018 ranged from $35,000 to $45,000, but McKinzie's success changed perceptions, followed by the arrival of Maxfield as a 2-year-old in 2019. Street Sense had also sired four S. Hemisphere Group 1 winners during a few shuttle seasons to Australia early on, two of them males, and this further bolstered Darley's confidence that more top-level colts would follow. Fox said Darley continues to breed 12 to 15 mares a year to him and is particularly keen about what's to come in his next three crops with 76 black-type winners already in the bank.

Street Sense is now 17, an age when most successful horses have established a high floor and you know what you're going to get. But in his case, with the way the trajectory of his career has played out, he may yet have the type of high ceiling that's usually projected for promising horses like Nyquist at the beginning of their careers.