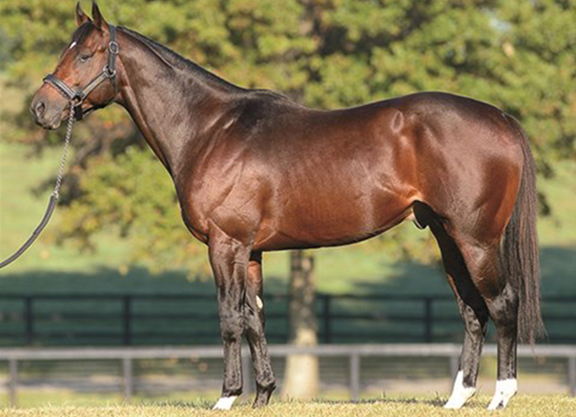 The unusual arc of New Year’s Day (Street Cry {Ire})’s stud career has given him new life. The sire of Gl Xpressbet Florida Derby winner Maximum Security, disqualified from an apparent victory in the Gl Kentucky Derby, but most recently the winner of the Gl TVG.com Haskell Invitational S. at Monmouth last weekend and one of the leading 3-year-olds of 2019, last stood for $5,000 at Hill ‘n’ Dale in 2018–his fifth season at stud. A $425,000 Keeneland September yearling purchase in 2012 by Ben Glass for Gary and Mary West [disclosure: clients of WTC, Inc.], New Year’s Day won two of three starts at two, including the Gl Breeders’ Cup Juvenile, earning $1,154,000. However, a chip in a hind sesamoid at the end of the year finished his career, and he went to stud at three, standing for $12,500.

Because the colt was a Grade l winner at two by a top stallion, an attractive individual (and a smoother and neater model than the typical Street Cry), and later, before the beginning of his third season, a half-brother to graded winner Mohaymen (Tapit), he had a lot to recommend him at the fee his first few years at stud. But reality is that after one season, the commercial marketplace isn’t kind to horses like New Year’s Day. Commercial breeders at every price point tend to flock to the newer horses each year, and horses at the lower end of the stud-fee spectrum are particularly prone to early dismissal. Each subsequent year at stud becomes that much more difficult for attracting mares, and if a horse doesn’t hit with his first crop, breeders will write him off ruthlessly.

The Wests had supported New Year’s Day heavily through his first several crops, but they sold him to a Brazilian stud late last year. I was in the Wests’ private room at Keeneland at the November sale when Glass told me he was expecting the Kentucky-based agent for the Brazilians to arrive at any minute that day to finalize the deal. The horse had been represented by his first crop of 3-year-olds and second crop of 2-year-olds in 2018 and had yet to sire a graded stakes winner, and Glass knew his future was bleak in Kentucky and a decision had been made to sell.

At the time the sale made sense for the Wests, owners of 2018 Breeders’ Cup Juvenile winner and subsequent Eclipse champion 2-year-old colt Game Winner (Candy Ride {Arg})–who will eventually become a future stallion for them–and had 2017 Eclipse champion 3-year-old colt West Coast (Flatter) entering stud in 2019 at Lane’s End. They also had graded winner American Freedom (Pulpit) at Airdrie to support this season, his second at stud.

As often happens after a young stallion gets exported or sold, New Year’s Day got his first graded stakes winner four months later. He was Maximum Security, a homebred for the Wests from his sire’s second crop, and he won the Florida Derby at Gulfstream Mar. 30 and thrust himself into the Derby picture as an undefeated winner of four starts–albeit after debuting in a $16,000 maiden claimer. From there he improbably went on to finish first in the Classic before ultimately coming down for interference.

If that and the subsequent legal actions protesting the DQ by the Wests weren’t topsy-turvy enough, the Brazilian syndicate that had purchased New Year’s Day inexpensively started getting significant offers for the horse, and though it was reported as far back as May in the BloodHorse that a Japanese farm had a deal in place to purchase him, the sale was only confirmed as completed this week in a Brazilian publication.

Revistahorse.com.br said on Wednesday that the legal work had been completed at the end of June and the sale price was $5 million–a significant return on investment for the Brazilians over a short period of time.

The stallion has since been shipped back to the U.S. from Brazil and is in quarantine at Darby Dan Farm, awaiting export to Japan, although the identity of the Japanese buyer hasn’t yet been officially revealed. Several sources, however, have told me that the horse is headed to the Yoshida brothers’ Shadai Stallion Station, which, if true, is a bit of a coup for them. It’s also another chance for the Street Cry horse to show what he’s got– this time in another environment and with an updated resume that lists a very good colt on it. Sometimes that’s all a horse needs to restart his career, and his prospects appear bright in Japan with Sunday Silence-line broodmares awaiting him. Mr. Prospector-line horses like New Year’s Day have been tremendously successful with Sunday Silence-line mares, particularly the Shadai-based King Kamehameha (Jpn) (Kingmambo), and the reverse cross with Sunday Silence-line sires and mares by Machiavellian (sire of Street Cry) or his sons has produced five Group 1 winners so far.

No one could have predicted the turn of events that made New Year’s Day a marketable prospect again. In fact, two weeks after Maximum Security won the Florida Derby, the sire’s 4-year-old Bourbon Resolution won the Glll Ben Ali S. at Keeneland, giving the stallion two new graded winners in his first two crops. Had either one appeared last year, the stallion would probably still be at Hill ‘n’ Dale. Such is timing and fate, because New Year’s Day was retired to stud late and the Wests didn’t have ample time or opportunity to select enough appropriate mares for his first year at stud as they did for his second season–from which they got Maximum Security.

Omniscient narrators, of course, don’t exist when it comes to the story of sire success or failure.

Consider the tale of Sunday Silence (Halo) and Easy Goer (Alydar), rivals and top-class runners. The former was arguably the better racehorse while the latter, who was always expected to defeat Sunday Silence more times than he did, had a significantly better pedigree and was considered by most as the standout stallion prospect of the two. You already know the tale, which could have been spun by an unreliable narrator and beggared belief: Zenya Yoshida took the son of Halo to Shadai in Japan, where Sunday Silence rewrote the history books and established an international reputation, while the celebrated and well-connected son of Alydar went to Claiborne carrying the promise of a future superstar stallion that wasn’t fulfilled.

In retrospect, Alydar, an outstanding stallion, never amounted to much as a sire of sires, but Halo, a good stallion, got two principal sons that have carried his line forward. The first was the non-stakes winner Southern Halo, a force in Argentina whose son More Than Ready has been a high-level stallion in both North America and Australia, and the other was Sunday Silence, whose son Deep Impact (Jpn), a Japanese Triple Crown winner, has been every bit as good–and maybe better than–his sire was to this point in their careers. Like his sire, Deep Impact has also established an international reputation from Shadai, and he’s underlined his quality with European Classic successes. Last year, Deep Impact’s Saxon Warrior (Jpn) won the G1 2000 Guineas and Study of Man (Ire) took the G1 Prix du Jockey-Club (French Derby), adding to the 2012 win of Beauty Parlour (GB) in the G1 Poule d’Essai des Pouliches (French 1000 Guineas).

Another successful son of Sunday Silence is Heart’s Cry (Jpn), who will be represented by G1 Japan Cup winner Cheval Grand (Jpn) in the G1 King George V and Queen Elizabeth S. at Ascot Saturday against Enable (GB) (Nathaniel {Ire}) and Crystal Ocean (GB) (Sea The Stars {Ire}). Cheval Grand carries three crosses to Halo (3x4x5) and is notably from a Machiavellian mare.

Speaking of second chances, Sir Prancealot (Ire) (Tamayuz {GB}), who entered stud in 2013 at Tally-Ho Stud in Ireland for €6,000, is getting another shot to further his career. It was recently announced that he will reverse shuttle from Cornerstone Stud in Australia to Rancho San Miguel in California, an unsual move but one that does make some sense. The TDN carried the notice on Tuesday here. Like New Year’s Day, Sir Prancealot only raced at two, but unlike the Street Cry horse, Sir Prancealot’s first 2-year-olds did enough to earn him the title of champion freshman sire in Great Britain and Ireland, but he was surprisingly dispatched to Australia for good in 2017 when he hit a slow patch.

Sir Prancealot is a Mr. Prospector-line sire through Gulch/Nayef/Tamayuz, and Northern Dancer-line mares have been instrumental in his success. His sire has two stakes winners from Nureyev-line Pivotal mares, including a Group 1 winner, and Beau Recall is out of a mare by the Nureyev-line Great Commotion, which suggests that daughters of leading California sire Unusual Heat (Nureyev) will suit the horse well, too.