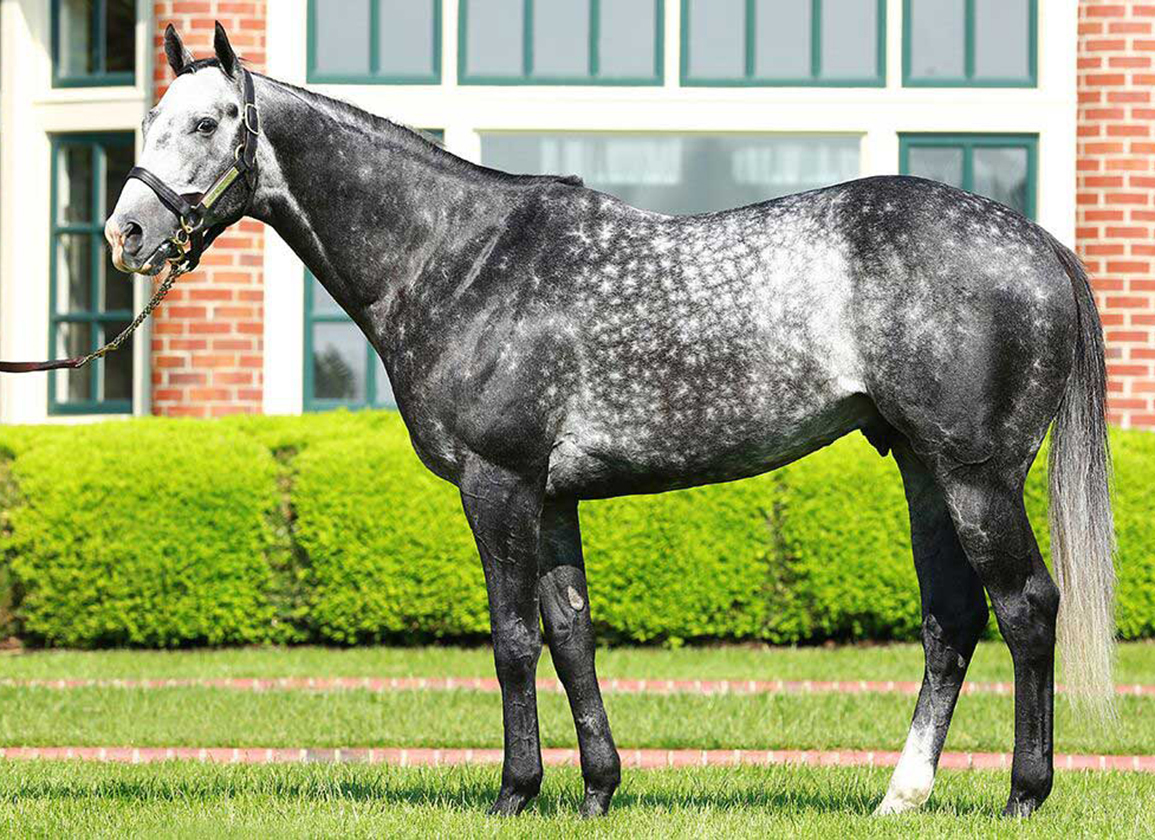 We've been waiting a long time for a high-class son of Unbridled's Song to make a statement at stud and stick around to carry his name forward in pedigrees, and that horse appears to be Lane's End's Liam's Map, who got his fourth Grade l winner over the weekend. Unbridled's Song was a terrific stallion and his daughters have made him one of the best broodmare sires around, but he's had difficulties finding sons at stud as good as his daughters. He's had some that showed glimmers of talent, and a few that have been useful, but none that have shown the elite promise that Liam's Map is demonstrating with only three crops racing.

The Brad Cox-trained Juju's Map won the Gl Darley Alcibiades S. at Keeneland on Friday, joining Liam's Map's other top-level winners Basin, Wicked Whisper and Colonel Liam. The 2-year-old filly, who was bred by Fred W. Hertrich lll in Kentucky, is one of 13 black-type winners for her sire. She'd sold for $300,000 at Keeneland September to Albaugh Family Stables, which also bred her sire.

Albaugh Family Stables is the racing operation of Iowans Dennis Albaugh and his son-in-law Jason Loutsch. They've been on quite a run since entering the business in the mid-2000s, mostly with colts, but lately they've been buying yearling fillies, with an eye to eventually breeding them to their stallion Not This Time (Giant's Causeway), who's also making quite a name for himself at Taylor Made with only two crops at the races.

It all started with the purchase of another filly, Miss Macy Sue (Trippi), as a 2-year-old at OBS June in 2005. She's the dam of Liam's Map and Not This Time, but before she became a producer, she was an accomplished runner, winning 11 races from 25 starts, including a Grade lll race, and earning $880,915.

“We started out with a small stable, and Miss Macy Sue was the first mare we owned. Once you get lucky with your first horse, you get the bug,” Loutsch said by phone on Sunday. “Miss Macy Sue took us to the Breeders' Cup and to all these wonderful places. It kind of gets in your blood, and you're just like, we want to do this, you know?”

Loutsch acknowledged, however, that “it's a tough business,” and he and his father-in-law run the operation with the bottom line in mind. That's why they sold Liam's Map for $800,000 at Keeneland September in 2012 to Vinnie and Teresa Viola's St. Elias Stable. Trained by Todd Pletcher–who has trained more top stallions than anyone in recent memory–Liam's Map raced in the name of Teresa Viola Racing Stables (except for his last start, after West Point Thoroughbreds had bought into him), winning six of eight starts, including the Gl Woodward S. at Saratoga and the Gl Las Vegas Breeders' Cup Dirt Mile at Keeneland to close out his career.

“We loved the horse, and we wished nothing but the best for Vinnie,” Loutsch said. “It was purely just a business decision at the time. It was a lot of money, and we figured if we sold him for a good number, we could go out and buy three or four other ones and break even. But it probably made us keep Not This Time. When we go to the sales now, we're still primarily buying colts. Dennis has a great time with them, and we've been to the Derby five times and we've got the dream that someday we're going to [win it].”

After Miss Macy Sue retired from racing, Loutsch contacted our firm to do the matings for her. (Albaugh Family Stables is a client of Werk Thoroughbred Consultants.) The mare's pedigree is unique and well constructed, with the strong influence of two heavyweights behind it: Leon Rasmussen, the former Bloodlines columnist for Daily Racing Form; and John Nerud, the master horseman and breeder who ran Tartan Farms in Ocala for William McKnight and family. The outstanding owner/breeder Frances Genter also kept her stock at Tartan.

In the mid-1980s, Nerud had contacted Rasmussen about helping him to reinvigorate the Tartan program. Rasmussen suggested that Nerud use some European-bred or -raced sires, which were plentiful in Kentucky at the time, and, most significantly, he suggested inbreeding some mares to Tartan's iconic females. Rasmussen was an advocate of inbreeding to superior females, and this is now widely referred to as the Rasmussen Factor, or RF. Nerud bought into the idea.

Tartan-bred Grade l winner Quiet American, for example, was a foal of 1986 by Nerud's Fappiano from Demure, by Tartan icon Dr. Fager. Underneath this conventional reading of the pedigree, Quiet American was inbred 4×3 to Tartan's influential mare Cequillo–the third dam of Fappiano and second dam of Demure. This was Rasmussen's favorite type of inbreeding, where the duplicated mare is in the direct female line of both the sire and the dam.

Moreover, Quiet American was also closely inbred 3×2 to Dr. Fager–the sire of the dams of both Fappiano and Demure.

Tartan-bred and Frances Genter-raced Unbridled, a foal of 1987 by Fappiano, was inbred 4×4 to Aspidistra–the dam of Dr. Fager and his outstanding half-sister Ta Wee–and 4×5 to Rough'n Tumble, the sire of Dr. Fager. In this case, Aspidistra was the fourth dam of Unbridled, but the duplication to the mare was through Dr. Fager, Fappiano's broodmare sire.

Unbridled's dam, by the way, was by the imported French Derby winner Le Fabuleux, who stood at Claiborne and was a Rasmussen favorite for the stamina he imparted to his offspring.

How does all of this relate to Miss Macy Sue, who was bred by Bryan J. Howlett in Florida? Howlett worked under Nerud at Tartan, and Miss Macy Sue's pedigree is a homage to Nerud and Tartan, because her Great Above dam Yada Yada, who was also bred by Howlett (and H&R Stable), is intensely inbred 2×3 to Ta Wee–perhaps the greatest female sprinter, as well as being Dr. Fager's half-sister. In this case, Ta Wee was Yada Yada's third dam and Great Above's dam.

Rasmussen also advocated the breeding of highly inbred mares, like Yada Yada, to outcrossed stallions to create “hybrid vigor,” and that's what Howlett did when he sent Yada Yada to Trippi to get Miss Macy Sue. Trippi, a son of the Forty Niner stallion End Sweep, has no duplications of ancestors through at least five generations.

There were many reasons why we liked Unbridled's Song for Miss Macy Sue, but one of them was the Rasmussen and Nerud architecture that was in place to recombine a Tartan-bred stallion in Unbridled, who brought in two strains of Aspidistra–the dam of Ta Wee and Dr. Fager–in the background, with the two crosses of Ta Wee in the background of Miss Macy Sue. But close up, Unbridled's Song, like Trippi, had no inbreeding in his pedigree within five generations, making Liam's Map himself relatively outcrossed within five generations (he is 4×5 Mr. Prospector and 5×5 In Reality).

On the surface, Liam's Map is bred similarly to Unbridled's Song's best racing son, the late Arrogate, as each is from a Forty Niner-line mare. Arrogate, who recently had this third winner, will be represented by only three crops, and perhaps he'll come up with a top-class son over the next few seasons. He was long considered the potential savior of this branch of the Unbridled line, but Liam's Map is the one proving to be a revelation. It's notable, also, that three of Liam's Map's four Grade l winners are from A.P. Indy-line mares–two from Bernardini mares and the latest from a Flatter mare. With so much A.P. Indy blood, particularly through Tapit, in the population, this could further benefit the stallion moving forward.

In 2019, Liam's Map was fourth on the first-crop list by progeny earnings behind American Pharoah, Constitution, and Palace Malice, but in the fine print you'll note that he led all freshman sires that year with two Grade l winners–Basin and Wicked Whisper. That's a sign of a stallion with potential.

Since, Nyquist had two juvenile Grade l winners in 2020, and Gun Runner has two already this year. Both are considered high-class stallions in the making.