Taking Stock: Khozan Leads as 2YO Season Heats Up 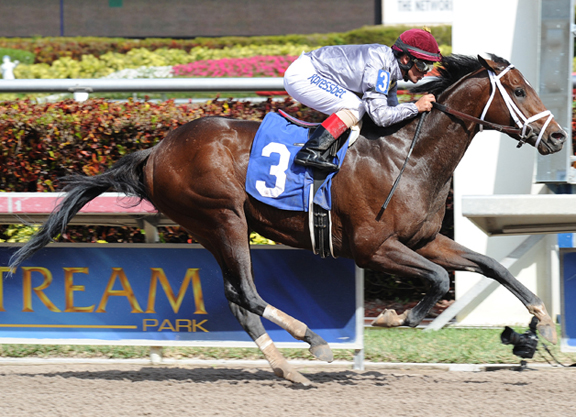 First-crop sires, headed by Triple Crown winner American Pharoah (Pioneerof the Nile), will be under the microscope as the 2-year-old season heats up, particularly at the marquee meets of Saratoga and Del Mar this summer. At this writing, Florida-based Journeyman Stud’s Khozan (Distorted Humor) leads TDN’s freshman sire list (see Top 10 on page 3) by worldwide earnings ($298,808), winners (7), and starters (15), but hot on his trail are WinStar’s Constitution (Tapit), Darby Dan’s Tapiture (Tapit), and American Pharoah’s barnmate at Ashford, Competitive Edge (Super Saver). The Triple Crown winner, the most expensive sire to enter stud in 2016 with a listed fee of $200,000, currently sits at number seven with three winners, but he’ll have action on Saturday and the next six months to launch his expected move to the top of the list with well-bred runners in North America and Europe.

Saturday’s Glll Bashford Manor S. at Churchill Downs includes the progeny of two freshman sires, Palace Malice (Curlin) and Commissioner (A.P. Indy), and a win for one or the other would launch him into the top 10 by earnings. Both were Classic colts at 12 furlongs–Palace Malice won the Gl Belmont S., and Commissioner lost the same race by a head to Tonalist (Tapit), who’s also represented by his first crop this year–and an early season graded score would be gravy for either one, as their pedigrees and race records suggest their offspring will be better later this year as distances stretch out or at three.

Similar thinking applies to American Pharoah, even though he was a 2-year-old champion. American Pharoah won his first race in his second start, and that was in the Gl Del Mar Futurity over seven furlongs in early September. He cemented the championship with a win later that month in the Gl FrontRunner S. at Santa Anita at a mile and a sixteenth before missing the Gl Breeders’ Cup Juvenile with a foot issue.

The stallion was unlucky to have son Maven, a first-out dirt winner at Aqueduct in April for trainer and breeder Wesley Ward, scratched from the G2 Norfolk S. at Royal Ascot last week due to soft ground, but Maven will reappear in France, where he goes in the G3 Prix du Bois at Chantilly on Saturday, hours after Monarch Of Egypt lines up for the G2 Railway S. at the Curragh in Ireland. It’s notable that American Pharoah’s other two winners to date, Monarch Of Egypt (from the Galileo {Ire} mare Up {Ire}) and Saqqara King (from the Tapit mare Joyful Victory), have come on turf in Europe, where Coolmore has bet heavily that he’ll succeed. If he does, it will be a victory for the predominately dirt-acting Unbridled line, which hasn’t fared well across the pond–and that includes Juddmonte’s Empire Maker (Unbridled), the sire of Pioneerof the Nile.

Empire Maker’s best runner was champion filly and mare Royal Delta, a multiple Grade l winner of $4,811,126. Her half-brother Khozan wasn’t anywhere near as accomplished, but he was talented and seemed destined for Grade l success until an injury ended his career after only two starts.

Bred by Adena Springs and trained by Todd Pletcher for Al Shaqab Racing, which had purchased him for $1 million at the 2014 Fasig-Tipton Florida select 2-year-olds in training sale after he breezed in :9 4/5, Khozan debuted at three, impressively winning as the favorite in January at Gulfstream Park by 3 3/4 lengths (breaking from post 14) with a 102 Beyer Speed Figure for seven furlongs. He was promptly named a ‘TDN Rising Star‘ and reappeared a month later at the same track in an allowance/optional claimer at a mile, and this time won off by 12 3/4 lengths. Thinking ahead to the Gl Florida Derby and beyond, Pletcher had used the race to place and rate the son of Distorted Humor behind others, and the colt had passed the test with flying colors, earning a 90 Beyer. Leading up to the Florida Derby, Khozan was a talking horse, with some writers at the time even speculating about whether he’d be the one to end the “curse of Apollo.” Unfortunately, Khozan hurt his right hind ankle before the race and never started again. 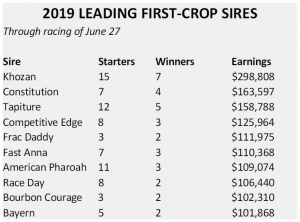 Brent and Crystal Fernung of Journeyman Stud put the deal together with Al Shaqab and Gil and Marilyn Campbell of Stonehedge Farm South to stand Khozan in Ocala for the 2016 season, and the horse couldn’t have had better connections to launch his career. The Fernungs and the Campbells had track records of making stallions. Journeyman stood leading Florida sire and speed influence Wildcat Heir (Forest Wildcat) until his untimely death from colic in January of 2015 at age 15, while the Campbells notably made Shananie (In Reality), Sword Dance (Ire) (Nijinsky ll), and the unraced West Acre (Forty Niner) among a slew of other usable sires at Stonehedge South–formerly Waldemar Farms, where leading Florida sire What a Pleasure once stood.

Had Khozan won the Florida Derby, he’d have met American Pharoah in the Gl Kentucky Derby. Fate intervened, of course, and instead he entered stud for $5,000 versus the mammoth fee for the Triple Crown winner, but they are in a race now and the Florida-based horse will have to be caught because he’s put up quite a showing so far on the front end. Of his seven winners, five have won maiden specials, but these early season contests have all been at five furlongs or less. In true Florida fashion, Khozan is ably demonstrating that his progeny come to hand early and have speed, but he’ll need horses that stay farther to fight off the expected challenges of American Pharoah and other heavy heads later in the season to maintain his spot. The strong Campbell broodmare band, which bred and raced the West Acre Grade ll winner Ivanavinaot–dam of champion Songbird (Medaglia d’Oro)–is playing a pivotal role so far and should help him: Five of Khozan’s seven winners to date are homebreds for the Campbells, whose horses tend to stay a mile and a sixteenth at two because they are aimed, it seems, every year for the Florida Sire Stakes series that include two $400,000 stakes races for colts and fillies at that trip. Two Khozan homebreds were entered in the $75,000 Golden Isle S. at Gulfstream on Friday.

Khozan’s champion half-sister stayed 10 furlongs and his sire also got plenty of staying horses, including Kentucky Derby winner Funny Cide and Belmont S. winner Drosselmeyer. He also has an uncannily similar profile to Hill ‘n’ Dale’s Maclean’s Music (Distorted Humor), who also was unraced at two but won his lone start at three at six furlongs with a gigantic 114 Beyer. Maclean’s Music, who entered stud for $6,500, got GI Preakness S. winner Cloud Computing from his first crop. In fact, it appears that the faster sons of Distorted Humor are becoming his better sires, with Grade l-winning sprinter Jimmy Creed at Spendthrift, who also was unraced at two, currently leading all third-crop sires.

Khozan is represented by 60 named 2-year-olds in his first crop. American Pharoah has 114, which gives him a massive advantage going forward because he has pedigree and physiques behind him as well. American Pharoah was the star at the yearling sales last year and his success wouldn’t surprise anyone. In fact, it’s an unfair comparison to judge him against Khozan, and the only reason they are in a conversation together is because of what Khozan has done so far.

Some other heralded prospects who are even further behind Khozan than American Pharoah at this point in time include Carpe Diem (Giant’s Causeway) and Tonalist with one winner each; Liam’s Map (Unbridled’s Song), no winner yet from three starters; and Honor Code (A.P. Indy), no winners from two starters. Many of these will start to heat up soon at Saratoga and Del Mar.

It’s going to be an interesting race this year.