Aside from the threats to life and health, the global coronavirus pandemic has created massive economic and socio-political turmoil and fear over a short time span. In times like this–there haven't been many quite like this in recent years, except for the economic meltdown of 2008 and the crash of 1987 (Black Monday)–it's difficult to see the forest for the trees, but the worry some people have that things have changed for the worse is clear and real. Dr. Anthony Fauci said so himself.

The Director of the National Institute for Allergy and Infectious Diseases, Fauci said on Monday at the White House Coronavirus Task Force presser that, “If you want to get back to pre-coronavirus, that might not ever happen.” That prognosis may be applicable to foal crops as well. There's a good chance that production could start to decline from present levels, which is a sobering thought for the bloodstock industry and one that has implications for all sectors of the business, including the racetracks that need the horses to put on the show.

Without enough horses, tracks will close, and the industry will continue to contract, just as it has in the past after the other two massive economic upheavals.

Each of these economic disruptions changed the subsequent bandwidth of foal production, and another collapse will likely do the same. But will there be a crash to match 2008 and 1987 levels? That's the question.

You don't have to be an economist or a Wall Street analyst to understand what's happening to the economy or the stock market at this point. The federal government is unreliable, unemployment has zoomed to a historic high of 16 million, industries are cash strapped, the national debt is bloated beyond recognition, U.S. household debt is rising, GDP is grinding into low gear and is forecasted to fall 30% in the second quarter, and a bull-into-bear stock market's volatility–massive fluctuations of the Down Jones Industrial Average (DJIA), for one–is a daily roller-coaster ride. Unless a COVID-19 vaccine appears as a white knight out of the blue sometime soon, we're all, including the breeders that produce foals every year, vulnerable to the black swans.

The smell of fear usually precedes the stench of death, and this fear is captured in an instrument called the VIX, or volatility index. It's also known on Wall Street as the “fear index.” It was developed by the Chicago Board Options Exchange (CBOE) in the early 1990s and is a forward-looking index that measures market stability–or instability. Values larger than 30 usually indicate high levels of volatility and fear–prolonged periods of which are not healthy. This presaged the 2007 to 2009 meltdown. 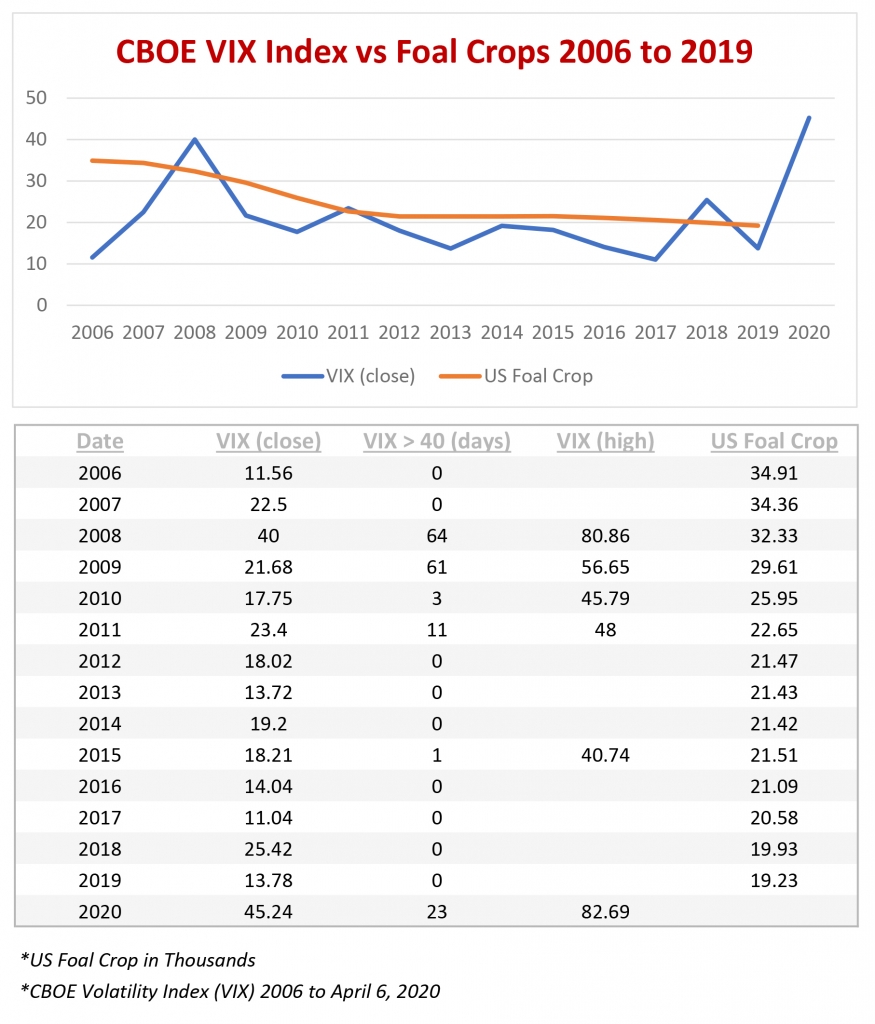 The graph illustrates the upward spike of growing fear from 2007 to 2008 that preceded the market crash in early March of 2009. The chart also notes that there were 64 trading days (from a total 252 for the year) in 2008 where the VIX was above 40, with a high of 80.86. This happened during the latter part of the year.

These 125 days of 40-plus VIX indicated the bottoming of the DJIA, which happened on Mar. 6, 2009.
Since then, the VIX has been mostly stable during the stock market's 11-year bull run, with only three years with year-end closing values above 20 and none approaching the high-volatility threshold of 30, much less the far more dangerous levels of 40 and up.

In general terms, the lower the VIX value, the more stable the stock market and the better it performs, and the converse tends to be true, too. Rising VIX values, which signal volatility, mostly go hand in hand with a declining stock market. With 23 days (it's now 25, through Apr. 8) of the VIX running higher than 40, this year is already in second place over the last 12 years behind the combined five-month period between late 2008 and early 2009 when the VIX was at 40 or higher for 125 days. That's not a good sign, particularly if the trend continues, and it may indicate that we haven't yet reached the bottom, bad as the present currently is.

As the graph notes, foal crops and the VIX have remained flat during the 11-year bull market run, but yearling prices since the crash in 2009 have substantially rebounded and grown since.

The sizes of annual foal crops, however, were completely unaffected by a rising stock market over this time span. This striking anomaly indicates that even in the best of times, the foal crop will not rise, but under adverse economic conditions, it falls significantly and will likely fall again if the market bottoms.
This peculiar relationship of flat foal crops within a rising stock market also suggests that the top parts of the yearling market are healthy–mirroring society at large, where the wealthy keep getting a greater piece of the pie–and those participating in this sector are expanding their equine holdings as those at the bottom are being squeezed out, keeping foal production stable through a statistical sleight of hand. An apt analogy would be the stallion market, where a fewer number of the most commercially popular stallions are expanding their books at the top of the market at the expense of less-commercial sires who are breeding smaller numbers of mares, while the annual foal crops remain about the same each year.
This, essentially, amounts to consolidation at the top within a contracting framework, where a fewer number of stallions, or breeders, control a larger share of the market. You can see a parallel in racetrack ownership, too, with entities like TSG, CDI, and NYRA controlling the lion's share of the major tracks and betting handle.

Smaller breeders, from the middle of the market down, are most at risk if the market crashes. But even the big players aren't immune to catastrophic market recessions or depressions, and should something of that magnitude occur–and let's hope not, though the fear index suggests it could–it's odds-on that foal crops of the future will diminish, just as they have after other upheavals, but at greater percentages than before because fewer entities are holding more bloodstock.