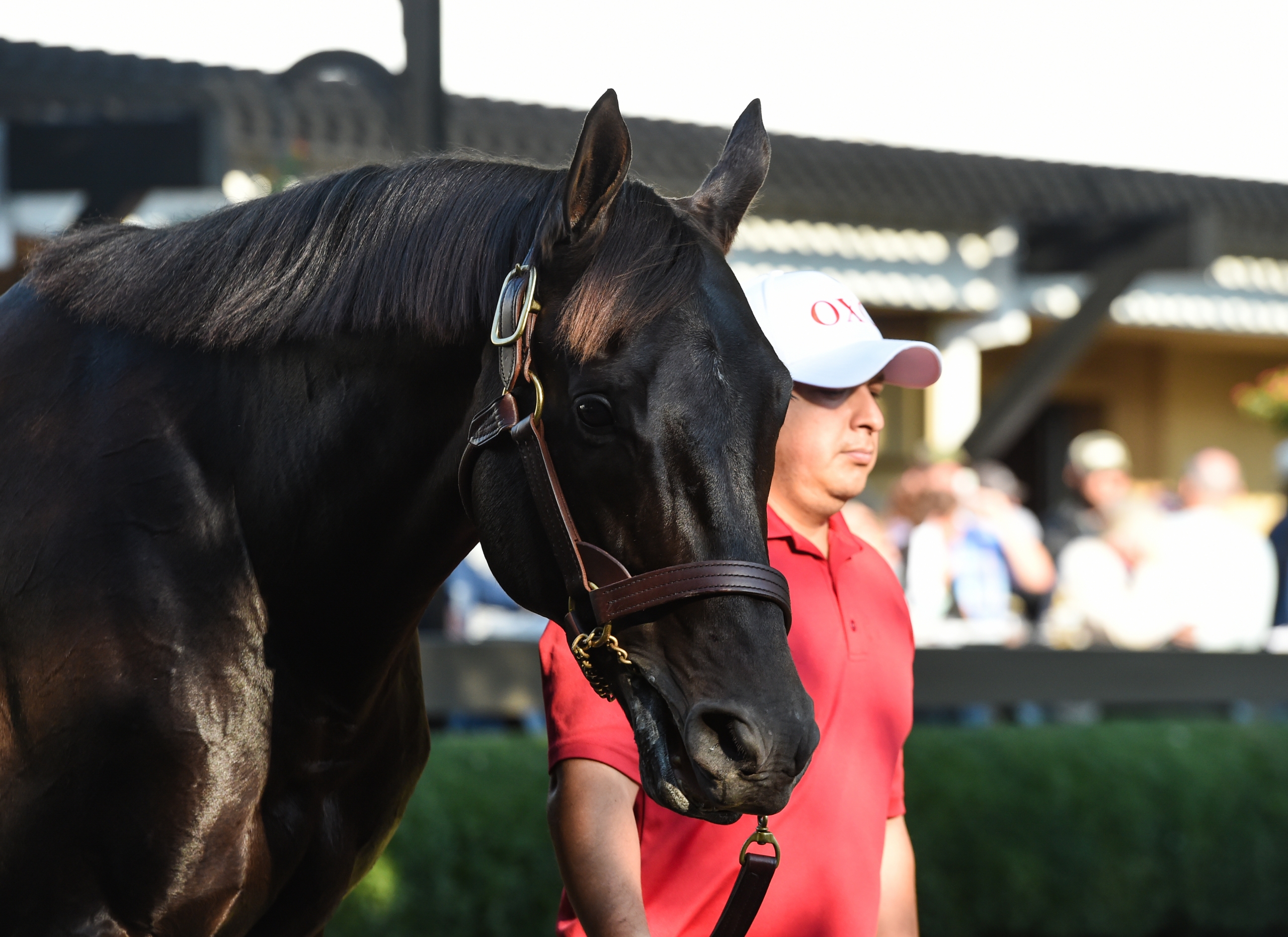 Instilled Regard, who will stand his second year at Taylor Made in 2022, parades in front of potential breeders in the Fasig-Tipton back ring this past October | Jon Siegel Photo

In about three weeks, another breeding season will begin, but that's the easy part for stud farms.

Getting those mares was the hard part, and that process played out over the last four or five months, an annual courting ritual of farms and breeders. It includes behind-the-scenes hustling, heavy-duty advertising campaigns, and some occasional arm twisting or deal making, because except for a handful of elite or popular sires that breeders are banging doors down to get into, most stallions need mares, usually as many as possible to fill books that can sometimes number more than 200.

The Jockey Club will take an active role in changing that somewhat, beginning with stallions born in 2020 and later. The organization issued a ruling that will limit books to 140 mares a year when those colts go to stud in a few years. Well, that's if TJC ends up prevailing, because there are some lawsuits, brought by a few farms that would like to keep things as they are now, floating around to challenge that rule. Some of these farms are big-time players and they're not going to go away quietly, but that's a story for another day.

In the meantime, stud farms need as many mares as they can get to stallions, as I said. It's either to recoup their initial investments in these stallions or, if they're lucky, to make money. The most commercial stallion prospects–the champions and “horses of a lifetime”–cost an arm and a leg to procure off the track, and lesser recruits are always in danger of not getting enough mares to cover costs. That's why you see so many ads for them in that important first year they enter stud. These days, you see even more of this on social media, where everyone seems to be attending one stallion show or another and then posting amateur photos that in many cases will make farms cringe, but, hey, that's the price of publicity, and most folks on Twitter or Facebook see everything as either “sexy,” “handsome,” or a “hunk,” so it's not all bad.

Stud farms need to front load new horses, meaning they will try to breed as many mares as they can, not only for the income it generates but also to guarantee that they have as many first-crop runners as possible to have a chance at success.

Everyone, of course, wants to find the next Gun Runner (Candy Ride {Arg}), who had a phenomenal run in 2021 with his first 2-year-olds, but most horses are destined for failure, at least in the commercial sense–which is how the breeding industry operates. You've probably noticed that even some leading freshman sires have been sold abroad after they couldn't sustain the pace constructed for them with boatloads of mares, numbers which most are unlikely to see again, in their first books. And once the numbers and quality drop off, so too does sire performance, for the most part.

If a farm has an elite stallion or a particularly attractive first-crop horse, a stallion director sometimes might let you in to him if you'll send a mare or two to a lesser stallion in his third or fourth year on its roster, a classic case of scratching your back if you'll scratch his, except in this case you might get a couple of foals you don't really want just to get the one you do.

Or maybe a stallion director will give you a good deal on a stud fee if you send multiple mares to a stallion, which is usually more common with horses after their first year, when demand and stud fees drop off. There are plenty of deals like that to be found because these types of horses aren't popular with commercial breeders, and it's a simple enough concept to understand.

I once explained this to a guy at TJC. Look, I said, imagine you're a commercial breeder for a moment. Would you want to breed to a horse in his third year at stud, when you know that you're going to sell a yearling by him when his oldest foals are three? What if that stallion has bombed with his 3-year-olds and 2-year-olds by the time you're sending your yearling into the ring? You'll likely get hammered in sales ring, right? Can you see why breeders, I said, prefer to patronize first-year horses who don't have black marks against them when their first yearlings sell? He slowly and deliberately nodded in agreement, but his expression–a light bulb going on–had already beaten the nod to the punch.

What was left unsaid in that conversation was that that paradigm isn't going to change just because you limit a stallion to 140 mares.

What it will do, however, is give more stallions a shot at stud, because more farms will have more first-year horses to sate commercial demand, and by the numbers alone, that will reduce books for each horse at each price point as more stallions enter the market. The net effect will mean more diversity and more cheaper horses at stud, too, which isn't a bad thing at all, right?

Of course, there will be more churn and burn, too, with stallions getting even shorter leashes on which to operate, but there's a Darwinian element to this that's fair enough: Either make it with your first 2-year-olds or get sent to Korea or Turkey or Louisiana, because we don't have time to see how the 3-year-olds will do, as commercial breeders aren't interested in breeding to a horse in his fifth season at stud unless he's a star.

That's what happened to Daredevil (More Than Ready). Sold to the Turks before his 3-year-olds raced, he was brought back to Kentucky after the success of Swiss Skydiver and Shedaresthedevil, but with a twist. He's owned by the Jockey Club of Turkey, and that entity is standing him at Lane's End. So, we might be seeing a new trend with hastily exported horses, if they succeed after they've been sold and are then brought back by their foreign ownership entities to capitalize on commercial demand in North America.

In fact, Horse of the Year Knicks Go (Paynter) is owned and raced by Koreans in North America and was initially destined for stud duty in Korea, but after his success last year, his owners decided to stand him here, at Taylor Made. If he doesn't make it here, he can always be sent home, but if he's a success, the foreigners will reap the financial rewards.

Paradigms, therefore, are also shifting within the overall commercial scheme we're operating under, which is yet another change to a series of changes that began when tightly held syndicates that limited horses to 40 mares gave way to increasingly bigger books that were fashioned to make money, necessitated by bidding wars for the most desirable stud prospects.

Change is necessary for growth, and one change that'd be refreshing to see is a move away from the commercialism that's dominating the breeding industry. How? Well, how about more people racing the horses they breed?

Homebreeders once made this a sustainable business– in fact, they also made it more sporting and more humane, because there's a tendency to give a horse more time if you've foaled and raised him–and though we're far removed from that model these days, a wider array of cheaper stallions might spur some growth in that area and make it viable again to breed to race, particularly as purses have risen to levels never seen before.     And at the top end, those multi-member partnerships speculating on yearling colts as potential stallion prospects may in the future form multi-ownership groups to race some of the foals of their most successful prospects.

If some of that were to happen, it would strengthen the underpinnings of a business that's way too top heavy on selling alone.

Wishful thinking? It's a thought, anyway.