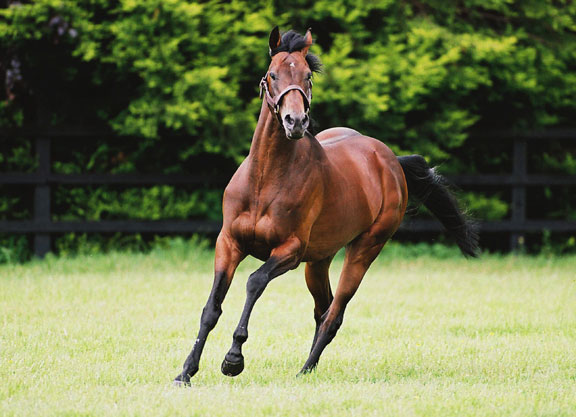 How’s this for an illustration? The Irish entity, which generally campaigns its runners under the various partnership colors of Susan Magnier, Michael Tabor, and Derrick Smith, has won an astonishing 25 of the past 49 British Classics over the last decade (see the accompanying charts of the five races), with the G1 St. Leger at Doncaster yet to be contested. And it’s possible that the partners could win that race, perhaps with Love (Ire) (Galileo {Ire}), who followed up her win in the G1 1000 Guineas at a mile with an exhilarating nine-length show of stamina in the mile-and-a-half G1 Epsom Oaks.

“[Trainer] Aidan [O’Brien] is thinking of the Yorkshire Oaks for Love and then the Arc at the moment,” a Coolmore spokesperson told me Wednesday, but those plans aside, she must still be considered an outside possibility to contest the final British Classic in September over an extended mile and three-quarters. She obviously handles a mile and a half easily and projects to stay farther, unlike Coolmore’s 2016 Guineas/Oaks winner Minding (Ire) (Galileo), who was cut back in distance after her Oaks. In 1985, Oh So Sharp (Ire) (Kris {GB}) was the last to sweep the “Filly Triple Crown,” and Coolmore has an appreciation for historical accomplishment: in 2012, it attempted the Triple Crown with G1 2000 Guineas and G1 Epsom Derby winner Camelot (GB) (Montjeu {Ire}) but fell just three-quarters of a length short. Nijinsky (Northern Dancer) was the last colt to win the three races in 1970, and he was trained at Ballydoyle in Ireland by Vincent O’Brien, Susan Magnier’s father and John Magnier’s father-in-law. Aidan O’Brien now runs the historic yard for Magnier.

Coolmore has a global presence–the partners’ Maximum Security (New Year’s Day), the U.S. champion 3-year-old colt of 2019 who is co-owned with Gary and Mary West, had been scheduled to return to the races Saturday at Del Mar before the track cancelled its meet until July 24–but Coolmore’s successes in the five British Classics over the last 10 years is unprecedented and is the primary focus here, because any attempt to broaden that scope in this space could lead to vertigo.

There’s a direct correlation between Coolmore’s British Classics haul and its late flagship sire Sadler’s Wells (Northern Dancer), whose two prepotent sons Galileo and Montjeu propelled it into a new stratosphere as their first crops hit the track in the aughts. The former, bred by D. Tsui and John Magnier’s Orpendale, was the first Epsom Derby winner for Coolmore, Sadler’s Wells, and the then-new Ballydoyle trainer Aidan O’Brien in 2001; the latter, bred by Sir J. Goldsmith and trained by John Hammond, was a G1 Prix du Jockey-Club (French Derby) winner in 1999. 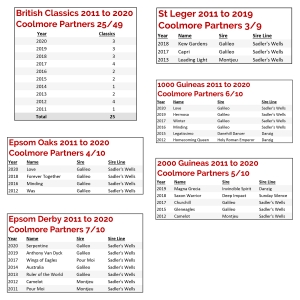 Galileo and Montjeu transitioned from Derby winners to sires of Derby winners, and this is probably one reason why Coolmore chases the Classics, particularly the Epsom Derby, with multiple entries and calculated precision. The Derby is, after all, the race from which Galileo graduated to become one of the greatest sires of the sport. He is currently the all-time leading sire of Group 1 winners with 86 and counting to date, and Coolmore no doubt would like to find his successor from the same race, and why not? Galileo, now 22, has five Epsom Derby winners, more than any other stallion, and Montjeu, who died prematurely at age 16 in 2012, is in co-second place with four, and he was on a pace to have more than Galileo before his death. Together Galileo (16) and Montjeu (5, including one through his son Pour Moi {Ire}) account for 21 of Coolmore’s 25 British Classics over the last decade, and several of their Derby-winning sons are young sires at Coolmore.

Galileo was raced by Sue Magnier and Tabor while Montjeu raced for Tabor alone, but since then the Coolmore partnership horses have raced mostly in the names of all three partners, and it’s this group that has made a habit of plundering the British Classics with Aidan O’Brien at the helm from Ballydoyle, where Vincent O’Brien had done the same with horses for Robert Sangster, John Magnier, and others in an earlier era. Since 2012, Ballydoyle has sent out at least one British Classic winner every year, and except for the Andre Fabre-trained 2011 Epsom Derby winner Pour Moi and the 2015 1000 Guineas winner Legatissimo (Ire) (Danehill Dancer {Ire}), trained by the Magniers’ son-in-law David Wachman, the rest were or are based at Ballydoyle.

The Epsom Derby is the most prestigious and sought-after Classic in Europe, as the Gl Kentucky Derby is here, and to win the mile-and-a-half “Blue Riband of the Turf” once is accomplishment enough. Several owners have won the Classic multiple times since Diomed won the first in 1780, a few as many as five times, including five wins each for the current Aga Khan and his grandfather, but wrap your head around this stunning achievement: the Coolmore partnership has won seven of the last 10 renewals, including this year’s race with Serpentine (Ire) (Galileo)–a pacemaker at that, flying unfamiliar gray silks instead of the ubiquitous navy blue or plain pink of Magnier, the orange and blue of Tabor, or the purple and white of Smith. That’s a statement of depth and an embarrassment of riches.

Moreover, as individuals, no one owner has won the race as many times as Susan Magnier and Michael Tabor, who have owned nine winners. Aside from Galileo and Serpentine, they include Anthony Van Dyck (Ire), Wings of Eagles (Fr), Australia (GB), Ruler of the World (Ire), Camelot (GB), and Pour Moi (Ire), plus High Chaparral (Ire) (Sadler’s Wells), who won the Derby the year after Galileo did.

In total, 22 individual horses accounted for these 25 Classics, with Love, Minding, and Camelot the dual winners. As noted earlier and is evident in the charts, most of these Classic winners trace their male lines to Sadler’s Wells through either Galileo or Montjeu, with only three tracing to Danzig and one to Sunday Silence–and three of these have Galileo (2) or Montjeu as their broodmare sires.

Clearly, Coolmore hit three extraordinary gushers with Sadler’s Wells, Galileo, and Montjeu, which it milked to advantage over other big-name European-based outfits, particularly the Maktoums, who’d ignored Coolmore sires for a while, but the 22 Classic winners are also a testament to the organization’s ability to buy, breed, and source top-level talent, something that John Magnier honed a long time ago when he was part of the buying team for Sangster with Vincent O’Brien.

Of the 22, seven were purchased at auction and 15 were either homebreds or bred by various Coolmore partnerships or associates. Coolmore oraganizational captain Paul Shanahan’s Lynch Bages, for example, is breeder or co-breeder of Pour Moi, Capri, and Leading Light.

I venture here gingerly because I don’t want to drop the mic on you, but Coolmore has also raced six of the past 10 G1 Irish Derby winners, including this year’s winner, Santiago (Ire) (Authorized {Ire}), who also was bred by Shanahan and is part of a 2020 Derby double for him as the co-breeder of G1 South Australian Derby winner Russian Camelot (Ire) (Camelot). Both colts are by Montjeu stallions from Danzig-line mares, a version of the Sadler’s Wells/Danzig cross that Galileo has particularly exploited with Danehill and of which Juddmonte’s Frankel (GB) (Galileo) is its greatest expression.

And in France? The Gurkha (Ire) (Galileo) won the G1 Poule d’Essai des Poulains (French 2000 Guineas) in 2016, and this year Fancy Blue (Ire) (Deep Impact {Jpn}) accounted for the G1 Prix de Diane (French Oaks), giving Coolmore a total of six European Classics so far in 2020 with five individual horses: Fancy Blue, Peaceful, Santiago, Serpentine, and Love. Another could be added to this list from the Irish Oaks Saturday.

If you’re still standing, may I suggest a seat?