Taking Stock: Being Inclusive in an Exclusive Game 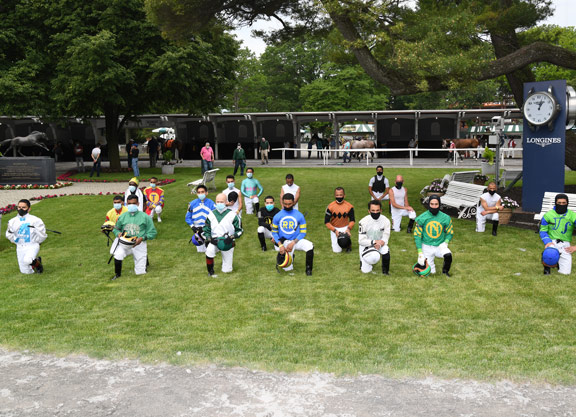 Is it even possible to be inclusive in an exclusive game?

Kudos to Sue Finley and this publication for its series on diversity and inclusion, featuring several notable individuals who’ve made poignant cases for the benefits of opening racing’s upper-echelon doors to Black people, people of color, women and other marginalized groups. However, the ways in which racing has been drifting are going to make this difficult.

Money is power, and if you take away the participation of wealthy foreign stakeholders–South Americans, Europeans, and Middle Easterners–racing in this country is controlled by rich white men (and a smattering of women), most of them well over 50. This is President Trump’s GOP demographic, a group that’s likely to disapprove of the Black Lives Matter (BLM) movement that’s exploded across the country since the killing of George Floyd and is the reason we’re even discussing race, diversity and inclusion in racing in these pages now.

It’s well known historically that Black people were integral to the development of racing in this country. Black jockeys dominated the first 28 years of the Kentucky Derby, winning 15 times since the race’s inception in 1875. In 1902, Jimmy Winkfield was the last of them to win the race and he later fled the country to ride abroad as Jim Crow laws and the institutionalized racism and segregation of the era proliferated. This was a period during which neo-Confederate statues were frequently erected purely as symbols of white power.

Almost a decade after the last Black jockey won the Derby, the third-place finisher in the 1911 Preakness S. was a stakes winner by the name of The Nigger, a black gelding by the celebrated racehorse and sire Hamburg from the mare Black Venus. Imagine racing’s legacy if he’d won the race, wasn’t a gelding, and became a foundation stallion? Black Servant, a son of the influential sire Black Toney, did become an important sire, but he narrowly lost the 1921 Kentucky Derby to a stablemate named…wait for it… Behave Yourself. This was also the year of the Tulsa race massacre on “Black Wall Street.”

One hundred years later, a lot has changed, but some sentiments remain the same. Though racial and social progress was made throughout the turbulent mid-century civil rights era, Black participation in racing has unfortunately diminished to a paltry level since the days of Winkfield. These days, it’s a Latinx population that primarily services racing as caretakers on farms and tracks as Blacks once did, and Latin jockeys are among the best in the game. Many of them have experienced discrimination along the way, as Angel Cordero, Jr. noted recently in his comments in TDN. They stand to benefit from the BLM movement, which in a manner and scale not seen since the civil rights movement, is pointing out widespread and systemic societal and institutional racism. It’s significant that about 20 jocks took a knee in the paddock at Belmont Park a month ago in a show of solidarity with BLM and the Floyd protestors.

BLM is effecting change, and you’ve seen many examples of this over the last month. NASCAR has banned the Confederate flag and made a notable and unexpected stand supporting Black Lives Matter. Other sports, companies, well-known individuals, and universities have taken a stand as well or made policy changes resulting from the movement’s activism. Mississippi recently retired its Confederate-influenced state flag and the University of Florida did away with its popular “Gator bait!” chant, a local term that has an historical but little-known connection to alligator hunters who used young Black children as bait. Yes, this is true, and I’ve read newspaper clippings from the early 1900s on this.

BLM isn’t a radical or terrorist group, as some “Law and Order” Trump supporters have portrayed it. It’s a movement advocating for equality. Racing should embrace this in a combined statement from its various industry groups and tracks. So far, a smattering of tracks, a few organizations, and some individuals have responded with statements against racism and advocated for diversity and inclusion, but none that I can recall has mentioned Black Lives Matter by name.

I believe that The Nigger’s toxic name (along with his pedigree) has been deliberately purged from The Jockey Club’s online Equineline database. I say it’s “deliberate” because the pedigree of his dam, Black Venus, a foal of 1896, is still in the database, and there are two British-bred horses from the 1950s named Nigger in there as well, but they’re not American-registered and not the responsibility of TJC.

I don’t know when The Nigger was deleted–or maybe he wasn’t ever included online – but that he’s not included is acknowledgment that TJC was embarrassed by a part of its history as the registrar of the breed. Should he have been deleted or not included? I don’t think so. This isn’t the same as dismantling Confederate statues built well past the Civil War era in the early 1900s or the 1950s solely as white power symbols. Those structures were erected to intimidate. The Nigger, on the other hand, exists in American racing history as a stakes-winning foal of 1908. Taking him out of the database obscures the historical fact that someone gave him a name that was acceptable for the time and that’s worth remembering as we ponder commentary on race and diversity, even if hearing of this makes us uncomfortable today.

One hundred years wasn’t that long ago.

TJC, which is comprised mainly of rich white men, has taken a leading role over the last decade in addressing issues, including breakdowns and drug usage, that have plagued the image of the game, and it has actively participated through its America’s Best Racing (ABR) initiative to craft new imagery aimed at a younger demographic that takes the focus away from the “degenerates” in the grandstand to the slickness of the clubhouse. The organization and its allies have adopted a “Law and Order” approach to the former by advocating for the federally mandated Horseracing Integrity Act that would address medication issues through a stern central authority, and a “frat-boy bro” approach to the latter through imagery that celebrates the swanky, white, and young fedora-wearing crowd enjoying a day at the races at major tracks.

If this sounds as if racing is getting more exclusive and less inclusive these days, it is. In fact, today there are smaller groups of people controlling larger pieces of the pie and economics plays a big role in this. This type of consolidation is evident in racehorse ownership (partnerships), conditioning (super-trainers), track management (Stronach Group), and the bloodstock industry (big books for elite stallions).

Against this backdrop of a smaller club of more powerful folks, it’s going to be harder for racing to be diverse and inclusive, especially because racing’s leaders and their acolytes, who across the board tend to be younger versions of their bosses, dictate policies meant mostly to preserve or enhance their interests. But sometimes they assume that what’s best for them is what’s in the best interests of everyone in the sport, which isn’t true and has led to some fissures between groups.

Even when racing thinks it’s being edgy and different, it’s frequently not, and it sometimes perpetuates behaviors that aren’t amenable to diversity and inclusion. For example, it seems every major track has had at one time or another some association with Barstool Sports, an irreverent group that appeals to frat-boy culture and unabashedly spouts misogynist and racially insensitive commentary for cheap laughs. This shouldn’t be acceptable, and a Black person or woman executive might have explained this in the boardroom.

Diversity and inclusion can only help racing navigate the future.

Keeneland walked the talk Thursday afternoon. Keeneland’s Trustees, many of whom are TJC members, announced that for the first time in its history a woman, Shannon Bishop Arvin, would be named its CEO at the end of the year to replace the retiring Bill Thomason.