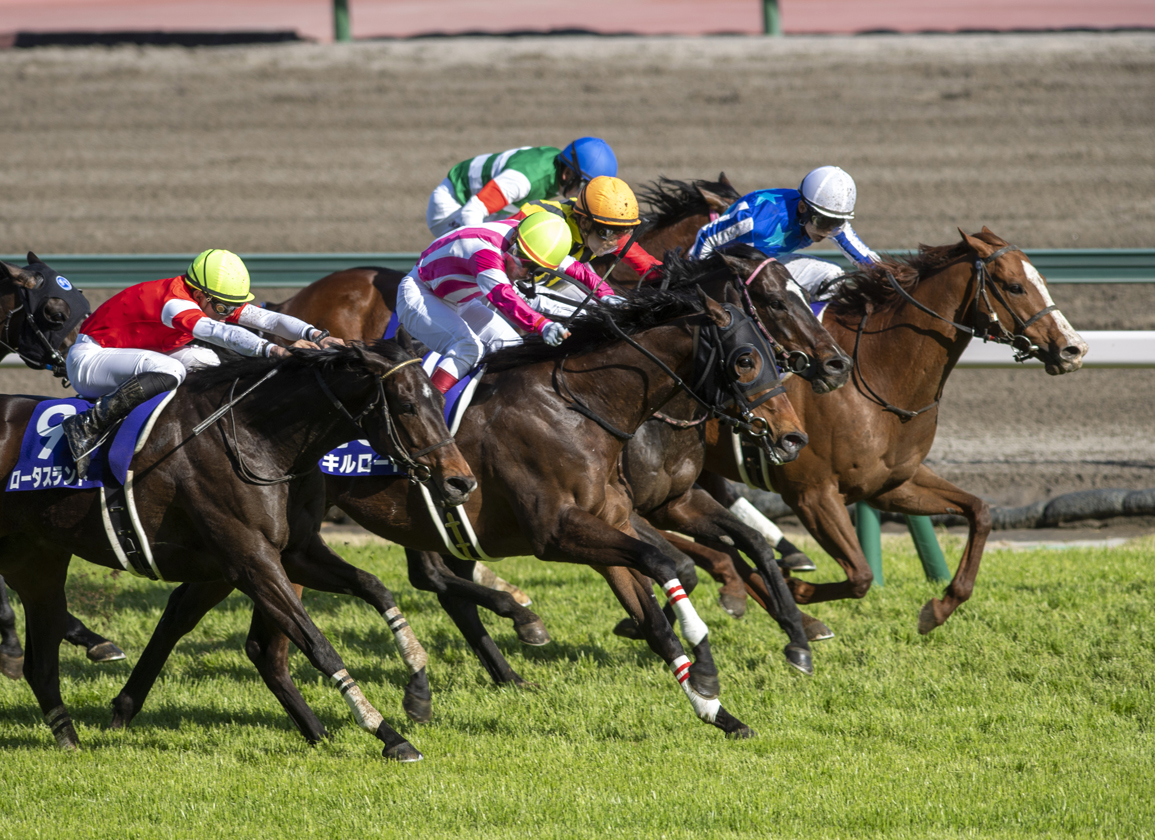 The 6-year-old entire was a 26-1 shot, and took up his customary position near the tail of the field against the rail. The 6-5 crowd's pick Resistencia (Jpn) (Daiwa Major {Jpn}), meanwhile, cut out fractions of :22.40 and :44.40, while pressed by Gendarme (Kitten's Joy). Ridden for luck on the far turn, the Katsushige Muraki runner still needed to pass most of his rivals when turning into the straight, but an animated Kyosuke Maruta gunned the blaze-faced chestnut through the rail gaps at just the right moments.

Resistencia was sending out distress signals 200 metres from home, and a host of foes were still in with a chance. Naran Huleg's strong drive had already carried him to within a couple lengths of the lead. He dove between Resistencia and Travesura (Jpn) (Dream Journey {Jpn}) 100 metres from the wire and clawed out a neck victory over the closing Lotus Land (Point of Entry), who bested Kir Lord (Jpn) (Lord Kanaloa {Jpn}) by a nose for second. It was another neck back to Travesura in fourth. Meikei Yell (Jpn) (Mikki Yell {Jpn}) was also part of the blanket finish, a neck behind in fifth, one length better than Resistencia.

“Racing from the rear is his usual style so I just concentrated on keeping the horse's rhythm,” said jockey Kyosuke Maruta, who was winning his first Group 1 in 16 seasons in the saddle. “He has never experienced heavy ground before but handled it well. I took him through the inner course with confidence as I did in the Tanzanite S. I was really happy when we were able to break free before the wire.”

“I'm very happy and a bit relieved to have been able to win a Group 1 race, thanks to Naran Huleg,” added trainer Yoshitada Munakata. “Though we would have preferred a better ground, he showed his usual strong charge in the stretch against a strong field.”

Second in the Listed Yukan Fuji Hai Opal S. at Hanshin in October, Naran Huleg took the Tanzanite S. there in December and was third in Chukyo's G3 Silk Road S. on Jan. 30. He went one better going this trip at Nakayama in the G3 Yukan Fuji Sho Ocean S. on Mar. 5, in his most recent trip to the post prior to Sunday's heroics.

The late Gold Allure (Jpn), a former leading sire on the NAR circuit, now has 27 black-type winners to his credit, 12 at the group level. Naran Huleg is his sixth Group 1 winner, and is bred on the same cross as G1 Japan Cup Dirt, and G1 February S. hero Espoir City (Jpn), who is also out of a Brian's Time mare. That sire's daughters have foaled 38 black-type winners, 22 of them group scorers. Other Group 1 winners besides Naran Huleg and Espoir City in that sphere for Brian's Time are Dee Majesty (Jpn) (Deep Impact {Jpn}), Time Flyer (Jpn) (Heart's Cry {Jpn}) and Beat Black (Jpn) (Miscast {Jpn}), all by sons of Sunday Silence.

A winner at both three and four, Kelley's Beauty (Jpn) (Brian's Time) threw Listed Oro Cup winner and G2 Keio Hai Spring Cup-placed Impress Winner (Jpn) (Fusaichi Concorde {Jpn}) as her first foal in 2007. Her produce record currently stands at 10 runners and nine winners, with Naran Huleg the best of the lot. Her filly of 2018, Diamond Canon (Jpn) (Victoire Pisa {Jpn}) has been placed, while her Talismanic (GB) juvenile filly Isa Chil Cute (Jpn) has yet to race. She did not produce a foal last year, but was bred to Discreet Cat for this spring.