Tacher, a True Jack of All Trades 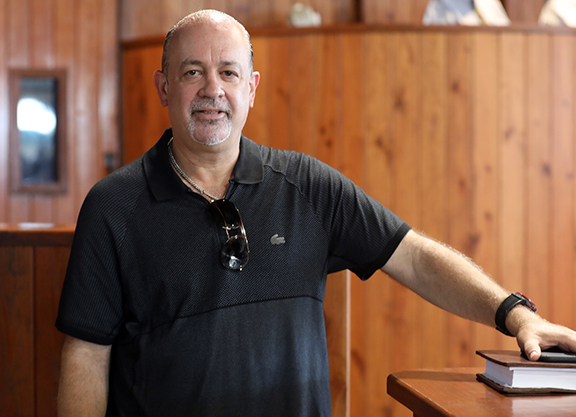 There is not much Marc Tacher hasn't tried his hand at in the horse racing industry. The native of Puerto Rico breeds, buys and races horses; owns part of a racetrack; and pinhooks. He hopes to enjoy more pinhooking success Wednesday as he sends three juveniles through the ring at the Fasig-Tipton Gulfstream Sale.

Growing up in Puerto Rico, Tacher was bit by the racing bug at a young age and made his first investment in the game early in his adult years.

“I got into horse racing early. As a kid, I used to go to the track with my father,” said Tacher, who owns insurance companies around the U.S., but mainly in Miami. “When I was in my twenties I bought a piece of a horse and that is how I got started over 32 years ago.”

Tacher now has 85 horses in training in both Puerto Rico and the United States; operates a breeding program predominantly in the U.S. territory; and owns part of his local racetrack, Hipódromo Camarero.

“I kept on buying horses and, through the years, I was pretty successful at that,” said Tacher. “I raced mostly in Puerto Rico. The opportunity came to buy the racetrack in 2004, but it took like three years to get it done.”

Of all the things he does, Tacher enjoys racing the most.

“I have the biggest stable in Puerto Rico,” he said. “I have been leading owner there for the past five years. In the U.S., I am in second-place in victories in the nation and was third last year [racing as Sonata Stable].”

Tacher continued, “I won the Puerto Rican Triple Crown, which was a nice experience to have. Not many people get to experience that, so that was a good feeling.”

Tacher has also done well with pinhooking. His biggest success in that venture, however, did not come at auction.

“My biggest score didn't go through the ring, but I sold a Distorted Humor colt for $1.5 million that I bought for $60,000,” Tacher said. “I mostly buy to pinhook, but through the months leading up to the juvenile sales, I can change my position or if the horse doesn't bring what I think he is worth, I keep him to race. I don't buy to race, to be honest, I buy to pinhook. Most of what I race are RNAs and I also buy at the 2-year-old sales.”

Three of Tacher's yearling purchases are set to sell Wednesday with de Meric Sales, who he has been using for the past three years. The first to go through the ring will be Hip 81, a filly from the first crop of Practical Joke. The $130,000 KEESEP purchase is out of a half-sister to MGSW Takeover Target (Harlan's Holiday) and SW Ladies' Privilege (Harlan's Holiday).

“She is a nice filly and very forward,” said Tristan de Meric. “These Practical Jokes are really training well and she is one we have liked all year. She is a balanced and good-looking filly.”

“He is a really nice colt with a lot of leg,” de Meric said. “He has been training very well and is a horse we think could do really well at the sale.”

Rounding out the Tacher trio is a colt from the first crop of the late champion Arrogate (Hip 122). The $200,000 FTKOCT acquisition is out of MSW Hero's Amor (Street Hero), who is a full-sister to SW & MGSP Threefiveindia.

“He is a bit immature, but he is very quick and sharp,” Tacher said. “He is not as big as the Nyquist colt, but he is fast and looks like he should do well. He is a very refined colt.”

The Fasig-Tipton Gulfstream Sale will be held Wednesday at Gulfstream Park starting at 2 p.m. and the breeze show is Monday at 9 a.m.