Swiss Skydiver May Run in 1,000 Guineas 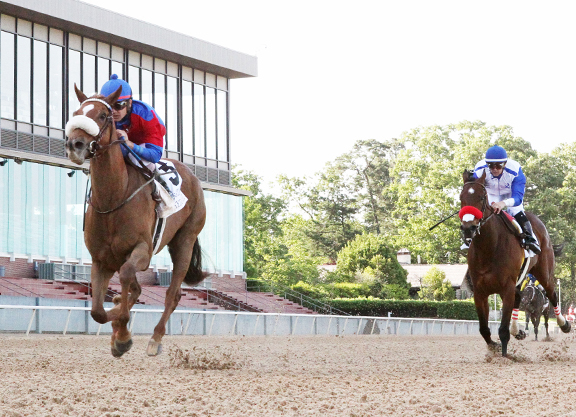 With so few options immediately available for 3-year-old fillies, trainer Ken McPeek may get adventurous with Swiss Skydiver (Daredevil), the winner of Friday's GIII Fantasy S. at Oaklawn. McPeek told the TDN that he is considering running his filly next in the G1 1,000 Guineas in Newmarket, England.

“We're going to nominate her to the 1,000 Guineas and do our due diligence,” McPeek said. “She might be at a competitive advantage because she has been running.  It would be a historic trip. I don't think anybody has ever done it. She's obviously freakishly talented and I don't think turf will be an issue. I think she will like it. Good horses can run on most surfaces.”

Racing is currently shut down in Great Britain because of the coronavirus, but the British Horseracing Authority has said that it hopes to resume flat racing behind closed doors in May. The 1,000 Guineas is scheduled to be run June 6.

McPeek said the decision to go to England may ultimately come down to how feasible it is.

“It is more a logistics issue,” he said. “We will try to figure out travel and all the things we'll have to deal with the COVID-19 situation. How do we get her there, how do we get her settled in once there and what do we do about staffing?”

McPeek said that he and owner Peter Callahan would like to win a Grade I or Group 1 race with their filly, and may not have an opportunity to do so any time in the near future in the U.S. If they do go in the 1,000 Guineas, McPeek said the goal would still be to run in the GI Kentucky Oaks Sept. 4 at Churchill Downs.

“She came out of the race great,” he said. “That's no problem. She's pretty much push button at this stage. If we do go over for the 1,000 Guineas we would have plenty of time to have another prep for the Kentucky Oaks. Who's to say we can't have our cake and eat it too? We would expand her horizons if she can win on grass.”

McPeek, who has started a handful of horses in England, came close to pulling off an upset in his first trip there. He ran Hard Buck (Brz) (Spend a Buck) in the 2004 G1 King George VI and Queen Elizabeth Diamond S. and the horse finished second at 33-1.

“I was going over there before Wesley [Ward] started doing it,” he said. “I know my way around over there, that's not a problem.”

Swiss Skydiver wasn't on anyone's radar until she pulled off the upset at 9-1 to win GII Gulfstream Park Oaks Mar. 28. She was again overlooked by the bettors in the Fantasy, going off at 16-1. In what turned out to be a two-horse race, Swiss Skydiver edged past 4-5 favorite Venetian Harbor (Munnings) in mid-stretch in the Fantasy and drew off to win by 2 1/2 lengths.

“The difference has been the two turns,” McPeek said. “I was really frustrated when she was a 2-year-old because I really felt she was a filly that had Breeders' Cup type talent. It just seemed like every time I entered in a two-turn race it didn't go or she got excluded. Nothing really fell in place as a 2-year-old. The two turns has made all the difference. She really needed to stretch out where she could get into a rhythm.”

McPeek picked the horse out for Callahan at the 2018 Keeneland September sale, paying only $35,000 for a future stakes winner.

“Sometimes I get lucky,” McPeek said. “I work these things like I have always worked them. I don't get enamored with the page so much as I do the body. She has a great body on her, an unbelievable hip on her. That stallion, they better get his butt back here. He's throwing some serious speed.”

Daredevil is standing at stud in Turkey. In addition to Swiss Skydiver, he is the sire of Shedaresthedevil, who was third in the Fantasy.