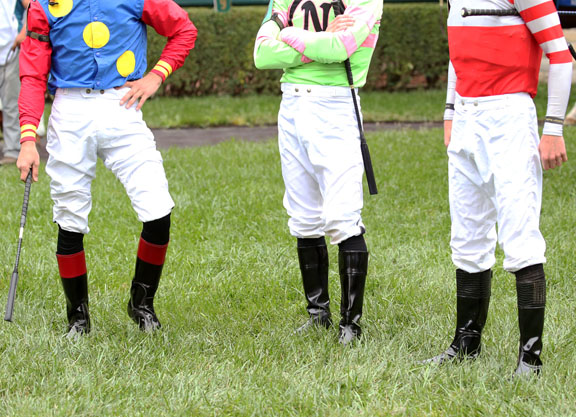 A surge in positive Coronavirus tests among jockeys was met on Tuesday with a flurry of new movement-related restrictions at Thoroughbred tracks from coast to coast in an effort to keep the pandemic from spreading further.

For the industry in general, any sizable spike in COVID-19 positives among participants will almost certainly trigger another wave of racetrack shutdowns. But for jockeys specifically, the balance of maintaining safety under pandemic precautions often comes down to treading a fine line between protecting one's health versus protecting one's livelihood.

Since the end of June, jockeys Luis Saez, Martin Garcia, Victor Espinoza, Flavien Prat, Gerard Melancon and Eduard Rojas Fernandez have all been added to the fast-growing list of North American riders who have publicly acknowledged positive tests for COVID-19.

On Tuesday morning those reinsmen were joined by Florent Geroux, who posted on Twitter and subsequently told TDN he got a positive Coronavirus test on July 13 and is symptom-free, but now self-quarantining at home.

Los Alamitos Race Course, which raced from June 26 through July 5, was a common-denominator site among at least five of those positives, including Saez, Garcia, Espinoza and Prat, who all rode at the southern California track July 4.

Some of those virus-positive jockeys then collectively went on to ride at Belmont Park, Del Mar Thoroughbred Club, Keeneland Race Course, Indiana Grand and Prairie Meadows before learning of their positive tests.

The New York Racing Association (NYRA), which is scheduled to open the Saratoga Race Course meet on Thursday, weighed in on Tuesday with the most prominent change in protocols in response to the COVID-19 uptick.

In a press release, NYRA announced that “Until further notice, Saratoga Race Course will be closed to out-of-town jockeys. In addition, any member of the regular NYRA jockey colony who travels to ride at any other racetrack will not be permitted to return to Saratoga Race Course.”

On the opposite coast, at Del Mar, most of the local jockey colony underwent newly required COVID-19 testing on Tuesday morning, according to Darrell Haire, the western regional manager of the Jockeys' Guild.

Haire told TDN there are ongoing “heavy discussions” between jockeys and track management about additional protocol adjustments that could be put in place before the next day of racing July 17.

“It's so fluid right now,” Terence Meyocks, the president and chief executive officer of the Jockeys' Guild, told TDN. “Not only in New York, but the rest of the country with what's developed in the last 72 hours. We thought we had protocols in place, but then there were more positives.”

Meyocks said that the non-uniform handling of Coronavirus protocols from track to track is yet another example of how the industry's fragmented, state-by-state regulatory structure complicates an already complex and dangerous situation.

“As I've said before, our industry doesn't work well together,” Meyocks said. “And this is one case where [protocols] need to work and we've all got to be on the same page. It's not only the jocks, but the backside, the grooms, the horsemen, and everybody back there. It's very difficult with people close together.

“As we're finding out, jocks are very essential,” Meyocks said. “And at some tracks, they don't think so. Again, there's no leadership in our industry to say you've got to do X, Y, and Z. That's a shame, and that's why we're at where we're at today.

“We need minimal standards,” Meyocks said. “It doesn't have to be the extent that Santa Anita went through [with jockeys mandated to live on-site in trailers during racing days]. But there have to be minimum standards. We've been working on this since March. I don't know if people just got lax or just didn't think it was needed.

“Nobody should be allowed in the jocks' room [without having passed standardized protocols],” Meyocks said. “Not only for jockeys, but the clerk of scales, the assistant clerk of scales, the [silks] person. Everybody in the jocks' room should be tested and [kept] spread apart. At Gulfstream, they had seven different places [for personnel]. Keeneland had six the other day.”

Meyocks continued: “We talk about social distancing. Spread out the room–no steam room, no sauna. And tracks haven't done it. I'm not going to name names [of non-compliant tracks], but you just can't do it that way. There have to be minimum standards if they want to continue racing.”

Haire said that on the SoCal circuit, where the riders have shifted from Santa Anita to Los Al to Del Mar over the course of about a month, the protocols for riders and testing were not standardized.

Haire said at Santa Anita, jockeys were mandated to be tested every Wednesday. There was no testing at the Los Al meet, he said, just required masking and social distancing. At Del Mar, Haire said Coronavirus testing for jockeys just began several days ago after the meet had already started July 10 without that requirement.

“As we speak, the riders were just tested at Del Mar, so they're taking the precautions now because of what happened,” Haire said Tuesday. “And right now, the riders, for the last two mornings, haven't been getting on horses at Del Mar. That was a policy from Del Mar, and we've been back and forth working closely with them to make it as safe as possible for the riders.”

In New York, the Saratoga restrictions are aimed at proactively warding off virus penetration into the riding colony before the meet begins.

“Any jockey that rides at a racetrack outside of Saratoga beginning Thursday, July 16, will be considered an out-of-town jockey and will not be permitted at Saratoga Race Course,” the release explained.

“These measures prioritize the health and safety of the jockeys competing in New York, and are designed to combat the spread of COVID-19,” NYRA president and CEO Dave O'Rourke said. “Unfortunately, the restrictive travel policies implemented today have become necessary as cases continue to rise in states across the country.”

According to the release, the 22 active jockeys currently listed in the first condition book constitute the “regular NYRA jockey colony” that form the basis of the restrictions (read the list here).

In determining return-to-ride protocols, the release stated “NYRA will follow current Centers for Disease Control and New York State Health Department guidance when determining the return of a jockey who has tested positive for COVID-19. This process will include a period of quarantine determined by the severity of the individual case followed by a series of diagnostic tests to rule out ongoing infection. NYRA will consider allowing a jockey to resume racing or training activities on NYRA property only when his or her physician has provided clearance to do so.”

In response to the new Saratoga protocols, Meyocks told TDN, “I wouldn't say we totally endorsed it, but at the same time we accepted that it was something that needed to be done. We had a conversation [with NYRA on Monday] night, and under the current circumstances we accept it.”

The NYRA release stated that the Saratoga jockeys' quarters “have been substantially altered to provide maximum social distancing and reduce density” and that all common areas “have been closed and will remain closed through the end of the meet.

“Jockeys and valets are not permitted access to the barn area. In order to work a horse in the morning, the jockey must meet the horse in the paddock and can then proceed to the main track,” the release continued.

With regard to steeplechase races at Saratoga, NYRA explained that the separate colony of jump riders “will be completely isolated from the regular NYRA jockey colony in a physically separate location. Following that day's steeplechase race, which will be carded as race one, the steeplechase jockeys will depart the property.”

In addition to the protocols specific to jockeys, the NYRA release stated that “All personnel working at Saratoga Race Course in any capacity are required by NYRA to produce a negative COVID-19 test in order to access the property. This policy is inclusive of jockeys, valets, NYRA employees, trainers and their staff, outside vendors and credentialed media.”

Beyond the immediate health aspects of the NYRA restrictions, there will be some near-term disruptions to the business of booking mounts.

Ortiz's agent, Steve Rushing, told TDN that his in-demand rider would instead remain at Saratoga.

“It's very disappointing that we're not going to be able to go out of town to ride a very nice and promising 3-year-old,” Rushing said. “But unfortunately, we can't miss the entire Saratoga meet [to do so]. I think to protect our business, but more importantly, the health of all the jockeys, I think every track should take the same precautions and protocols and do the same thing. It's wise that if you have one jockey colony with a few positives, at least it will be contained to that one jockey colony. It's not going to spread over multiple tracks. So I think [NYRA's policy] is absolutely the right thing to do to try and contain this.”

If the sport soon defaults to a “pick your track and stay there” mandate for jockeys, the question of who gets to ride which lucrative mounts in the Sep. 5 GI Kentucky Derby at Churchill Downs becomes the burning question.

“The way this pandemic is going, it changes every hour, so to try to predict what's going to happen in seven weeks is obviously impossible,” Rushing said. “We'll just have to deal with whatever decision they come up with. But I think it's very possible that [jockeys getting shut out of Derby mounts] could happen.”

Meyocks said the pandemic situation is too slippery to try and grasp what might happen with Derby riding privileges.

“To be determined,” Meyocks said when asked what an early-September scenario might look like. “That will be revisited. [Plans like the one at Saratoga] are to get us through right now.”