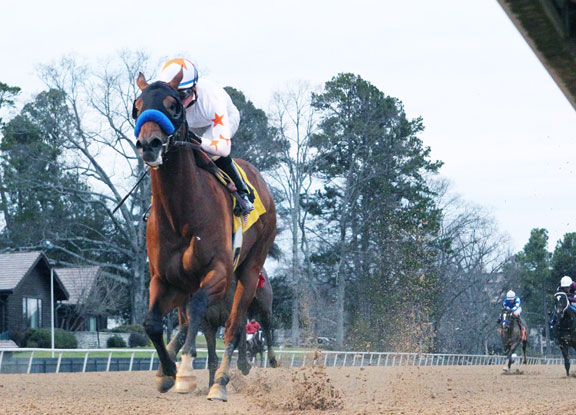 Mourinho, named a 'TDN Rising Star' after an impressive debut at Santa Anita, rebounded from a pair of short-priced defeats to take the Smarty Jones S. wire-to-wire at Oaklawn Park Monday, continuing an unprecedented run of success for Bob Baffert trained 3-year-olds at the Hot Springs oval.

The bay, who sold for just $30,000 to William Danny Pate as a Keeneland September yearling, was bought by Phoenix Thoroughbred III for $625,000 at last year's OBS March sale after breezing a quarter-mile in :20 1/5. Scoring by 4 1/4 lengths in his Sept. 30 unveiling, Mourinho ran second at 3-10 after dueling on a fast pace in the Speakeasy S. in Arcadia Oct. 15. Favored again in the GIII Bob Hope S. while removing blinkers Nov. 11 at Del Mar, he chased returning Springboard Mile S. hero Greyvitos (Malibu Moon) and settled for the runner-up spot once again.

Hammered down to 3-5 with the shades back on in this first two-turn test, Mourinho broke alertly and, after turning back an early bid for the lead by Tap Daddy (Scat Daddy), showed the way in the clear through splits of :23.33 and :48.09. The scratched-down quintet was within three lengths of each other heading into the far turn, where Drayden Van Dyke put the pedal to the metal and started to open up on the favorite.

Springboard place runner and second choice Combatant (Scat Daddy) was in a bit tight at the rail before angling out into the clear three-eighths from home. By that time, however, Mourinho had built up a five-length advantage, and Combatant was only slightly able to eat into that cushion in the stretch, with the front-runner coasting home a bit more than three lengths to the good. Combatant was well clear for place honors.

“He's a horse we get to relax in the morning, so the blinkers I think helped him stay focused and it benefitted him,” said Van Dyke after the race. “Bob said, 'We're the fastest horse in the race, so get the lead and go from there,' and luckily it worked out.”

For his win, Mourinho earned 10 points in the Road to the Kentucky Derby standings, with the second through fourth finishers picking up four, two and one points respectively. Click for the Equibase.com chart or VIDEO, sponsored by Fasig-Tipton.