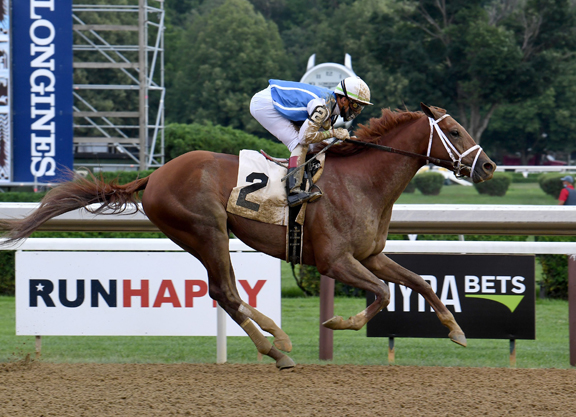 Wertheimer and Frere homebred Happy Saver (Super Saver) made good on a flashy debut last month and handled nine panels at Saratoga like he was just getting going to garner the 'TDN Rising Star' moniker Sunday afternoon. The Todd Pletcher pupil aired by 5 1/2 lengths at first asking going seven furlongs at Belmont June 20, and was even-money against a solid-looking group of winners this time around. He broke alertly, but was out-footed into the first turn and took up a ground-saving spot in third. Ridden along to avoid getting shuffled back into the second bend after a :48.25 half, he looked briefly like he might be coming up empty as Irad Ortiz, Jr. was all over him to get going as noses pointed for home. Happy Saver tipped out wide while figuring out his leads, soon found another gear kicked on with a flourish to inhale Beau Luminarie (I Want Revenge) and canter away a geared-down four-length winner in 1:49.93.

“He's been training great–he's [GI Belmont S. runner-up and GI Haskell S. third] Dr Post (Quality Road)'s workmate and they've been working head and head, so we had confidence that his first out [effort] was legitimate,” Pletcher told Acacia Courtney on the Saratoga Live broadcast. “You're always a little concerned when you're stretching out off of one race to a mile and an eighth, but he'd trained really well and he's got a great personality–he's very relaxed. I got a little worried around the first turn, it got a little crowded and we weren't exactly where we thought we'd be, but he seemed settled and I was really impressed with his last eighth of a mile.”

While Pletcher acknowledged that the GI Runhappy Travers S. in two weeks would likely come up too quickly, he mentioned the GII Jim Dandy S. Sept. 5 as a possible next spot for Happy Saver.

The winner's dam Happy Week (Distorted Humor) was a MSP sprinter for these connections and was disqualified from a third-place run in the 2011 GII Shuvee H. over a one-turn mile. She produced a Candy Ride (Arg) filly in 2019 and sold for $30,000 to John Ropes at last  year's Keeneland November sale carrying a full-sister to Happy Saver. Happy Saver's third dam is Weekend Surprise (Secretariat), best known as the dam of A.P. Indy.