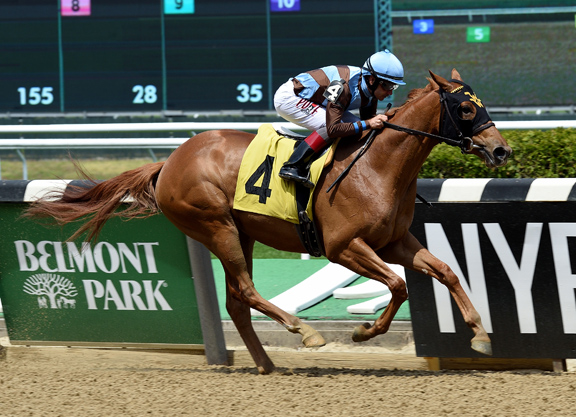 11th-GP, $46K, Alw, N1X, 3yo/up, f/m, 6f, 5:57 p.m. ET
AURELIA GARLAND (Constitution) was the first of what would be 29 winners from her phenom sire's first crop last term, and she'll finally look to pick up where she left off here, almost exactly a year since her head-turning unveiling. The $185,000 Fasig-Tipton Saratoga grad aired by five lengths at Belmont last May for Wesley Ward to garner the 'TDN Rising Star' distinction, but has since been transferred to Rodolphe Brisset. Third in her debut race was Sweet Melania (American Pharoah), winner of the GII Jessamine S. and third in the GI Breeders' Cup Juvenile Fillies Turf last season. Aurelia Garland is a granddaughter of Grade II-winning juvenile Westerly Breeze (Gone West) and a half to Diamondsandpearls (Congrats), the $1.7-million OBSMAR '17 sale topper who also earned 'Rising Stardom' in her first start of a three-race career.TJCIS PPs