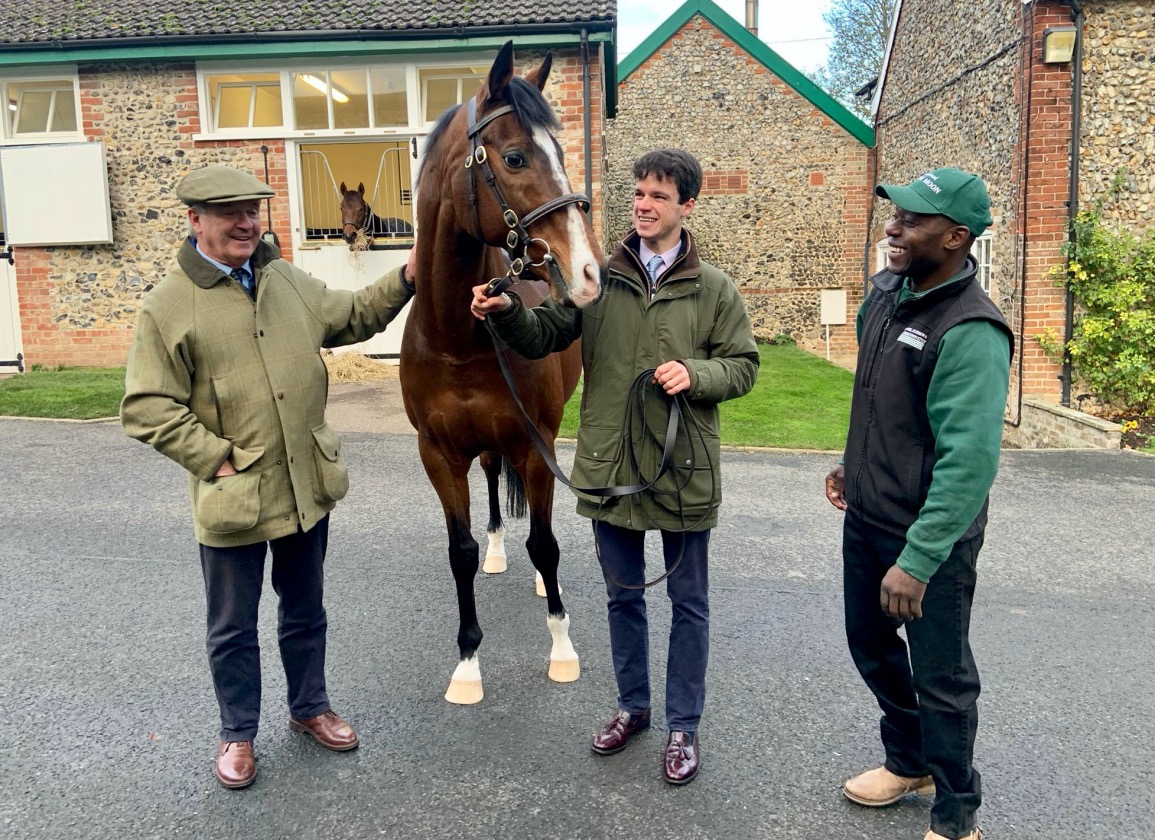 NEWMARKET, UK–There's still some important business to be done in the sale ring but the Sunday between the foal sale and the mare sale at Tattersalls always has something of an end-of-term feel to it as breeders tour the local studs to view stallions and sample a range of hot sausage rolls.

First stop on a mini tour for the TDN team, which sadly did not include all the studs, was to Lanwades to see an impeccable quartet. One of the most enjoyable features of Kisten Rausing's traditional December open day is that it invariably includes either the owners of or those closely connected to her sires. Sure enough, this Sunday Sir Percy's owners Victoria and Anthony Pakenham were there along with the Derby winner's former trainer Marcus Tregoning and his son George, who posed for the lovely accompanying photograph taken by Nancy Sexton. Sir Percy is now the veteran of the Lanwades ranks at the age of 18 but looked a picture in the winter sunshine with his devoted handler Peter Manuel.

Heike Bischoff and Niko Lafrentz, the proud owner/breeders of the German Derby winner Sea The Moon (Ger), whose popularity seems to grow with each passing season, were also on hand. The Gestut Gorlsdorf owners have enjoyed some good foal sale results of late, including topping the Goffs November Sale with a Frankel (GB) half-sister to Sea The Moon.

The Niarchos family's racing manager Alan Cooper was also at Lanwades and was keenly videoing the French Derby winner Study Of Man (Fr), who has let down into a magnificent specimen. A reminder of the greatness of his sire Deep Impact (Jpn) had been provided that same morning by Contrail (Jpn), who brought the curtain down on a glittering career with victory in the Japan Cup. European breeders are fortunate to have access to his bloodline via Saxon Warrior at Coolmore in Ireland and Study Of Man, a grandson of the great Miesque, in Newmarket.

Sir Mark Prescott, who must be the apple of Kirsten Rausing's eye, having trained Alpinista (GB) to emulate her grandam Albanova (GB) by winning three German Group 1 races this season, was one of a number of trainers at the Lanwades parade, along with Sir Michael Stoute, Jane Chapple-Hyam, Rae Guest, David Simcock and George Margarson. Emma Balding was also in attendance and is an astute breeder in her own right as well as being the mother of Andrew, who trained Sandrine (GB) to win the G2 Albany S. and G2 Duchess of Cambridge S. in the Lanwades colours this season. The filly is an exciting Classic prospect next season for her imposing sire Bobby's Kitten, the GI Breeders' Cup Turf Sprint winner and son of Kitten's Joy.

That sireline has of course been seen to great effect on these shores via the late Roaring Lion and more recently by 2000 Guineas winner Kameko, who is another sire well worth a visit at Longholes Stud this week with a year at stud now under his belt. Price Bell Jr, who stands another top-class son of Kitten's Joy in Oscar Performance at Mill Ridge Farm in Kentucky, had come to check out the opposition at Longholes and was a welcome visitor along with Dr Chandler.

The handsome dark brown Kameko led a trio of sires from Tweenhills who are in Newmarket for a temporary holiday. One who should feel right at home in the town is Lightning Spear (GB), who spent three of his six seasons in training in Newmarket under the excellent care of David and Jenny Simcock. He always appeared to be a laidback individual out on the Heath in the mornings and that lovely temperament has not deserted him in his second career.

Havana Gold (Ire), one of the faster sons of Teofilo (Ire) who already has his own Group 1-winning son Havana Grey (GB) at stud at Whitsbury Manor, completed the trio. For those trying to breed a durable, early 2-year-old, it's worth remembering that Havana Gold's son Chipotle (GB) won the Brocklesby on the first day of the 2021 season and, eight starts later, completed his year with a win the listed Two-Year-Old Trophy, having also won at Royal Ascot.

Longholes is also hosting the Newsells Park Stud stallion Without Parole (GB) this week and the elegant Group 1-winning son of Frankel (GB) is another who must be seen in the flesh as he is about to embark on his second season at stud.

There is also a collaborative approach between stallion masters at the National Stud, which, along with its own stallions, is temporarily home to Whitsbury Manor Stud's son of Scat Daddy, the statuesque Sergei Prokofiev, and A'Ali (Ire), who has recently retired to Meadow Farm Stud in Marlborough, a new stallion base owned by well-known equine vet Rob Dallas and his wife Catherine. A'Ali, a compact son of the late Society Rock (Ire), has a racing profile and physique which will doubtless make him popular with commercial breeders.

Whitsbury Manor and the National Stud have gone into partnership, along with Coolmore and Nick Bradley, to stand Lope Y Fernandez (Ire) in Newmarket. Lope is the operative word for the 4-year-old, who has a long, loose walk and appears to be pretty relaxed about life. The winner of the G3 Round Tower S. as a juvenile, the son of Lope De Vega (Ire) was then third in the Irish 2000 Guineas and placed in three further Group 1 races at three before returning at four to run second to Palace Pier (GB) in the G1 Queen Anne S.

Time Test (GB), one of the emerging success stories of the season for the British stallion scene, will return to the National Stud from New Zealand on Dec. 20 and looks set to have a very busy season in Newmarket.

Breeders in town for the sale this week can also take advantage of visiting the stallions at Juddmonte, Cheveley Park Stud, Shadwell's Beech House Stud and Darley's Dalham Hall Stud. The latter is showing the new recruits Palace Pier (GB) and Space Blues (Ire), who are bound to attract plenty of visitors.

Our thanks to all the studs who have opened their doors, and especially to the stallion handlers for their hard work and patience on a cold day.