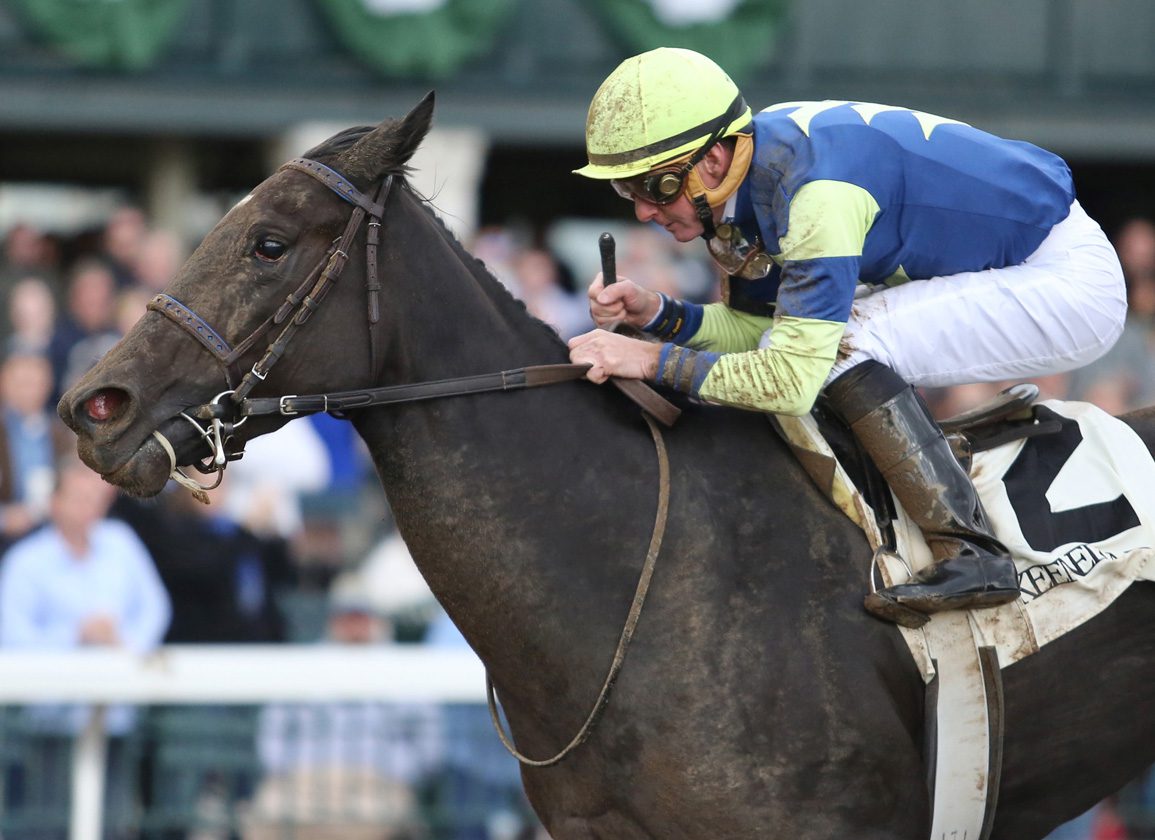 1st-BAQ, $95k, Msw, 2yo, 1m, post time: 1:00 p.m. ET
A well-bred bunch of 2-year-old males gets the Sunday program off to a competitive beginning at Aqueduct. BIG WICKS (Medaglia d'Oro), a $575,000 graduate of last year's Keeneland September sale, is part of an entry that is favored at 2-1 on the morning line and is a son of Sovereign Award-winning 3-year-old filly Leigh Court (Grand Slam), a two-time graded winner for the late Eugene Melnyk who was purchased by Speedway Stables for an even $1 million from the Melnyk dispersal at the 2014 Fasig-Tipton November Sale. Kept in training at five and six, Leigh Court–a half to three full stakes winners–would go on to add the GIII Whimsical S. in 2016. The dark bay faces $1-million KEESEP grad Phelpsy (Into Mischief), fifth on Saratoga debut July 23; and Point Proven (Gun Runner), a $675,000 September purchase who was seventh to 'TDN Rising Star' Disarm (Gun Runner) at the Spa Aug. 6. TJCIS PPs

6th-MTH, $57k, Msw, 2yo, 6f, post time: 2:35 p.m. ET
THAT SUN OF A GUN (Gun Runner) is the latest produce of 14-time winner Suzee Sunrise (Chester House), whose best foal to date is New Jersey-bred Golden Brown (Offlee Wild), winner of the 2018 GIII Kent S. on the turf at Delaware and a six-time stakes winner in state-bred restricted company for earnings of better than $810,000. The mare's less-heralded Sunny Star (Flatter) has punched well above his weight in Hong Kong, where he has won five races and $802,000 while placing in Group 3 company on the turf. Like Golden Brown, That Sun of a Gun is conditioned by Pat McBurney. TJCIS PPs

5th-BAQ, $95k, Msw, 2yo, 1m, post time: 3:03 p.m. ET
The juvenile filly set gets their chance going the one-turn mile, a group headed–on pedigree, at a minimum–by Spendthrift's ANISTON (Curlin), who isn't here just to make 'friends.' A $550,000 acquisition at KEESEP this time last year, the Apr. 28 foal is chestnut in color the same as her 'TDN Rising Star' full-sister Souper Sensational, winner of the 2011 GIII Victory Ride S. and runner-up in the GI Test S. while also proving her versatility with a near-miss second in this year's GII Royal North S. sprinting on the turf at Woodbine. Dam Kateri (Indian Charlie) is an unraced daughter of Grade III winner Sue's Good News (Woodman), the dam of GI Odgen Phipps H. victress Tiz Miz Sue (Tiznow) and granddam of GSP Serein (Uncle Mo) and MSP Surfer Dude (Curlin). Sue's Good News also dropped Breeders' Cup Juvenile Turf Sprint winner Bulletin (City Zip). Tangential (Justify), a half-sister to GSP Carried Interest (Henny Hughes), is out of a full-sister to the stakes-producing MGSW/GISP Allamerican Bertie (Quiet American); and a half to MGSW & GISP Hurricane Bertie (Storm Boot). The May 24 foal, an $80,000 KEESEP grad, made $450,000 at OBS April this year after breezing a furlong in :10 1/5. TJCIS PPs

7th-CD, $120k, Msw, 2yo, f, 6 1/2f, post time: 3:50 p.m. ET
PRETTY MISCHIEVOUS (Into Mischief) is the second foal to the races out of Pretty City Dancer (Tapit), who shared the spoils with her sire's daughter Sweet Loretta in the 2016 GI Spinaway S. at Saratoga. A half-sister to GISW Lear's Princess (Lear Fan)–who would have been best-backed behind Rachel Alexandra (Medaglia d'Oro) in the 2007 GI Kentucky Oaks before scratching from the race–Pretty City Dancer was acquired by Stroud Coleman Bloodstock on behalf of Godolphin for $3.5 million in foal to Medaglia d'Oro at the 2018 Fasig-Tipton November Sale. TJCIS PPs