Sunday Insights: Hoping For a Perfect '10' 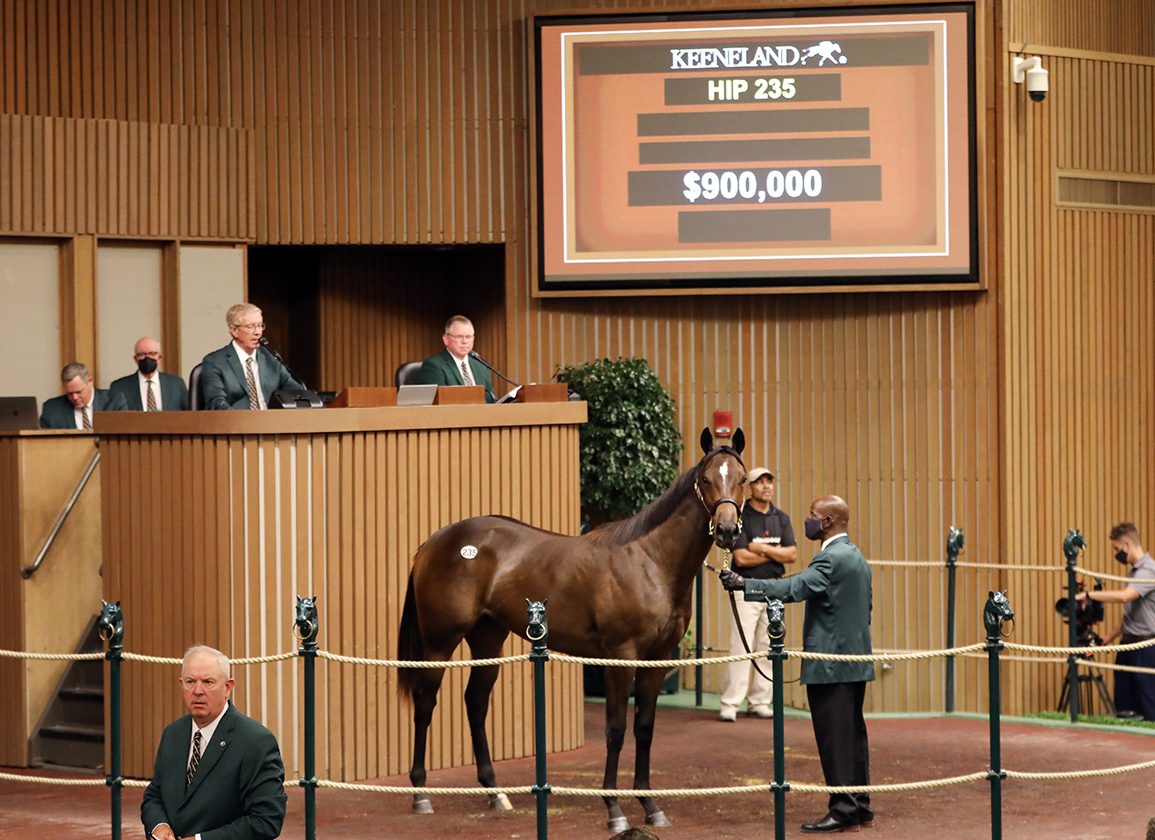 4th-CD, $120k, Msw, 2yo, f, 6f, post time: 2:30 p.m. ET
BO DEREK (Speightstown) must have ticked all the proverbial boxes at last year's Keeneland September sale, as she was acquired by WinStar Farm and Siena Farm for $900,000, the priciest of 42 (53 ring) of her Eclipse Award and GI Breeders' Cup Sprint-winning sire's yearlings that were reported as sold in 2021. And the family behind her is extremely live. The Mar. 12 foal is the first from Wildwood Rose (Ire) (Galileo {Ire}), a half-sister to the late GI Besilu Stables Florida Derby hero and 'TDN Rising Star' Materiality (Afleet Alex) and to GSW/MGISP My Miss Sophia (Unbridled's Song), whose 'Rising Star' son Annapolis (War Front) will have his fair share of supporters in next weekend's GI Breeders' Cup Mile off his victory in the GI Coolmore Turf Mile S. The Into Mischief yearling half-sister to Bo Derek was hammered down to Whisper Hill Farm for $1.15 million at KEESEP last month. Among the competition is the outposted Tough Legacy (Hard Spun), a sister to GIII Regret S. victress Hard Legacy whose dam Stone Legacy (Birdstone) was the very, very distant runner-up to Rachel Alexandra (Medaglia d'Oro) in the 2009 GI Kentucky Oaks. TJCIS PPs

1st-CD, $120k, Msw, 2yo, 5f, post time: 1:00 p.m. ET
A pair of Into Mischief colts share the spotlight in the 'Stars of Tomorrow I' opener Sunday. TALLADEGA fetched $400,000 at Keeneland November in 2020, one of three of the exceptional stallions 12 foals to achieve that top foal price, and improved into an $850,000 KEESEP yearling for the aforementioned WinStar/Siena partnership. Closely related to GSW Holiday Disguise (Harlan's Holiday) and also a half-brother to three-time stakes winner Midnight Disguise (Midnight Lute) and GI Del Mar Debutante runner-up Forest Caraway (Bodemeister), the bay is out of a winning half-sister to GSW millionaire Naughty New Yorker (Quiet American). Midnight Pranks, a $500,000 KEESEP acquisition, is out of the unraced Midnight Girl (Drosselmeyer), who was purchased by Twin Hopes Farm for $300,000 with the Into Mischief colt in utero at Fasig-Tipton November in 2019. The mare is a half-sister to dual Grade I winner Midnight Lucky (Midnight Lute) while the deeper female family includes GISW Hookedonthefeelin (Citidancer) and her Grade I-winning offspring Pussycat Doll (Real Quiet) and Jimmy Creed (Distorted Humor). TJCIS PPs

7th-CD, $120k, Msw, 2yo, 6f, post time: 4:01 p.m. ET
The cleverly named GORDY'S LABEL (Mo Town) was the second-dearest first-crop yearling for this sire (by Uncle Mo) when John Ballantyne's NBS Stables went to $300,000 at last year's Fasig-Tipton Saratoga Sale. The dark bay was also the gold medal winner among Mo Town's first foals to go through the ring at $185,000 at KEENOV in 2020. A half-brother to SW Just Read It (Constitution), the Jan. 18 foal is out of a full-sister to SW & GSP Pool Winner (Broken Vow) and to MSP Sounds of the City (Street Cry {Ire}), the dam of MGSW & MGISP Venetian Harbor (Munnings). TJCIS PPs

6th-SA, $61k, Msw, 2yo, 6 1/2f, post time: 6:31 p.m. ET
FORT WARREN (Curlin) has the fence for this career debut and most recently worked six furlongs from the gate in 1:12.80 Oct. 24, the third-best of the morning behind a couple of 'TDN Rising Star' stablemates named Taiba (Gun Runner) and Messier (Empire Maker), who went in 1:11.40. The Feb. 11 foal is the lone listed produce for his SW/GSP dam La Appassionata (Bernardini), a full-sister to GSW Wilburn and a half to Grade II-winning juvenile Beethoven (Sky Mesa) and to the dam of GSW Moonlight d'Oro (Medaglia d'Oro). Fort Warren was a $550,000 KEESEP graduate. Drawn just to his outside is Earnhardt homebred Texthelegend (Justify), whose dam Life Blessings (Tapit) is a daughter of the couple's two-time Eclipse Award and five-time Grade I winner Indian Blessing (Indian Charlie). A $100,000 purchase out of the 2021 Fasig-Tipton July Sale, Habeas (Tapwrit) fetched $450,000 at this year's OBS April Sale (:21 flat), the most-expensive of 39 juveniles (45 ring) from the first crop of the Gainesway stallion. The gray is out of a half to GI Spinaway S. winner So Many Ways (Sightseeing). TJCIS PPs