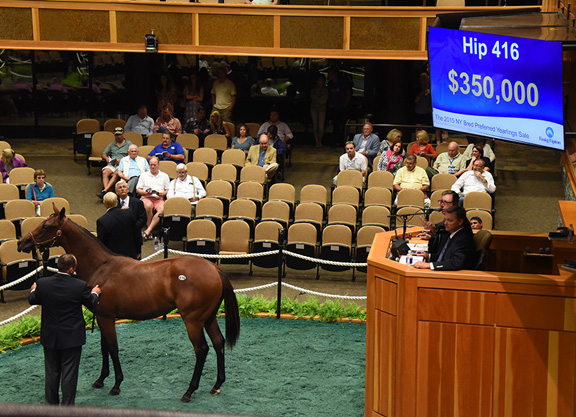 “It was another good horse sale this evening,” said Fasig-Tipton President Boyd Browning. “It's always nice to see the average up, the gross up and the buy-back rate down. There was a little slippage in the median, but it's hard to compare the median from one night to another.”

The top price at last year's auction–$270,000–was bettered three times during Saturday's session, with Vivien Malloy and Lady Sheila Stable teaming up to buy a filly by Tiznow (hip 416) for top price of $350,000. In all, eight yearlings sold for $200,000 or more during the session, equaling the two-day total of a year ago.

“There was a very solid marketplace,” Browning continued. “There was very, very competitive bidding, especially for those offerings who were perceived to have good conformation and pedigree and vetted well. The horses that didn't tick the boxes–there is still selectivity in the marketplace. There is not a buyer for every horse unless every horse is of sufficient quality. But all in all, it was a very solid sale, a very good start to the New York-bred sale. It's remarkable when you consider the growth and the progress that has been achieved in this marketplace over the last five years. It was a great start and we hope to follow it up with a strong finish tomorrow.'

Sunday's final session of the two-day auction gets underway at 7 p.m.

Malloy Teams Up on Tiznow Filly…

New York stalwart Vivien Malloy teamed up with Sheila Rosenblum's Lady Sheila Stable to take home the top lot at Saturday's opening session of the Fasig-Tipton New York-bred Preferred Yearlings sale, going to $350,000 for a daughter of Tiznow. Out of Grade I winner Acey Deucey (Abaginone), hip 416 is a half-sister to multiple stakes winner Preachintothedevil (Pulpit). Consigned by Summerfield, the yearling was bred by Stone Bridge Farm.

“She was a beautiful filly from a wonderful family,” said Malloy, who bid alongside bloodstock agent Mike McMahon. “She is probably a two-turn filly. And she's a New York-bred. So everything was good.”

Linda Rice will train the yearling.

“Lady Sheila is going to be a 50% owner of the horse,” McMahon explained. “Linda Rice and I bought her together. We picked her out and worked on the whole thing together. And the two ladies let us buy the sale topper.”

Malloy, who owns Edition Farm in Hyde Park, NY, admitted she was already looking ahead to the yearling joining her broodmare band down the line.

“We were pricing empty, not even bred, and she would be worth a lot,” Malloy said.

Malloy acknowledged competition for New York-breds has gotten fierce, but she hopes to take advantage of that during Sunday's second session of the auction.

“I remember a trainer of mine said, 'You better step up, Vivien, because they are really getting good,” Malloy recalled. “I am selling Sunday, so I hope I am as lucky as somebody else was tonight.”

Maggie Seidman, sitting alongside bloodstock agent Mike McMahon, went to $300,000 to secure a filly from the first crop of multiple Grade I winner To Honor and Serve (Bernardini) during Saturday's opening session of the Fasig-Tipton New York-bred sale.

“She was our top pick for a filly in that price range,” McMahon explained. “So we are very excited about it. Mrs. Seidman has made a real big commitment. She has been in the business for a very long time, but she has decided to play with the big boys now and she is definitely capable of doing that.”

Hip 380, consigned by David Reid's Preferred Equine, is out of stakes winner Tale of a Dream (Tale of the Cat) and is a half to stakes-placed Dynamic Barbie (Roman Ruler). She was purchased for $47,000 at this year's Keeneland January sale.

“We've really liked what we've seen of the To Honor and Serves,” he said. “We did a couple of seasons with him with Gainesway and we were very happy with the foals. He was a sire prospect that we really thought was a top three in his crop. We wanted to buy one, so we picked out one that we really liked.”

Asked what he liked about the yearling, McMahon smiled, “Everything. You don't buy a horse like that and not like everything. I really wish Mark Casse hadn't been so interested in her too because he cost us a lot of money. But good horses bring competition out.”

The sale of the To Honor and Serve filly marked the biggest Thoroughbred success for David Reid's Preferred Equine. Reid, a leading standardbred consignor for the better part of three decades, was making his third appearance at the Fasig-Tipton New York-bred sale Saturday.

“We are very happy with the price, but I'm also very happy with the connections who got her,” Reid commented. “I was really happy with the activity since she came to the sale. As the saying goes, she ticked all the right boxes. She is just a lovely filly from the time she got to the grounds–actually she's been a lovely filly since birth. Her attitude was just terrific through the whole process. Coming into the ring, I was really confident. I thought she stood out. She didn't have one bad show the whole time here.”

Reid, who is a partner in Ice Wine Stable which campaigned Group 1 winner No Nay Never, sold two yearlings at the 2013 New York sale and brought four yearlings to the 2014 sale.

“This is our biggest sale result in Thoroughbreds,” he confirmed. “We are growing slowly, but I have to give a shout-out to Fasig-Tipton and their team. They do a great job and, being in the sales business for 30 years myself, I really appreciate the job they do–it's first class all the way.

Reid restricts his Thoroughbred consignments to the New York-bred sale, explaining, “It's a timing thing, really. I'll sell 500 yearlings this fall for Standardbred sales. But I am really a deep believer that there is an opportunity for people to do both breeds. I don't want to say that I am proof of that, but I think it is doable. It is definitely a different game from the breed, but as far as operation and racing, it's all the same lingo, it's all the same connections with auctioneers and bid spotters. Operationally it's the same, but it's just a different breed and a different clientele.”

A colt by Flatter kicked off early fireworks during Saturday's Fasig-Tipton New York sale when bringing a final bid of $290,000. Seth Klarman of Klaravich Stables signed the ticket on the dark bay yearling as LRK Stable, but declined to comment on the purchase.

“We knew he was quite nice obviously,” Winter Quarter's Ferran Robinson said. “He was one of those that you don't quite know what you have until you're here on the grounds and realize that you have a man among boys. We felt pretty good that we would get around $200,000 and we are thrilled with $290,000. He's just a fantastic colt. He's a particularly good specimen for this sale in particular. I was really impressed with his mind the whole time. I thought he handled himself well. He showed well every time. He never got tired and by the end you felt really good with what you have. And we felt really confident going in the ring.”

Winter Quarter had success with another son of Flatter Saturday night when LRK Stable purchased hip 345 for $150,000. Bred by Waterville Lake Stables, the dark bay is out of stakes-placed Santa Croce (Saint Ballado).

Bloodstock agent Mike Ryan purchased hip 351, a daughter of Lookin at Lucky, for $255,000 Saturday at Fasig-Tipton. Ryan was bidding on behalf of a new client, who asked not to be identified.

“He's a young guy who has never owned a horse before,” Ryan explained of the Florida owner. “I took him around and showed him some of the better ones and this filly was in our top three tonight. There are a couple of really nice ones coming up later and I told him we have to swing hard for this one.”

Of his new client, Ryan added, “He's brand new and would rather keep it confidential. He's a young guy and he wants to get in the game. I told him, it's a five-year program. If you want to do it right, you can't just come in one year–you have to give it a chance to grow. His wife grew up in Saratoga and they've been coming to the races for years and he said he wanted a nice New York-bred. He wanted some action.”

“She was a well-grown, very, very solid filly,” said Ryan. “She's a beautiful-looking filly. But her frame of mind was unbelievable. The good ones have class factor and she had that.”

Another Hard Spun for Centennial…

Centennial Farms, which campaigns Grade I winner Wicked Strong (Hard Spun), acquired another son of the same stallion when going to $200,000 for hip 338. Consigned by Bluewater Sales, the yearling is out of Ruly (A.P. Indy), a half-sister to multiple Grade I winner Questing (GB) (Hard Spun).

“Of course we liked him being by Hard Spun,” Centennial President Don Little smiled when asked about the yearling's appeal. “He is sort of unique in this sale–he has more of a Kentucky-type pedigree. And you know the cross works because of Questing under the second dam. He fits the mold of what we're trying to do. He has a Classic-type pedigree. He's a big, strong individual. He looks like he can get a Classic distance.”

Little, who said he got shut out of the Saratoga Select sale earlier in the week, was making his first shopping foray at the New York sale.

“We're here in Saratoga, so it doesn't hurt to look,” Little explained. “The select sale was very, very strong–we bid on three that we didn't get. We weren't really expecting to find anything at this sale, but we were lucky to find him and get him for the price that we paid for him. I think the type of horse that we're looking for, in [Keeneland] September–if we're looking to buy five horses–it's going to be a little bit difficult to get five because I think that price point will have to come up 10% or 15% to get that type of horse.”

Mike McMahon had a busy night during Saturday's session of the Fasig-Tipton New York-bred sale, facilitating in the purchase of the evening's top two lots. A little more under the radar, McMahon enjoyed an impressive pinhooking score when hip 362, a son of Here Comes Ben, sold for $175,000 to Midwest Thoroughbreds. McMahon had purchased the youngster for $20,000 at last fall's Fasig-Tipton Saratoga Mixed Sale.

“He was always a great mover,” McMahon said of the dark bay, who was consigned Saturday by Hunter Valley Farm. “He was scopey enough, but he had nice, balanced muscle and there wasn't much I didn't like about him.”

Of the colt's bargain price tag, McMahon added, “The October market hasn't really been discovered by the mainstream pinhooking group yet. So it was a fortunate thing that I was able to get him.”

A few hips before the Here Comes Ben colt, McMahon sold a homebred son of Artie Schiller (hip 348) for $170,000 to Niall Brennan under his McMahon of Saratoga Thoroughbreds banner.

“It's a very strong market,” McMahon, who grew up in the New York Thoroughbred breeding industry, acknowledged. “Where this market came from when I was a child to now, is just an unbelievable turn. The pavilion and the sales grounds have been redone and this is just a great thing that Fasig-Tipton has done for New York. The way the purses are and with more people making money, there are more people coming to buy New York-breds.”