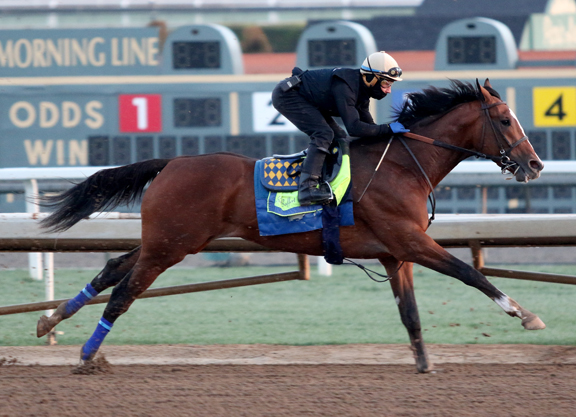 Hall of Famer Bob Baffert sends out two of his (at least) four serious GI Kentucky Derby contenders in a short but stacked running of the GII San Felipe S. at Santa Anita Saturday. Favored at 6-5 on the morning line, Authentic (Into Mischief) was last seen greenly taking the GIII Sham S. here by 7 3/4 lengths over stablemate Azul Coast (Super Saver), who came back to snag the El Camino Real Derby. A $350,000 KEESEP yearling purchase by the powerhouse, stallion-making syndicate of SF Racing, Starlight, Madaket, et al, Authentic prepped for this with a solo six-furlong bullet breeze in 1:12.80 on Monday (XBTV Video).

Despite a slightly more decorated CV at this point, Albaugh Family Stables and Spendthrift’s Thousand Words (Pioneerof the Nile) is second choice behind his stablemate at 9-5 on the line. The $1-million KEESEP grad has done nothing but win in gritty fashion in three tries, but perhaps hasn’t yet displayed the brilliance that Authentic or fellow Baffert-trained sophomores Charlatan (Speightstown) or Nadal (Blame) have. A half-length debut graduate sprinting here Oct. 26, he bested GI Breeders’ Cup Juvenile runner-up Anneau d’Or (Medaglia d’Oro) by a neck in the Dec. 7 GII Los Alamitos Futurity and most recently scored by 3/4 of a length in the track-and-trip GIII Robert B. Lewis S. Feb. 1.

Honor A. P. (Honor Code), an $850,000 Fasig-Tipton Saratoga grad himself, makes his much-anticipated return to the races after airing by 5 1/4 lengths on the stretch-out here Oct. 13. Second that day was Tizamagician (Tiznow), who broke through three starts later before finishing fourth in the Bob Lewis.

It’s not often that the 2-year-old champion would be the fourth choice on the morning line in a March Derby prep, but that’s the case with Storm the Court (Court Vision). The Peter Eurton pupil was a head-scratching, 45-1 winner of the year-end championship event here Nov. 1, but was fourth behind aforementioned ‘TDN Rising Star’ Nadal in the GII San Vicente S. over seven panels here Feb. 9.