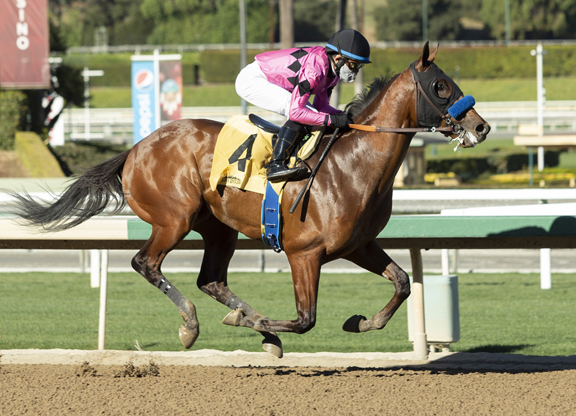 The Gary and Mary West homebred's worktab included a six-furlong bullet in 1:13 (1/11) in Arcadia Jan. 1 and was backed accordingly as the the even-money favorite while debuting with blinkers and Lasix.

He sat a looming presence in second in the early stages and tugged his way to the front under an absolute hammer lock three furlongs from home. The handsome dark bay hit the quarter pole with his ears up awaiting his cue from Joel Rosario, kicked for home in complete command with Rosario still sitting chilly and was never seriously asked in the stretch en route to an effortless 3 1/2-length decision. Mr. Impossible (Munnings) was second.

Purse Strings, a $240,000 KEESEP yearling graduate, won one of 12 starts carrying the Wests' hot pink-and-black silks. She had a colt by Lookin At Lucky in 2020 and was bred back to American Freedom.

This is the extended female family of 2008 champion 2-year-old filly Stardom Bound (Tapit), who brought $5.7 million at Fasig-Tipton November following her victory in the GI Breeders' Cup Juvenile Fillies.

Gary and Mary West also bred graded winner Air Strike, another son of Street Sense out of a Tapit mare.