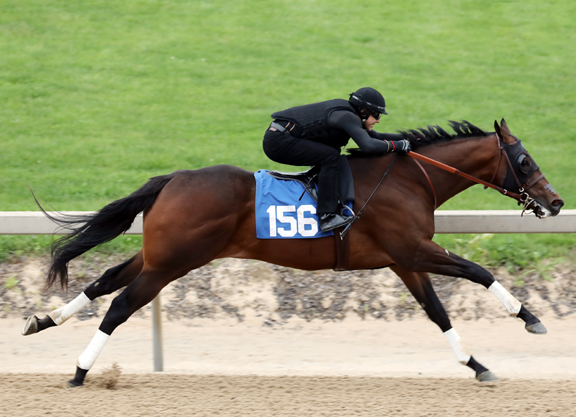 TIMONIUM, MD – The three-session under tack show ahead of next week's Fasig-Tipton Midlantic 2-Year-Olds in Training Sale began on a chilly, overcast Tuesday in Timonium with a colt by Street Sense setting the quarter-mile bullet time of :21 4/5 and four horses sharing the fastest furlong time of :10 1/5. After two days of heavy rain, the session started two hours later than originally scheduled to allow for extra time for track maintenance.

“Based on what Mother Nature had done to us the last three days, the track crew did an amazing job to get it to what we have today,” Fasig-Tipton Midlantic sales director Paget Bennett said between sets Tuesday. “We have a good, safe track. The track crew needed that extra time to make sure the track was the way it needed to be before the first horse breezed over it.”

Grassroots Training and Sales sent out two of the four furlong bullet workers Tuesday and consignor David McKathan agreed with Bennett's assessment of the track.

“I thought they did the best they could with all the weather they had,” McKathan said. “It was safe and that's the most important thing.  All my horses came back good and that's very important. I wouldn't care if it stayed slow the rest of the week, as long as it stayed safe.”

Grassroots sent the very first horse to work over the track Tuesday morning. A filly from the first crop of Grade I winner Competitive Edge (Super Saver), hip 106 promptly set the furlong mark of :10 1/5. A $13,000 OBS October yearling, the dark bay filly is the first foal out of Daddy's Lil Saint (Scat Daddy). Grassroots' second horse of the day was hip 118, a daughter of Weigelia, who also worked in :10 1/5. Out of the unraced Dixiewood (Dixie Union), the filly was purchased for $23,000 by Three Diamonds Farm at the Fasig-Tipton Midlantic October sale last year.

Also in the first set Tuesday, a colt from the first crop of Race Day, hip 152, worked the furlong in :10 1/5. Consigned by Kings Equine, as agent for breeder Spendthrift Farm, the gray is out of graded stakes winner Flashy Lassie (Flashy Bull). He RNA'd for $27,000 at last year's Keeneland September sale.

In the day's fourth of five sets, a colt by Itsmyluckyday (hip 167) was the final of the session to breeze in :10 1/5. The dark bay is out of Golden Gal Al (Monarchos) and is consigned by SBM Training and Sales, which purchased him for $25,000 at last year's Keeneland September sale.

Late in the day, a colt by Street Sense (hip 156) recorded the fastest quarter-mile drill of :21 4/5. Consigned by Top Line Sales, he is out of Forest Fashion (Forest Wildcat) and was purchased by Carlo Vaccarezza for $280,000 at last year's Keeneland September sale.

As temperatures are predicted to warm up in the coming days and the track further dries out, McKathan is expecting a faster surface for the under-tack shows final two sessions.

Asked if buyers will take Tuesday's track conditions into account when evaluating the session's workout times, he said bluntly, “No.” Before adding with a laugh, “And you can quote me on that.”

The under-tack preview continues Wednesday and Thursday at the Maryland State Fairgrounds with sessions beginning at 8 a.m. The sale will be held next Monday and Tuesday with bidding beginning each day at 11 a.m.