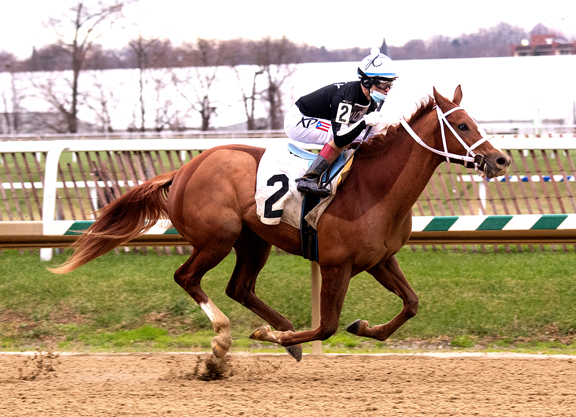 Lucky 7 Stables' Street Lute (Street Magician) looks to rebound off a third as the 3-5 favorite in Laurel's Beyond The Wire S. Mar. 13 and gain her first graded score in the GIII Miss Preakness S. at Old Hilltop Friday. Reeling off five straight wins from last November through February, including the Laurel's six-furlong Xtra Heat S. in January followed by the seven panel Wide Country S. Feb. 20, the chestnut tried a mile for the first time in the Beyond The Wire, but tired late to finish third, beaten five lengths.

“I've always felt she was a better sprinter. We tried her long just because there was nowhere else to run and you've got to find out sooner or later,” trainer John 'Jerry' Robb said. “There's a lot of really nice fillies in here. This will be her biggest test, yet I'm sure. You couldn't work any better, you couldn't go into it any better, and we've got home field advantage.”

Robb opted to bypass the 1 1/16-mile Weber City Miss S. Apr. 24 and point for the Miss Preakness instead. The filly posted her most recent breeze May 7, going four furlongs in a bullet :46.80 seconds, the fastest of 35 horses going that distance at Pimlico that day.

Doug Scharbauer's Red Ghost (Ghostzapper) kicked off her career in style, winning by 8 1/2 lengths in a 5 1/2-furlong off-turf test at the Spa last August but failed to handle the transition to the sod and had to settle for seventh in the Sept. 15 Untapable S. over 6 1/2 furlongs at Kentucky Downs. Returned to the dirt last time, the Wesley Ward trainee came from off the pace to win at six-furlong Keeneland allowance Apr. 16. John Velazquez, who was aboard last time, returns to the saddle Friday.

“She chased a pretty fast pace in her last race. They went 1:09 for the three-quarters,” Alex Lieblong said. “She was there most of the time right up with the leaders, and it was a quick one. She might be just a six-furlong horse.”

The winner of her first two starts, including a muddy allowance score in Hot Springs Jan. 24, the dark bay finished third in a sloppy renewal of the Dixie Belle S. Feb. 28.

“It's a little quick back,” said Steve Asmussen's assistant, Scott Blasi of the quick turnaround from the Eight Belles, “but she'll appreciate shortening up.”