Street Band Looking to 'Bounce Back' in Apple Blossom 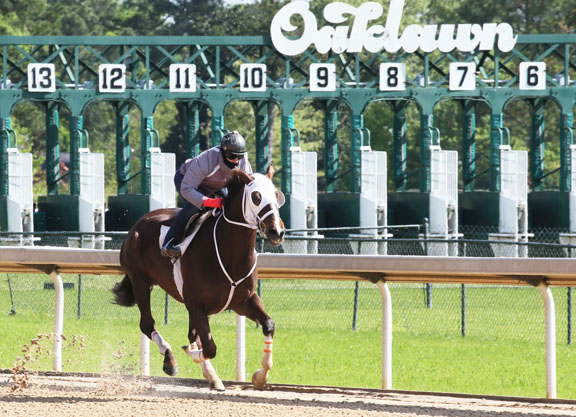 Oaklawn Park, which continues to be Thoroughbred racing's headline act in the midst of the coronavirus pandemic, hosts the Apple Blossom H. this Saturday, the first of the track's two Grade I events. While 2019 GI Kentucky Oaks victress Serengeti Empress (Alternation) figures a warm favorite off her course-and-distance romp in the GIII Azeri S. Mar. 14, trainer Larry Jones is hopeful that Street Band (Istan) return to same form that saw her beat Serengeti Empress into sixth in last year's GI Cotillion S.

“She's doing well, everything seems to be on target,” Jones said. “I couldn't ask for her to be doing any better than she's doing.”

Owned by Jones in partnership with his wife, Cindy, Ray Francis, Medallion Racing and MyRaceHorse Stable, the chestnut has breezed twice since her fourth-place effort in the Azeri, including a bullet five furlongs in :59 flat over the Oaklawn main track Monday morning.

“We just let her do her thing,” Jones said. “She's one that goes out there and she'll usually work :59 3/5 or so, that's her normal, customary work. She went in :59 flat, so she's basically doing what she always does.”

Winner of the GII Fair Grounds Oaks and GIII Indiana Oaks last season, Street Band was a good third to Dunbar Road (Quality Road) in the GI Alabama S. at Saratoga in August. She took advantage of a fast pace in the Cotillion, driving past 'TDN Rising Star' Guarana (Ghostzapper) ahead of an eighth in the GI Breeders' Cup Distaff. She endured a wide trip when third to Lady Apple (Curlin) and Serengeti Empress in the GIII Houston Ladies' Classic Jan. 26 and Jones is willing to give her the benefit of the doubt for the Azeri. Well, sort of, anyways.

“She does not care for those muddy tracks and that's kind of what we got last time,” Jones reflected. “Not that I think anyone was going to beat Serengeti Empress. She got out there on her cruising speed and was always going to be tough to catch. I know my filly does not prefer those [tracks], however she's also a filly that's run every other race and I can't get her out of the bounce/bounceback system. I'm afraid if I break that system it's going to be when she's supposed to bounce forward.

“But this is her bounce-forward race. Her bounce-back race was similar to the Alabama,” he continued. “She ran third in it and then ran lights out in the Cotillion. We're hoping that this will be it. We're going to have a super big field and you have to hope we don't draw a bad post. We drew a bad post in the Kentucky Oaks and we drew a bad post for us at Houston. Even though you don't think of the six hole as a bad post, we still had the widest trip of everybody.”

Jones gave Street Band the better part of three months off following the Breeders' Cup and sees a more grown-up version this year.

“She's gotten a little bigger, a little thicker,” he said. “She's probably a little heavier than she was as a 3-year-old, but she still isn't a 'fat' horse by any means. She's doing well and she's ready.”

Saturday's co-featured event is the GIII Count Fleet Sprint H., in which Whitmore (Pleasantly Perfect) is expected to shoot for a three-peat.