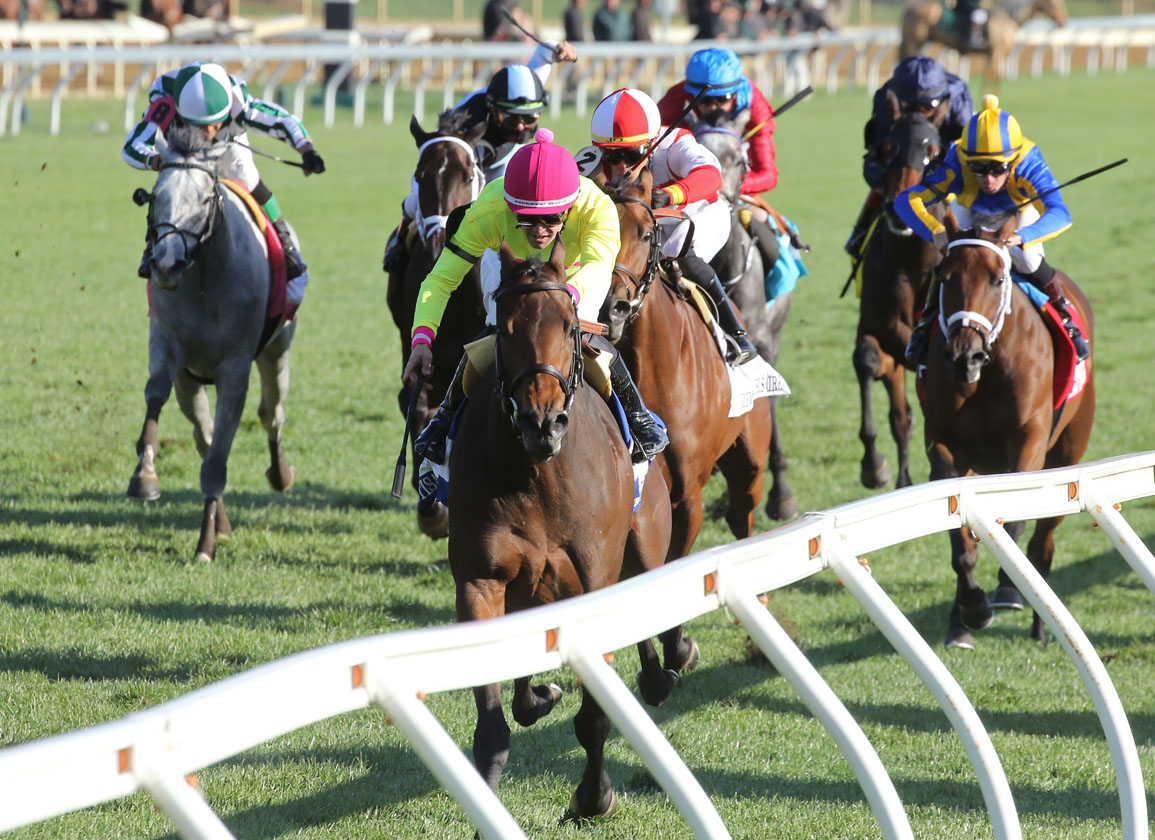 Delayed a few minutes after the gate scratch of Lady Speightspeare (Speightstown), Shantisara, who was sent off at 5-2 behind the slightly more fancied 2-1 European invader, settled just off the early pace as stablemate Technical Analysis led into the first turn while under mild pressure from Empress Josephine and Burning Ambition through a :23.91 quarter. Inching her way forward following a half-mile in :48.63, Shantisara started to put the screws to the front runners midway on the far turn. Overtaking the weakening favorite turning for home, she collared the pacesetter in early stretch and drew off with ease to score by five lengths. Burning Ambition rounded out the trifecta. Empress Josephine faded to last of nine.

Shantisara's margin of victory is the largest in the history of the race, eclipsing the 4 1/2-length victory by Hot Cha Cha in 2009. The win also gave Brown his record fourth victory in the race following Dayatthespa (2012), Rushing Fall (2018) and Cambier Parc (2019) to break a tie he held with Jimmy Toner and John Veitch. Brown also won the GII Sands Point S. with Fluffy Socks at Belmont Park earlier in the afternoon.

“It was a good run and I was really pleased with the draw [post 3],” said winning rider Flavien Prat. “She broke well and I was able to tuck her in right away and she switched off nice. I thought the good horses were around me, and I was able to keep tracking them. She made a really good move around the turn–and when I asked her to make a move, she responded well. I was traveling super and, when it was time to go, she was there for me.”

Jose Ortiz, who partnered runner-up Technical Analysis, added, “She broke good, went to the lead and was a little keen early on. We set pretty decent fractions and I had plenty [of horse left] turning for home, but the other horse was just better. My filly was very relaxed [when they had to back the field out of the starting gate]. She's always a little nervous, but actually when they backed them up she was able to stand a little bit behind the gate and she relaxed a little bit better. I have no excuses; she ran her race.”

As for the beaten favorite, John Velazquez said, “It was going well until I [asked her for more] and she didn't go anywhere. She didn't have it. She didn't show up today.”

Shantisara, a winner of two of five starts for trainer Frederic Rossi in France, launched her U.S. campaign with a runner-up finish in Monmouth's Boiling Springs S. in June before breaking through with a three-length score in Arlington's nine-furlong GIII Pucker Up S. Aug. 14. Stretching out to 11 panels for her latest, she came home a 1/2 length on top in Belmont's Jockey Club Oaks Invitational Sept. 18.

“I expected her to run really well because of the way she breezed last time [five furlongs in 1:03.40 over the turf at Keeneland a week earlier],” explained Baldo Hernandez, assistant to winning trainer Chad Brown. “She improves all the time. She's coming along. This filly, she has a really good talent. She handled the turf really well here.”

Pedigree Notes:
With a Grade I win under her belt, Shantisara (Ire) moves to the head of the class for young sire Coulsty (Ire) and revives a previously prolific female line that had recently fizzled. Second-crop stallion Coulsty, who stands in Ireland's County Kildare at Rathasker Stud, has another Group winner in Santosha (Ire), as well as two additional listed winners, all in his first crop of 45 foals. Shantisara's broodmare sire, European Horse of the Year Dalakhani (Ire), will be far more familiar to Americans with the 41 stakes winners out of his daughters including 2019 English, French, and Irish champion Pinatubo (Ire) (Shamardal). Shantisara is the only runner out of her dam, the unraced and late Kharana (Ire). Interestingly, Kharana's dam was also unraced and her only winner was in Greece. Shantisara's third dam was a listed winner and Group-placed in Ireland, but also produced little of note. However, Shantisara's fourth dam was French champion Kozana (GB) (Kris {GB}), who counted U.S., Irish, and English champion High Chaparral (Ire) (Sadler's Wells) among her grandsons.